What do Pearl Jam, Westlife and todays featured artist Hinds have in common? Sadly they’re not all managed by Louis Walsh and they haven’t all collaborated with Neil Young, but they have all been forced to change their name.

Pearl Jam took their original name from All-Star basketball player Mookie Blaylock, but as he was still playing he didn’t take kindly to the shared branding and they swiftly renamed, allegedly in honour of Eddie Vedder’s great-grandmother Pearl and her excellent condiments. Westlife is actually the irish pop-puppets third name, having originally been called IOYOU, changed probably because it’s a god awful name, before they settled on Westside, only to find out that another band were already using that, nope we’re not sure why two bands would want to be called Westside either!

Hinds name changing moment came almost exactly a year prior to the release of their debut album. The Spanish four-piece were originally known as Deers, which as fans of excellent, but largely forgotten, Canadian indie heroes The Dears, will admit was more than a tad confusing. What could have been a really tough moment for the band soon became something triumphant, it brought them plenty of publicity, as well as a new name every bit as good, and still from the same animal. Name changes, whilst a huge pain in the backside, don’t have to be too disastrous, just ask The New Yardbirds aka Led Zeppelin, The Weak Heartdrops aka The Clash, and even David Jones, who not wanting to be confused with Davy Jones from The Monkees, took the name David Bowie. Rest in peace Starman. 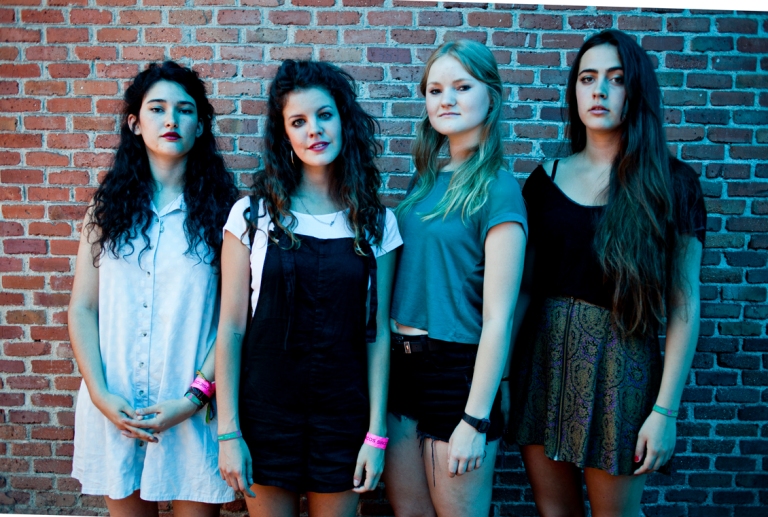 One of our first experiences of Hinds was seeing them perform live, we remain in no doubt that is the best way to experience the Madrid four-pieces music. The band’s lo-fi, chaotic nature translates to the stage as a ray of pure sunsoaked charm; it was messy, ramshackle and an absolute joy. The major question mark approaching Leave Me Alone, the band’s debut album, was how on earth do you translate a sound so energetic and raw into a record that’s actually listenable.

For the most part, Leave Me Alone achieves that aim. The opening salvo of Garden is thrilling; from its drawn out spiky intro, through to a guitar riff that sounds quite a lot like Brimful Of Asha by Cornershop, and yelped drunken nearly-harmonies, which make for a thrilling racket when both voices raise in slightly unintelligible unison. Hinds have admitted they generally recorded all the vocals to the record drunk, even admitting that on the excellent San Diego they got too drunk to really make a good fist of the vocals and had to ultimately settle for a version they weren’t happy with. Despite that it’s one of the albums stand out moments. San Diego is when they fully embrace their lo-fi tendencies; there’s more than a hint of Jeffrey Lewis to the intro, whilst there’s a stunning contrast in the excellent solid rhythm section, the quiet stars of the Hinds show, and the loose guitar lines and vocals that just manage to stay the right side of a complete and utter shambles.

San Diego makes up part of a stunning middle section of the album, alongside Chilli Town and Bamboo. Chilli Town is a perfect musical representation of a teenage house party: you can pretty much hear the jealousy, spiked punch and hormones bouncing off the walls, as they spin tales of ill-advised hook ups and unrequited love. Whilst Bamboo, the song that initially brought them early acclaim, remains arguably their most charming moment, it sounds like The Velvet Underground if they weren’t trying to come across cool. Hinds have admitted taking influence from the likes of Mac De Marco and as demonstrated here they certainly share his sense of not taking yourself too seriously, and not being afraid to share a certain goofy vulnerability; as Bamboo lurches close to falling into wrack and ruin, it is thrilling because of its flaw not in spite of them.

There are moments though where this record falls short, perhaps unsurprising for a band who have been thrust very early into their musical career into a heavy limelight. After Garden, the opening half of the album looses it’s way; Fat Calmed Kiddos sounds thin and a little flat, Easy is simply forgettable whilst Castigadas En El Granero (Grounded In The Barn) threatens to be something darkly different, but quickly falls back onto old ground.  If the first half suffers from a lack of new ideas, the back end suffers perhaps from trying too many; And I Will Send Your Flowers Back threatens to come across as a moment of tenderness, there Pale Blue Eyes moment, but the lyrics hold no depth and the vocal performance, which elsewhere adds so much energy, here is an uneasy fit. Likewise I’ll Be Your Man starts promisingly enough with an acoustic guitar, but then just ambles along without going anywhere new. The whole album could easily be cut by four or five song, and would sound more coherent and interesting because of it; how Solar Gap, a not particularly well executed and overly long instrumental made the record is beyond us.

Ultimately this is a record that perfectly summarises where Hinds are at this moment in time; flawed but charming, messy but exciting. There’ll be time for something more sophisticated, genre-pushing and refined later, for now their drunken harmonies, jangling guitars and goofy charm, should just be enjoyed on face value. There’s a generation of teenagers for whom this band will be the most important thing in the world, and for the rest of us there’s a part of us that will always be that excited teenager, and that teenager would have loved Hinds.

Leave Me Alone is out now via Lucky Number. Hinds tour the UK in February, click HERE for details.