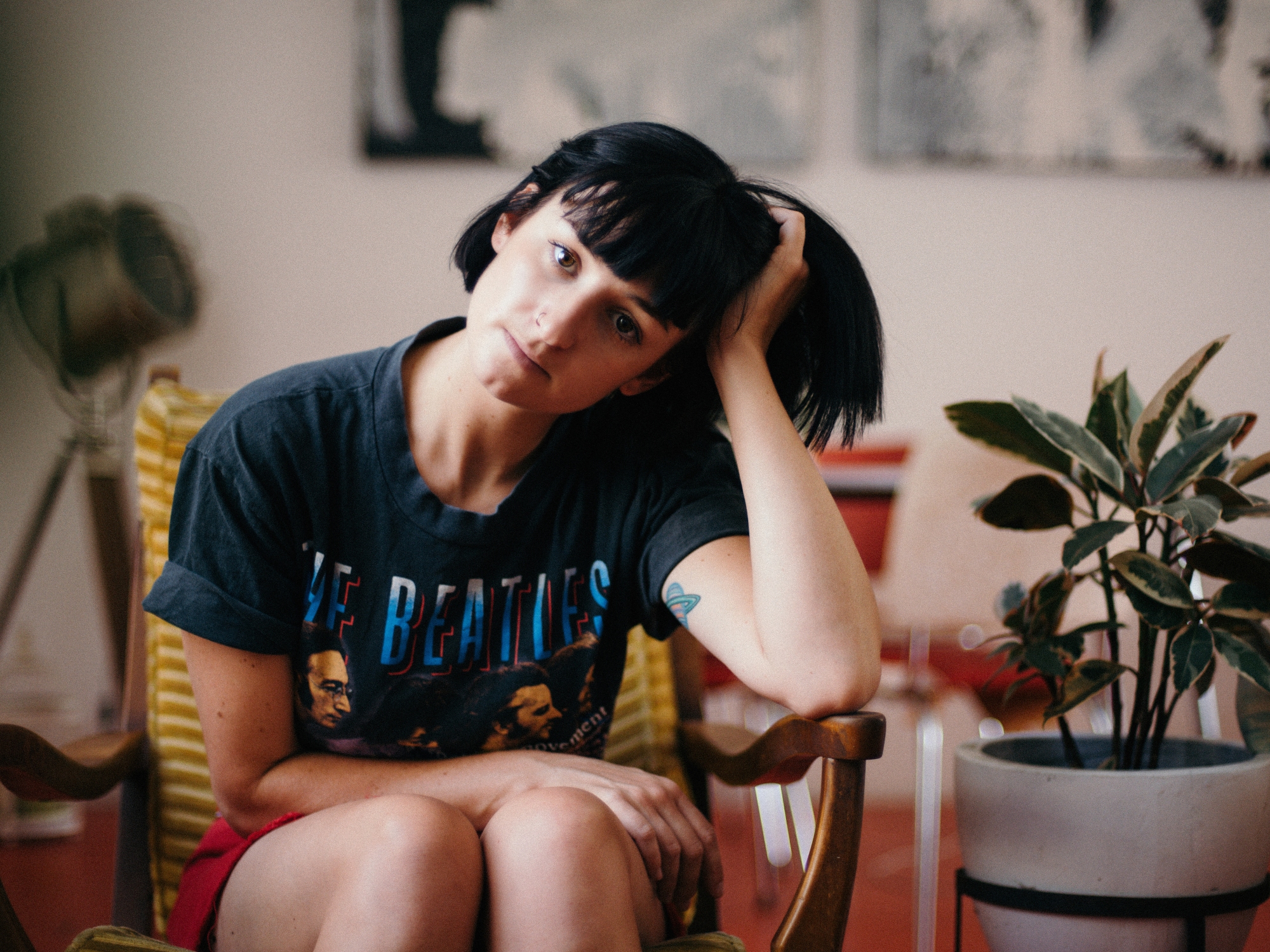 At the very top of our top tips for 2018 was Amsterdam’s Pip Blom, the band/songwriter (we’re never quite sure if Pip Blom is the singer or the band, and maybe it doesn’t matter either way) has certainly started the year brightly with the release of A-listed 6-music mega smash, I Think I’m In Love, as well as tour dates with no less than, The Breeders. We’re of course all waiting patiently for news of the debut album, however we might be waiting a little longer with this week’s announcement of another EP, Paycheck due to land in August.

We’ll forgive waiting a bit longer for the album though, as long as there’s new music as exciting as the first taste of Pip’s Paycheck, new single, Pussycat. Described by Pip’s press release as, “a cockier older sibling to I Think I’m In Love”, Pussycat is a blur of swaggering drum beats and confident, almost Brit-pop sounding guitar lines. As ever Pip’s vocal is a perfect blend of visceral and tuneful, recalling Liela Moss or perhaps even a touch of Shirley Manson. There’s even a Beck reference thrown into the lyrics for maximum credit from us, so basically it’s really great, did you expect anything else?

The may have only put a handful of tracks into the world but Jessica’s Brother are already firm favourites around these parts. A vehicle for the songwriting talents of Tom Charleston alongside drumming-legend Jonny Helm and bass maestro Charlie Higgs, the band have this week shared news of their debut album, out in July, as well as their brand new single Humdinger.

If you’re going to call a track Humdinger, it had better be, well, a humdinger, and thankfully these chaps know what they’re doing. Probably their most languid and sun-drenched moment to date, Humdinger, is a wonderful fusion of serenity and the quiet feeling that it can’t possibly last, as Tom explains it is, “the one song on the album where the narrator is at ease with himself and the world. Though there are moments where this tranquillity is nudged by outside tremors, so we know this moment is ephemeral.” Musically, it never gets above a gentle shuffle, yet in the easy languid bass, meandering guitars and steady, perfectly judged drums, there’s more than enough to hold the listener’s attention. This laid-back style also allows Tom’s lyrics to shine, as his vocal, sometimes accompanied by a female vocal (as far as we know unidentified), sing out, “lo humdinger, I’m just a lazy singer with my mind in two.” Always poetic, always musically intriguing; sure it’s unlikely to make much of a fuss, but make no mistake, Jessica’s Brother’s debut album might just be one of 2018’s most exciting.

Grammatically challenging though their name may be, the return of Australian born rock-duo An Horse is something well worth celebrating. Returning with their first new music since 2011’s Walls, An Horse have this week broken their, “half decade hiatus”, with new single, Get Out Somehow. It’s been a difficult time for the pair, with personal tragedy and creative insecurity putting the band on the back burner. Like all the best hiatuses though, it’s thankfully over, “we realized after we had some time alone to breathe,” explains drummer Damon, “that we needed to once again listen to ourselves and just have fun with the music.”

That sense of fun and adventure is evident within seconds of Get Out Somehow: the frenetic guitar line and pounding drum beats are instantly awash with energy and fizzing with life. Lyrically, it’s as poignant and nuanced as ever, the pairs ability to chronicle the minutiae of everyday living with a hook-laden pop chorus remains undiminished. The shout-alongable chorus repeats, “you’ve got to do what you gotta do” and for An Horse perhaps what they gotta do is make rollicking, hopeful, inspiring pop-bangers.

Get Out Somehow is out now. Click HERE for more information on An Horse.

2. Get The Slowcoach Down

Few bands are doing a better job of showcasing the rage of the modern musician better than punk-trio Slowcoaches. Whether rallying against toxic masculinity or snarling in the face of a political system that does little for the youth of today, there’s a refreshing honesty to every thrash of guitar, clatter of drums and vocal yelp. This week the band have shared new single, Found Down, the latest taste of their upcoming second album, due later this year.

Found Down, continues the bands run of biting social commentary, with the mainstream firmly in their cross-hairs, as vocalist and bassist Heather Perkins explains, “it’s about how the ‘struggle’ of the artist is glamorised by mainstream labels via the media in order to sell records.” The reality of that struggle is of course only too evident as bands struggle to make ends meet, maintain their mental health and to just keep going, as the band repeat at the songs climax, “it’s a hiding to nothing.” Thankfully keeping going is just what so many bands and artists do, a world without them wouldn’t be a world worth fighting for.

Found Down is out now via Leisure & District. Click HERE for more information on Slowcoaches.

Currently in the midst of her debut UK tour, wrapping up this Sunday at Hoxton Square Bar & Kitchen in London, Melbourne’s BATTS has this week shared her new video to the excellent single Shame. The track is the latest taster of BATTS’ upcoming debut album, the follow-up to the superb, space-themed EP, 62 Stars.

While still with one eye on the skies, Shame is in many ways more rooted to Earth than BATTS has ever previously been. The track tackles the great shame of our age, the gradual, or perhaps all too rapid, destruction of our planet, “I was hoping that the way that we think, is not the way that we’ll think in a little while, honey I’m losing hope.” The track casts the romantic notion of shooting off to another planet where, “Bowie watches us through the stars”, while ultimately knowing that is not the answer to our issues. BATTS’ message is delivered with her most musically impressive offering to date; the prominent tumbling bass accompanied by delightfully loose guitar work and the stunning vocal, the middle ground of Angel Olsen’s clipped tones and Lucy Dacus’ more emotive, held notes. BATTS might dream of floating off to the stars, pretty soon she’s going to be a very bright star in her own right.

Shame is out now. Click HERE for more information on BATTS.