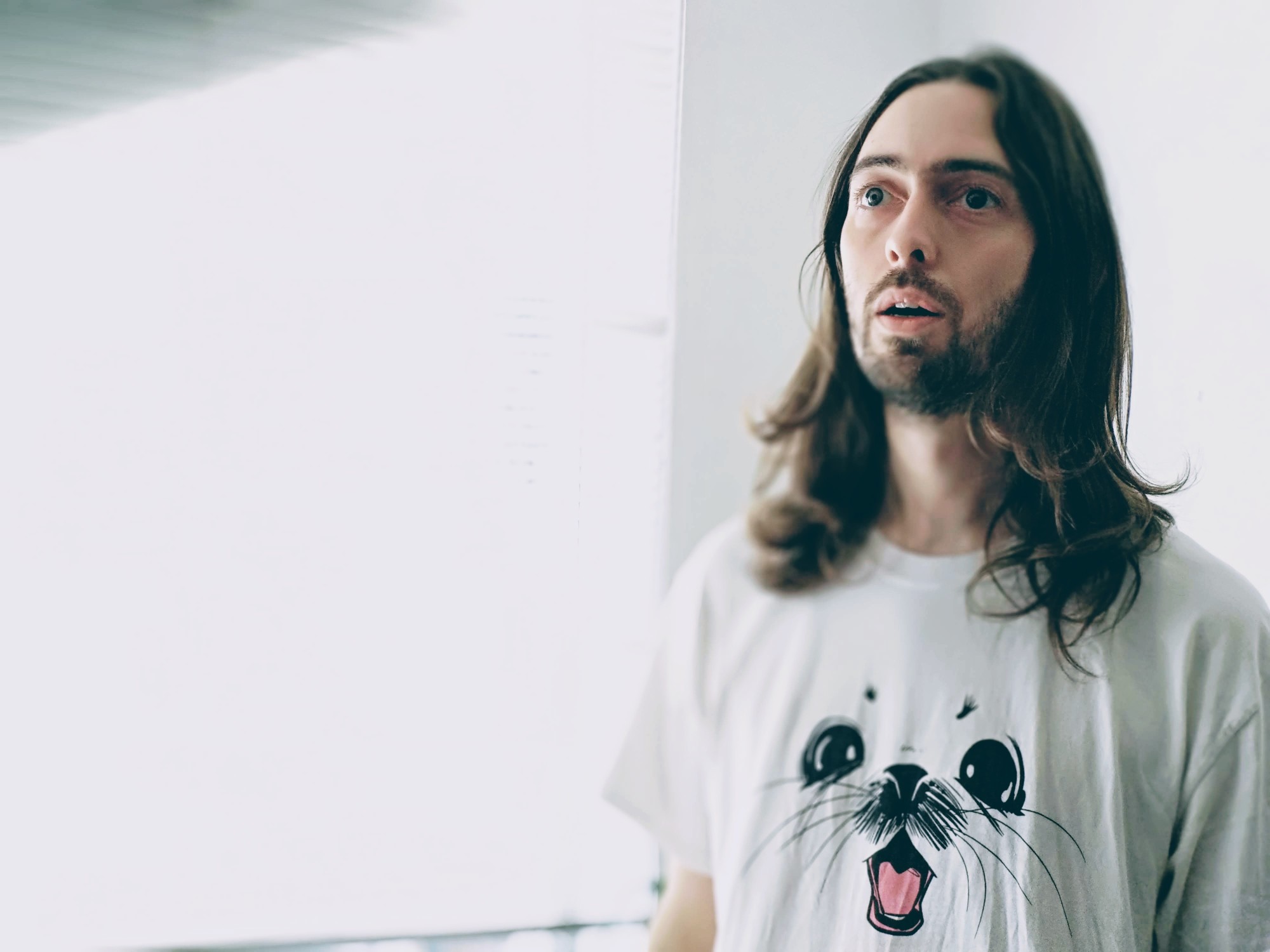 Some people say there’s nothing new you can do with music, some people have never listened to Benjamin Shaw. The globe-trotting musician, born in Blackpool, raised in Canada and now hanging out in Melbourne, has just released his first new material since 2014, in the shape of brand new album, Megadead, put out by the excellent Audio Antihero imprint.

In many ways, Megadead picks up where Benjamin left off with 2014’s Goodbye, Cagoule World; certainly the completely uncommercial, experimental and slightly weird-in-a-good-way edge remains. There’s the odd recognisable influence; a touch of Elvis Depressedly creeps into PUSH IT DOWN, Four Tet might start a song a bit like Terrible Feelings!, Blue Teeth Thursdays could almost be Sufjan Stevens only a lot more violent; yet for the most part this is a record that sounds like nothing other than the genius mind of Benjamin Shaw being poured out and documented for all to see. The atmosphere throughout is stunningly constructed, despite the maze of samples, electronics and warped sounds, Benjamin creates a feeling of the purest human variety, you can feel the loneliness and solitude throughout, even the sense of boredom, a theme little explored in the arts, is perfectly realised, why else would you make an amalgamation of weirdly distorted, child like, sing-song and Sigur Ros levels of beauty and call it a pop song, yet that’s exactly what the stunning Melanomates sounds like. Perhaps ultimately the greatest appeal of Benjamin’s music is surmised by his own statement, “the truth is, making up stupid songs and recording them in my bedroom is the only thing that gets me through each day. Going to my shitty job is rubbish. Sitting with a keyboard and a laptop on my bed and losing hours to music is magical.”

FTR: For those who don’t know who is Benjamin Shaw?

No hoper, serial moper, making up friends like I never been doper. Talented artist, versatile singer-songwriter, with chronic emotional tension in the jaw and forehead. I don’t know, I’m a bit of a mess I reckon, with a new album out called ‘MEGADEAD’, about all of the above. Thanks for having me, For The Rabbits. Your site is lovely.

I’d played in various terrible bands throughout my teenage years, but my first solo gig was at one of those Peace One Day festivals they used to have around the place. They might still, I don’t know. Anyway, it was in my hometown so I knew the girl organising it and she got me a last minute slot. I didn’t tell any of my friends or family, and I was highly unsuitable anyway. So I guess not much has changed.

FTR: What can people expect from the Benjamin Shaw live show?

I haven’t played in a while, tbh. But they usually involve me running to the toilet just before my set starts, then making overly self-deprecating jokes to a largely indifferent crowd. I remain aloof throughout, while at the same time secretly becoming increasingly agitated if I’m not given full attention at all times. Fun for all the family!

When I was a kid, drawing cartoons and comic books was all I wanted to do. I even went to uni to do a ‘Fine Art’ degree, made some terrible art and then dropped out after the first year, through sheer laziness, immaturity and a healthy dose of depression, I think. I can’t imagine anyone even knew I existed. I still do want to make a comic book one day, really. It’s still there. But music was always there too. There’s something so instant and rewarding about playing music. You sit down at a keyboard, or pick up a guitar and melodies just come out. You can save them, work on them and make them into something more substantial, or just leave them there. It’s pretty nice and therapeutic at lot of the time. It’s also hellish and drives me mad. Still, I just bought one of those new cheap iPads with the pen, and I’ve been making a different drawing for each song on this Megadead album, and it’s the best thing ever. So come have a look at @bnjmnshw on Instagram if you’re feeling bored.

FTR: What’s next for Benjamin Shaw?

It’s been a long time since I’ve felt this good about art and music. I think because my partner and I downsized everything, moved into a shitty small flat and got just part time jobs. Just to try and concentrate on health and life and have more time for making shit. We are broke, and will never have a pension or own property (no change there tbh), but it’s pretty damn nice and I don’t ever want to go back. So assuming I get my shit together, the future is hopefully just more art, more music and more sitting about reading comic books eating broccoli.

Both heartbreaking (for obvious recent reasons) and utterly uplifting.

I’ve liked Dear Nora for a while, but there’s something super nice about this new album. It’s got that Classic Americana feel to it at times, like Springsteen or Jackson Browne or something and I can’t stop listening to it right now. It’s playing merry hell with my last.fm stats.

Jack Cooper is from my hometown, Blackpool, so this album specifically about that town hit home with me right away. The “if I stay I disappear” line puts a name to the thought I probably didn’t even know I had back then. Also, I was once booked to support a Meatloaf cover band in Fleetwood as one of my first solo gigs. I turned it down eventually, for artistic reasons, but I still regret the decision.

At the risk of looking like a crusty old white guy trying to stay relevant by name-dropping some grime artists, that’s exactly what I’m doing. It’s in my head all the time, and It’s a great mixtape, sorry. So while we’re here in the north with Jack Cooper, here’s Manchester’s own LEVELZ. The video kinda reminds me of my youth too. In a terrifying way.

I’ve been a fan of this timeless artist for a long time, but this one off his new album is a true classic, with a passionate message that everyone should experience.

Megadead is out now via Audio Antihero. Click HERE for more information on Benjamin Shaw.

One thought on “Get To Know – Benjamin Shaw”