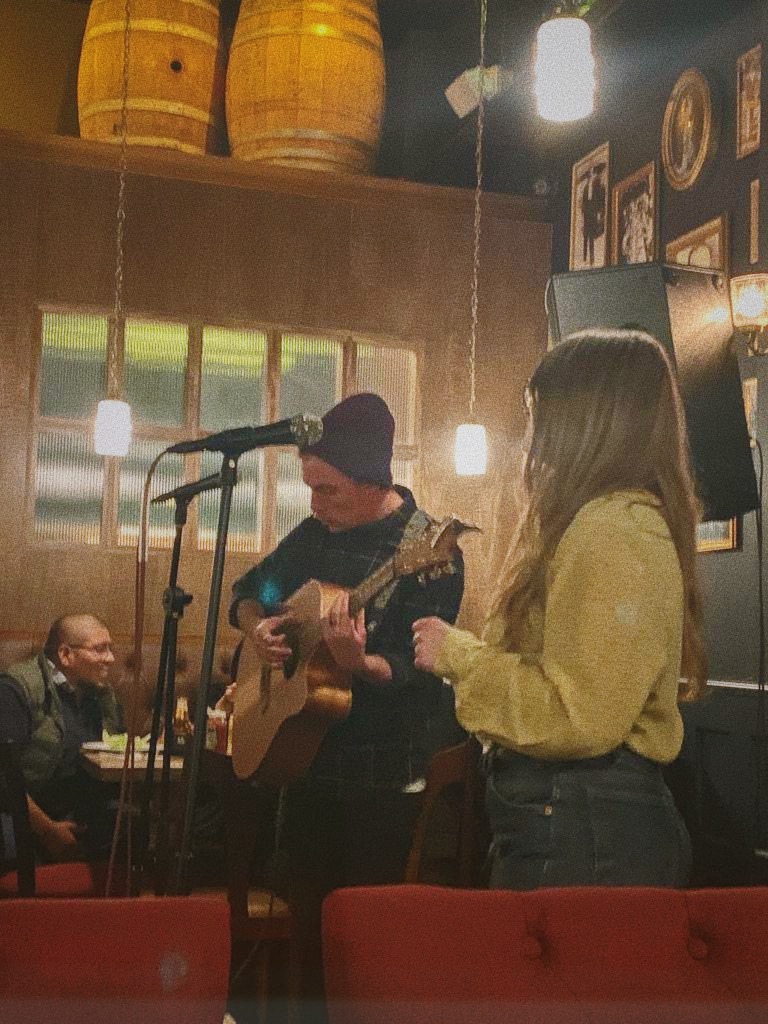 The story of Permanent Vacation is a distinctly multi-national one, two musicians from the US and UK respectively, they met in Rome, and have subsequently relocated to Mexico City. Formed in 2020, the band have wasted no time in sharing their music with the world, self-releasing their debut EP, Blue Moon, before teaming up with Z-Tapes in March this year for the release of the mini-album, A Love Song For Everyone. For their latest offering, Hymns from the Backseat, which they released last month, the band have embraced their global side, with the album recorded in four different countries as it explores life in an uncertain world.

Discussing the record, Permanent Vacation have spoken of it as, “a concept album for your twenties”. The record follows a widely relatable character as they journey through both their exterior and interior worlds. Across its eight tracks, Hymns from the Backseat explores ideas of trying and failing at love, struggling to find your place in the world and searching for meaning in a world that doesn’t always willingly offer it.

If the album is a thematic stride forward, musically too it finds the band exploring new ground. The record open’s with the haunting strains of Zócalo, the track brings to mind the beautiful music of Magana as vocalist Juliette is accompanied by the gentlest of acoustic guitar lines and distant swooping-slides. Elsewhere, Midnight Diner adds a certain far-Eastern quality to the percussion reminiscent of Cross Record, while the layered vocals and processed beats of Statica come across like the middle ground of The XX and Cocorosie. Possibly the finest moment comes at the record’s end with the title track, it’s possibly the closet they get to a straight-up folk song with the gorgeously subtle guitar-line holding the piece together, as the vocal runs free, an untamed thing of beauty, bristling with emotional heft and melodic delicacy.

Following the record’s release, I spoke to the band about their musical ambitions, the importance of record labels and how music helps make sense of a world that, “can be a confusing and chaotic place”.

FTR: For those who don’t know who are Permanent Vacation?

We’re a bedroom pop/ indie folk band originally from the UK and USA. We formed in Rome in 2020 and are now based in Mexico City.

FTR: You’ve just released your second album, Hymns from the Backseat, what can you tell us about recording the album?

The album is special to us because it was written and recorded in 4 different countries. It was written during a moment of personal uncertainty for us, so we feel proud to have been able to capture many emotions and bits of different journeys.

FTR: What made this the right time to record an album, what did you do differently compared to your debut album?

So many things were up in the air this summer, but this album is sort of like a thread between those events. We don’t know if there’s ever a ‘right time’ to record an album. It’s something that happens when the concepts come to fruition. The writing and recording process differed from our first album in the sense that this one is far more electronic so we spent a lot time building up textures and soundscapes until they become whole.

FTR: Where does the title Hymns from the Backseat come from?

The album tells a story, one about growing up, getting older and learning to face things from your childhood that shape the way you act as an adult. Hymns from the Backseat is a reckoning, meant to evoke images of both a child on the way to church and someone black out drunk in the back of an Uber. Maybe they’re singing, or maybe they’re praying.

FTR: Who are the influences on you music? What were you listening to when you wrote this record?

We have some artists that tend to influence what we make no matter what – these range from Joni Mitchell and Nick Drake to Mac Miller and Frank Ocean. Specifically during the writing of this album I (Chris) was listening to a lot of hypnotic and generally electronic music like Tirzah, Mary Lattimore and Julianna Barwick.

We started making music during the pandemic. We’ve released two albums and an EP, and just recently had our first proper gig. We certainly look forward to playing live more.

Listening to DIY artists. Supporting small labels. Paying for stuff you like on Bandcamp. In the social media age, sharing and engaging with things online is so important. You don’t have to pay to show you care – even something as small as a private message saying ‘I loved this song’ means a lot.

FTR: The album’s coming out on Z-Tapes, how did that come about? Do you think labels are still important?

Z Tapes worked with us on our first album and they’ve been very supportive since we started. Filip and Angie put so much love and care into their releases and their artists and we feel very lucky to be able to do this with them and to be a part of such a positive community. As for the second question, I believe working with a label is an important and valuable thing to do only when it’s a person or collective that you see eye to eye with.

FTR: Now shows are beginning to start up again, what can people expect from the Permanent Vacation live show?

For the moment, our live shows are a stripped down and intimate affair. This is something we would like to change going forward though and we’re currently figuring out how to effectively play our electronic material live and how to have a more full sound in general.

The world can be a confusing and chaotic place and making music helps us contextualize things.

We like to write, draw, cook and take photos.

We are not particularly interested in turning this into a career. As for the record, we hope it reaches as many potential fans as possible and it’s a bonus if they want to buy a tape.

FTR: What’s next for Permanent Vacation?

We are a few songs deep into our next record which we’re really excited about. We are trying to look for shows here in Mexico, too.

Hymns From The Backseat is out via Z-Tapes. For more information on Permanent Vacation visit https://prmntvctn.bandcamp.com/.