As the cocktail bar down the road from me says “Valentines Day. Blah Blah Blah, Drink”

Yes my wonderful followers it is indeed that day of manufactured romance named after some saint who didn’t have much say in the matter, but for the purposes of todays blog, believe it or not, I am going to attempt to suspend all cynicism, I shall not rally against the greeting cards manufacturers, no, no no, I shall attempt, against all better judgement, to (ahem) get in the spirit!

We talked death the other day after all so we need some light relief, and love is of course a pretty darn common theme in pop songs. As long as there’s been pop music, there’s been love songs. In fact some of they very best love songs date back to the early days of pop music, take Sam Cooke’s “You Send Me” all vinyl crackles, and cooed backing vocals it’s a very to the point letter to the one he loves. He sings “at first I thought it was infatuation, but ooh it’s lasted so long, now I find myself wanting to marry you and take you home” well maybe it’s a bit much Sam we’ve only just met, but what the heck, I’m sure you’ll treat me alright! (Ok so the 50s also gave us Hank Williams, singing “Your Cheatin’ Heart” and Elvis was in the Heartbreak Hotel, but those two cynical old hacks can for one day only take a running jump)

The 60s saw The Beatles burst onto the scene, and boy did they know there way around a love song, from She Loves You to I Wanna Hold Your Hand those scouse trouble makers were causing girls to go weak at the knees and love songs were clearly all the rage. While across the Atlantic arguably the greatest love song of ever was being concocted by Phil Spector and The Ronettes, “Be My Baby” may get everyone else up and dancing around, but to me it just makes me want to sit down and cry a bit at how bloody beautiful it is, also there were once rumours Brian Wilson used to listen to it 100 times a day, which whilst clearly nonsense is a good enough rumour that I’m going to believe it and be bloody happy about it!

With the 70s we got prog, and latterly punk. Ok so perhaps there wasn’t a whole lot of love on show. Fleetwood Mac were falling apart at the seems, The Sex Pistols were too busy sticking it to the (wo)man and Joy Division were, well, too bloody miserable to sing about girls in anything other than a horribly sad way. There were plenty of tracks about sex, but probably the most famous love song of the decade was Donna Summers “I Feel Love” and in my humble opinion there are few more overrated songs than that.

Where did all the love go? It certainly didn’t seem to make much of a dent on the 80s, The Pet Shops Boys were telling us it was a sin, New Order were stuck in bizarre love triangles, and The Smiths for all the romantic foppishness on show weren’t exactly loved up now were they. Indeed it does seem somewhere around 1975 the hay day of love songs was over, replaced by a new breed of downbeat miserableism that has continued to permeate pop music ever since, and for the most part thank god for that. I mean yes it’s great for a song or too but who really listens to pop music to hear someone feeling good about themselves? I mean come on people it’s valentines day but sad songs rule alright! For every good love song there’s hundreds of songs about it all coming crashing down. I’ll take the wonderful Blur song (with Graham on the mic) “You’re So Great” and it’ll be brilliant, but it’ll be made a lot more brilliant if you stick the entirety of 13 on the end of it so we can all have a good cry! Yes Tom Waits wrote “San Diego Serenade” and “Jersey Girl” they were lovely and that but “Blue Valentine” was better, and so was “Better Off Without A Wife” for that matter! Sad songs are just better, you can save all the happy shit for car insurance adverts! Now pass me that piano I’ve got a minor chord ballad to write…

Ok I couldn’t do it…cynicism wins out in the end. Maybe Tom was right, there just ain’t enough raised right men…

Talking of sad songs…let’s get on with the feature 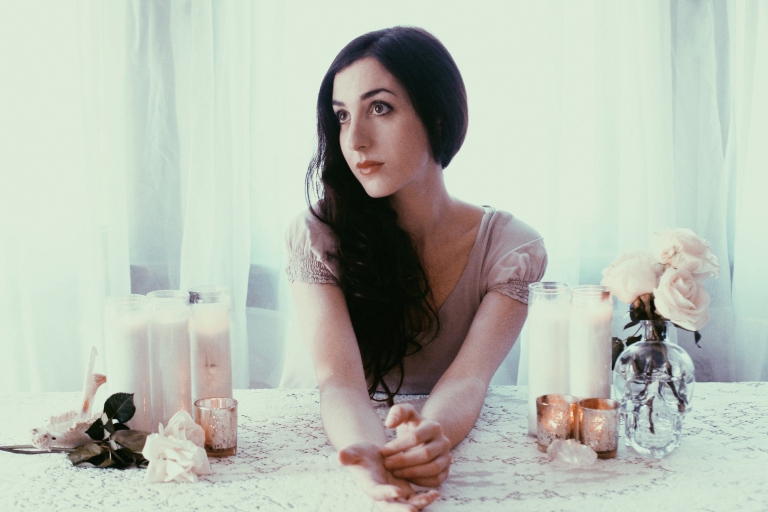 Who?
Well Marissa Nadler of course, on her latest record she’s joined by a whole host of collaborators, but on earlier recordings she was a true solo artist doing everything on show, from organs, to 12-string guitars this very talented lady can pretty much play it all!

What?
Well the words ethereal and neo-folk get chucked around near her on a regular basis and despite the fact they’re disgusting terminologies maybe they give you an idea. Haunting vocals, swooping strings and a host of beautiful sounding stuff. Cracking lyrics as well, normally about the changing of the seasons, calling people you’re not meant to and trying to move on with your life.

Where?
Boston, Massachusetts born and raised. Though she spent time at art college studying painting in Rhode Island and spent some time in New York being an art teacher. God knows how she found time for all that malarkey when she had all these brilliant songs to be writing!

When?
Well she’s been Marissa Nadler since she was born which was 33 years ago (which is hard to believe as she doesn’t look a day over 21) Her first record “Ballads of Living and Dying” was released way back in 2004. Her latest effort “July” was her sixth record and it came out on Bella Union over here and Sacred Bones over in the states (which are two pretty wonderful places to release a record I’m sure you’ll agree)

Why?
Short Answer: Because it’s a bloody lovely record! Long Answer:  For starters there’s that stunning mezzo-soprano (ooh ark at me with my fancy terminology) voice, Pitchfork described it as the sort of voice “you’d walk into Hades for” and you can imagine her sending Greek sailors everywhere crashing into rocks left, right and centre. She’s also growing as a songwriter, the likes of “Dead City Emily” and new single “Was It A Dream” show off her supreme ability to mix technical ability and subtle hooks. Her use of repeated imagery and metaphor throughout the album also ties everything together and makes the album a wonderfully cohesive body of work.

Why not?
There’s a tendency for melodrama and occasionally she does veer dangerously into Lana Del Rey territory (though it is like the best Lana Del Rey song you’ve ever heard) Basically pop music this ain’t , they’re more like a bunch of flowers (apt for Valentines day) that slowly unfurl their beauty onto the world, but beautiful they most definitely are, and unlike flowers they don’t wilt and die after a while, they just keep getting better and better and better…

Marissa’s sixth album, July is out now on Bella Union (UK) and Sacred Bones Records (US). She plays London’s Café Oto on April 23rd as well as touring across the UK and Europe throughout the spring (even playing Halifax for some reason)

One thought on “New To Me – New To You: Marissa Nadler”