At the Midlands Railway Centre, home each year to the Indietracks Festival, the bar stocks no lager on tap; only locally sourced ale and a variety of slightly toxic looking, and incredibly strong ciders. I question one of the volunteers, acting as our bar keepers for the weekend, as to just how local the ale is “it goes as far as the end of the track” is his reply.

Somehow this anecdote seems to neatly summarise the festival, it’s a little microcosm, situated far from the crushing reality of the every day grind. Whilst other festivals daub their sites with corporate sponsorship, or present a sort of false attempt at being the opposite, whilst seeking endorsements from every trendy publication, website or brand going, Indietracks in many ways is the real alternative. It truly is run by a group of people who, as Allo Darlin’ put it in Silver Dollars, do this because they love it; and judging by the enthusiasm and anticipation flowing through the small but perfectly formed audience who arrive on the Friday night, the crowd love it just as much as they do.

Friday at Indietracks is something of a taster for what’s to come. All the bands are placed on the main stage and proceedings don’t kick off until the early evening, none the less in the four bands playing this, the opening night, there was plenty to be excited about.

First up are TeenCanteen, in their own words, they are “four girls split between Glasgow and Edinburgh”. Their arrival onto the outdoor stage (even the stage name here are delightfully unpretentious) is to a frankly beautiful scene. Steam train carriages lie dormant in the background, as the sun gradually winds it’s way down behind them, bathing the (generally quite pasty) audience in the warming glow of a late July evening. Their faces daubed in glittering face paint, and in some cases glittering dresses and glittering leggings as well, TeenCanteen are very pop with all the harmonies and choruses you’d expect. In tracks like Cherry Pie and the new single You’re Still Mine, they possess some killer tunes with proper chart potential.

Spearmint are one of a number of bands playing this weekend who have recently reformed. Originally formed back in 1995 they dabble in a slightly dated take on catchy 90’s indie. They do possess some excellent pop songs, and a delightful line in self-deprecating stage banter, “we’re going to be in the merchandise tent if anyones wants to complain or anything?”

One of the most anticipated acts of the weekend are The Chills. Originally formed in 1980, they have recently got back together for a substantial jaunt across Europe, taking in Indietrack and culminating bizarrely and brilliantly at the Commonwealth Games! They seem overwhelmed by the response they have received across the continent, and tonight is no different. The band run through a series of excellent, and fairly downbeat indie numbers. Highlights include a number of the bands, should have been, hits, including Pink Frost and best of all the moving, I Love My Leather Jacket, a reference to the beloved piece of clothing left to singer Martin Phillips by the bands late drummer, Martyn Bull. The most impressive thing about the set, is that what could have been little more than a jaunt down memory lane, is in reality an exciting snapshot of a band who sound like they’ve never been away, and might now be back for a long time. They remain one of New Zealand’s greatest ever bands, though as we’ve discussed previously they don’t produce many!

There can be few examples of a band as well suited to a festival as Allo Darlin’ are to Indietracks. Whilst they were wonderful at End Of The Road last year playing an afternoon set to a slightly drowsy audience, here in what is surely their natural home, they take to the stage with the confidence of a band who feel entirely at ease on the stage they occupy. So confident in fact they start with three new tracks. The first talks of “dusty towns of student bars” and borrows a melody from the Inspiral Carpets classic, This Is How It Feels. The second is a more downbeat number, seeing Elizabeth noting “I’m afraid I’ll fade away” before pleading “please believe me, I’ve never said this before.” The third, and best, new track is punctuated with the sound of a classic late 80’s pop song, and shows off one of the bands key skills, seeing the beauty in life’s little details, as with the tracks killer line “I realised I loved you, it was like everything I’d ever lost had come back.” It’s beautiful, the romantic sods have done it again with this one, and it’s a tantalising glimpse of their forthcoming third album. 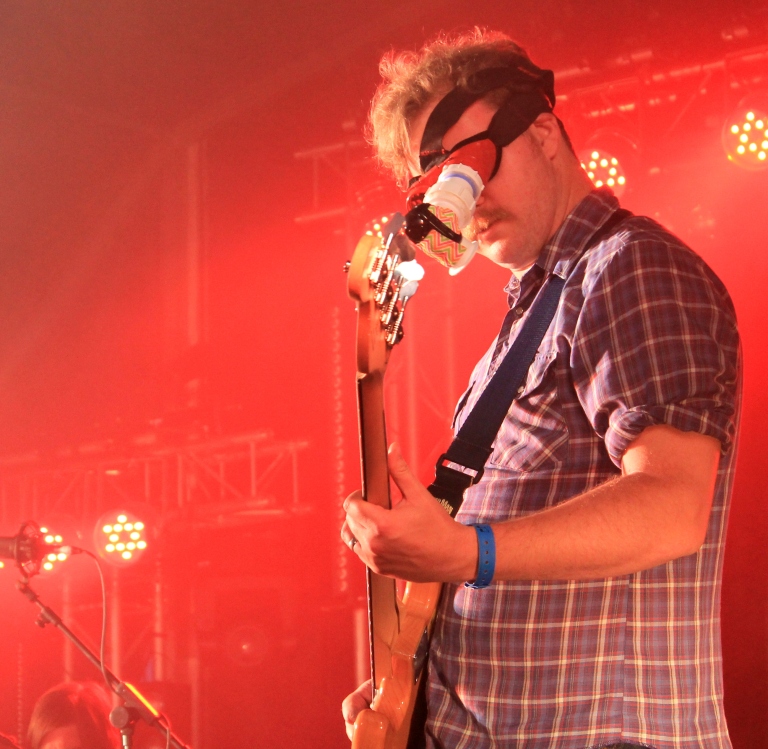 What follows is an outstanding set borrowing from throughout the bands career. As they tear through the outstanding Wonderland, the brilliant outro/chorus plays out and Elizabeth sings “it feels like the world is ending, and I don’t care, because I’m with you” the intimacy the lyric implies is not for two people tonight, but for the entire audience, they’re so happy to be here, that the excitement spills out via the age old mediums of dancing like a loon and bouncing up and down on the spot. The atmosphere is incredible, even the photographers down at the front jumping out of the photo pit to join in the dancing!

As the band don Muppet-esque headwear as part of the concert being recorded, they might look ridiculous, but they remain a delight to watch. Paul’s guitar playing is a revelation, he’s not a showy player but the swelling, jangling sounds he gets from the instrument is one all his own. Bass player Bill Botting seems to play constantly on the balls of his feet, ready at any moment to launch into one of his many bouts of bouncing, the bands bundle of energy, he’s always a captivating watch.

Elizabeth takes centre stage for a delightful version of Tallulah, that draws the crowd to near silence (isn’t there always one person who seems to miss the it’s time to shut up memo!) It remains a spine-tingling track about the touring the world and still thinking of those you left behind. The joyous and inclusive nature of this set is shown again by a number of special guests. The kind of special guests that in 90% of venues would draw just baffled looks, but here at the Indie-pop Mecca are household names. Emma Kupa, formerly of Standard Fare, joins the band for Silver Dollars, a song about the financial struggles of being in a band shouldn’t be allowed to be this fun. The Just Joans then roll out for the first of the weekends many, many versions of If You Don’t Pull (and they weren’t just all me singing it nearly constantly). It’s probably the catchiest song ever written, and also the most delightfully accurate portrayal of young folk on the pull, and the pressure that comes with it. It couldn’t have a more receptive audience, all too well aware of the sexual tension in Indie-discos up and down the country! The rendition is so deliriously fun, that security even get involved, rushing to the front to…take photos! Seriously? Never seen anything like it!

Allo Darlin’ return to rapturous applause for a version of Kiss Your Lips, that segues into Paul Simon’s Call Me Al, resplendent with the hotly anticipated bass solo the whole evening had surely been building up to? They leave the stage for the final time, the crowd seemed to include no doubters left to win over, but if there were surely they’ve done it now?

The punters disperse, to bed? Pah! To the disco?! Full of the joys of summer, full of orange cider and full of that wonderful, unbeatable feeling that you’ve just been part of something very special indeed.