Not all gangs are about drug running and violent crime, the word has taken with it the problems of the criminal underground but in reality a gang is just a group of people who define themselves in opposition to societal norms and identify as part of a group. On these grounds aren’t we all part of a gang? Don’t we all want to feel part of something more than just ourselves and what the world thinks of us?

Music history is full of gangs, groups of people who looked at the world and said we don’t want to be you, we want to be us. The punk movement might seem the obvious place to start, but way before that there were pockets of musicians opposed to what they saw as the norm, arguably the first great modern musical battle was between fans of trad and modern jazz; just ask Philip Larkin his opinion of modern-jazz, “jerky” “unnatural” and even “cacophonous” and in particular Miles Davis’ “passionless creep” of a trumpet, and you’ll see the rift runs deep. Of course you can’t actually do that because Philip died thirty years ago, but it does beg the question: were the modern-jazzers the earliest musical gang?

The beat generation, who’s central elements could be summarised as: “rejection of standard narrative values, the spiritual quest, exploration of American and Eastern religions, rejection of materialism, explicit portrayals of the human condition, experimentation with psychedelic drugs, and sexual liberation and exploration” could certainly be considered a gang of sorts;, certainly there’s a romanticised feeling of togetherness about the group, their use of illegal drugs, open and often illegal sexual practices and refusal to play by the previous generations rules certainly fit neatly into the gang mentality.
It is hard to think of musical gangs though, without thinking of punk. The Ramones, The Clash, bands of brothers, in matching leather jackets, fighting injustice and society at every turn. Less a musical movement, a more a subculture, Punk sprung up in the 1970’s, simultaneously making waves in most of the western world, described rather brilliantly by John Savage as a “bricolage” of almost every previous youth culture in the Western world since World War II, “stuck together with safety pins.” Punk stood simultaneously stood for everything and nothing;, a dedication to anti-establishment behaviour, non-conformity, anarchy and not selling out. The influence of these gangs has remained in almost every great musical gang since, from Joy Division through to The Strokes, punks ethos and image has punctuated so many groups of like minded young-men, and made them pick up guitars and form bands!

In recent years there’s been a noticeable rise in female gangs; groups of women united by musical tastes, style and feelings of anger at the continued abundance of sexism, are following in the footsteps of every disadvantaged group, and starting to pick up guitars, and shout about it, and it’s absolutely thrilling! The likes of Hinds, Warpaint and The Wharves have shown that like minded women, standing up together can make “real” music just as well as the boys, if not even better, and long may that continue! 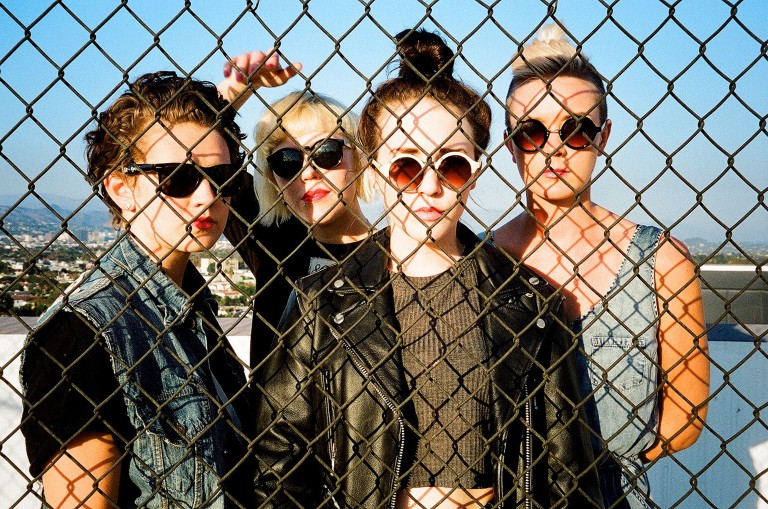 Who?
PINS are an all-female five-piece, despite the fact all their press photos only seem to have four of them in. They are Faith Vern (vocals/guitar), Anna Donigan (bass), Lois Macdonald (guitar), Sophie Galpin (drums) & Kyoko Swann (synths/guitar)

What?
Ironically it’s rather hard to pin down PINS sound; a sort of psych-tinged, gothic pop-band perhaps. The drumming, courtesy of Sophie is a constant delight, whether she’s pounding out a simple Spectorish-60’s pop rhythm, or coating the outro to Got It Bad in stunningly complex drum fills. The guitar and bass work is flexible and impressive going from rapid and jangling to rich, meandering psychedelic swirls, and the singing is spectacular, superb harmonies, and snarling moments of real anger, Alisson Mosshart springs to mind as the obvious comparison.

Where?
PINS are from Manchester. Don’t tell Birmingham, but if you take the population of Greater Manchester as a whole then it’s the second biggest urban area in the United Kingdom and musically, few could argue that it isn’t the countries second city. Home to the busiest indoor arena in the world, one of the country’s finest modern concert halls, The Bridgewater Hall and a whole host of smaller independent venues, it’s something of a gem really, in fact it’s almost as good as the average Mancunian thinks it is!

When?
PINS formed back in 2011, when Faith decided she wanted to form an all-girl group rather than be stuck as the token female singer in a largely male band. They were quickly snapped up by Bella Union and released their debut EP LuvU4Lyf back in 2012, followed by their debut full length album Girls Like Us in 2013. Following tours with the likes of Warpaint, Sleater Kinney and The Fall, the band are set to release their second album Wild Nights again via Bella Union on June 8th.

Why?
For starters they’ve written arguably the single of the year! Young Girls is a joyous slab of sunshine-psychedelia. there’s shades of The Beta Band or even Flaming Lips in their propulsive repetitive guitars, whilst lyrically it’s a pro-promiscuity, anti-waiting around for perfection anthem, Faith asking, “are you waiting for fantasy? Holding to it desperately? Wouldn’t it be fun, to kiss everyone?” The band let their poppy side come forth and it’s a brilliant thing!

Elsewhere, Baby Bhangs is reminiscent of Savages with aggressive distorted guitars, gun-shot drums and lyrics that rapidly fall from Faith’s brain to the listeners ear, it’s thrillingly energetic. Got It Bad is the sound of The Ronettes jamming with Amazing Grace era Spirtualized and Too Little Too Late showcases a similarly dark and dirgy take on rock’n’roll, the Duke Spirit showed on their early albums, it has one of the best lyrical put downs of the year, “your voice is just a noise” as well as an incredible video, a slow motion mass of glitter, paint explosions and swearing,

House Of Love is a gothic, bassy rumble painting the band as people who lurk in the shadowy depth of the night, pleading with a lover to come back, with a bored throw away line, “c’mon c’mon you’ve seen it all before.” Whilst on the excellent If Only they show a rare moment of weakness, in many ways it’s a classic 1960’s dance tune, however in the style of Frankie Rose, the sugary vocal harmonies are in contrast to the darker lyrical content with lines like, “this ache is my own and I won’t let it go” and latterly the rather crushing, “I tell myself I am okay but honestly I don’t believe me”; it’s a track every bit as beautiful as it is painful.

Why Not?
If we’re being ultra-critical, which we guess is our job, then Wild Nights is perhaps a little longer than it needs to be, in fact you quite easily chop the last two tracks off and finish on If Only, as neither Molly or Everyone Says add much to proceedings. Victims of their own ambition perhaps, that’s arguably no bad thing.

Wild Nights is out June 8th via Bella Union. PINS play Rough Trade in London June 8th, before heading off on a US tour throughout June, they tour the UK in September.