It sounds really arrogant, but my music’s my favourite music ever. I prefer it to anyone else’s.
Richard D.James

In describing their, ” long-awaited, hotly-anticipated, ground-breaking debut album[….]world famous Bristol-based indie pop three-piece Grubs” show a hard to believe lack of modesty. Hard to believe in the sense that this sounds like the opposite of a humblebrag; a phrase that’s designed to say hahaha of course we’re not ground-breaking or world famous, so we’re saying we are, it’s an ironic faux arrogance.

Of course, in this history of music there’s plenty of musicians who were neither humble nor modest. Take Stephen Patrick Morrissey for instance. With Morrissey it’s less a question of finding arrogant moments, it’s a matter of where you start; on his own desirability, “I think I must be, absolutely, a total sex object. In every sense of the word”; on the ageing process “age shouldn’t affect you. You’re either marvellous or you’re boring, regardless of your age”; and even on his own sanity, “I just feel that when all is said and done, I am not insane”. In many ways Morrissey is probably the model of the arrogant musician that so many others have come from; would Liam Gallagher, Richard Ashcroft or Ian Brown be the same infuriatingly smug characters without him?

Kanye West however seems to have an arrogance entirely of his own fashioning. Perhaps even Morrissey would have thought twice about a quote like, “I am the number one human being in music. That means any person that’s living or breathing is number two.” Whilst Morrissey’s arrogance seemed to always be slightly tongue in cheek, Kanye’s is often less amusing, his determination to be the centre of attention, see Beck and Taylor Swift for details, and comments like, “I have to dress Kim everyday so she doesn’t embarrass me” betray a nastier side to his megalomania, an old fashioned sexist, who cannot accept or even acknowledge the opinions of others who are not Kanye West.

The finest musicians have arguably always been arrogant. It goes back beyond John Lennon declaring that The Beatles were bigger than Jesus, back beyond Jerry Lee Lewis addressing the crowd at The Grand Old Opry with, “let me tell ya somethin’ about Jerry Lee Lewis, ladies and gentlemen; I am a rock ‘n’ rollin’, country-and-western, rhythm ‘n’ blues-singin’ mothafucker.” Probably even back before Beethoven discussing his legacy with a Prince, “Prince, what you are, you are by the accident of birth; what I am, I am of myself. There are and there will be thousands of princes. There is only one Beethoven”. Genius and arrogance perhaps always go hand in hand, and if not, it’s certainly the template for the archetypical modern rockstar’s public persona. 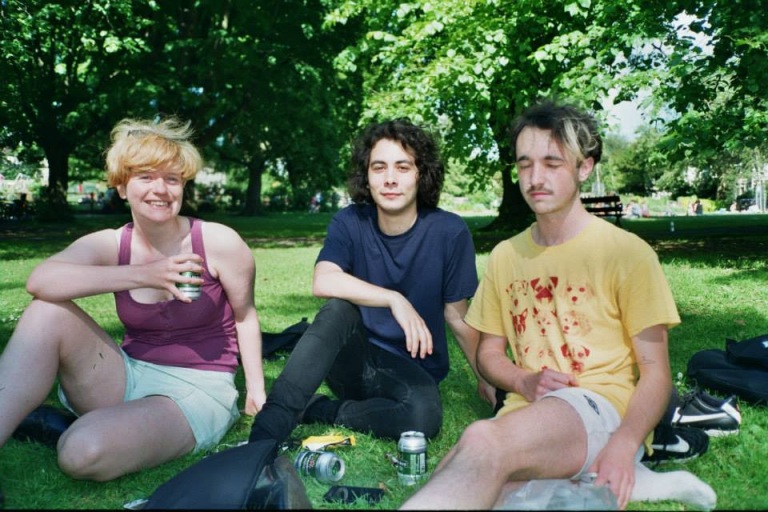 Who?
Grubs are guitar playing singer Roxy Brennan from Two White Cranes, singing guitarist Owen Williams from Joanna Gruesome and drumming drummer Jake May from the magical world of music promotion, who does the important promotional stuff for bands such as Grubs, Trust Fund and Nudes.

What?
The basic set up here is simple rhythmic drumming underlying two scuzzy guitars, one chugging and rhythmic, the other playfully dextrous and there’s some genuinely impressive riffing going on throughout. Although they shared songwriting duties, for the most part Roxy sings lead with Owen backing her up, much like they will be doing in Joanna Gruesome now Roxy had joined that band as well. Discussing the album Grubs have suggested the music is, “meant to be fun and colourful and playful and enjoyable even though some of the lyrics and songs are a bit sad.” We wouldn’t disagree; the basic idea here is of short-sharp, good time, garage punk, however there’s an additional smattering of the everyday melancholy of being a twenty-something in modern day Britain.

Where?
Grubs claim to be from Bristol, despite the fact they live as far apart as Plymouth and Cardiff; we guess Bristol might be somewhere in the middle. We’ve spoken about Bristol and Cardiff quite a lot, so how about some love for Plymouth? Plymouth is home to the ninth biggest university in the United Kingdom, the largest operational naval base in Western Europe and the British Firework Championship. Famous Plymothians, or Janners as they’re known, include Tom Daley, George from Gilbert & George and Captain Robert Falcon Scott. Well known musicians from Plymouth include, well nobody really, Seth Lakeman, Ben Howard and Beth Gibbons were all born quite nearby, so maybe they went to Plymouth once to go to the shops?

When?
When did Grubs form? A very good question, and one we don’t know the answer to. They released their debut, double A-side single Dec 15/Gym Shame via Aloe Music (US) and Cool Your Jets (UK/EU) back in July last year. They’re now following that up with their debut album, It Must Be Grubs, a joint release between Tuff Enuff Records and Reeks Of Effort.

Why?
With eleven songs and a running time of under twenty minutes, Grubs are not a band who are hanging about. The album races by, many of the songs little more than a couple of sections, or else a lot of ideas packed into a short amount of time.

The album’s first single, Windwaker, presumably named after the Zelda game, is the album at it’s poppiest and jauntiest. Largely based around a singular guitar riff, that’s both very fast and fairly complex- the sign of a guitar player who makes difficult parts looks ludicrously simple. The opening track, What Cost, has way too many ideas for a song that’s well under two minutes in length, but is delightfully coherent, the contrasting vocal melodies and tones working beautifully.

Lyrically, It Must Be Grubs is a splendid mix of the mundane and the emotive; there’s multiple references to swimming, to fading joints and tender tendons, but also to all the usual insecurities and heartache at the heart of so much great pop music. The excellent Work In Progress, with a guitar riff that’s surely lifted straight from an early Libertines recording, finds Roxy as the titular work in progress, “I focus on myself, swimming everyday is so good for my health” but still finds her inevitably comparing herself to others and by the end she’s screaming out the lyric, “I am a work in progress, I am progressing slowly, SHE IS A PERFECT PERSON, SHE, SHE!”

Both musically and lyrically Grubs are probably closer to the downbeat, bedroom pop of Trust Fund than it is to either Two White Cranes or Joanna Gruesome; however what always shines about the current Bristol-DIY scene, is the array of personalities; the feeling that they are true to themselves, that there’s a silliness sure, but there’s also an emotive weight. They remind us that life can be at the same time hard and heartbreaking, but silly and enjoyable, and that’s exactly what Grubs sound like.

Why Not?
Didn’t they say somewhere this album was going to be groundbreaking? It’s anything but, and at times the music production purists might argue that playing the odd bum note is reason enough to do another take, but you know what, who really cares? It’s just a very enjoyable, very short slice of having a very good time indeed, and who doesn’t want that from time to time?

It Must Be Grubs is out September 11th via Reeks Of Effort and Tuff Enuff Records. Grubs’ album launch is at The Grain Barge in Bristol, also on the 11th of September, with support from The Spook School and Alimony Hustle.