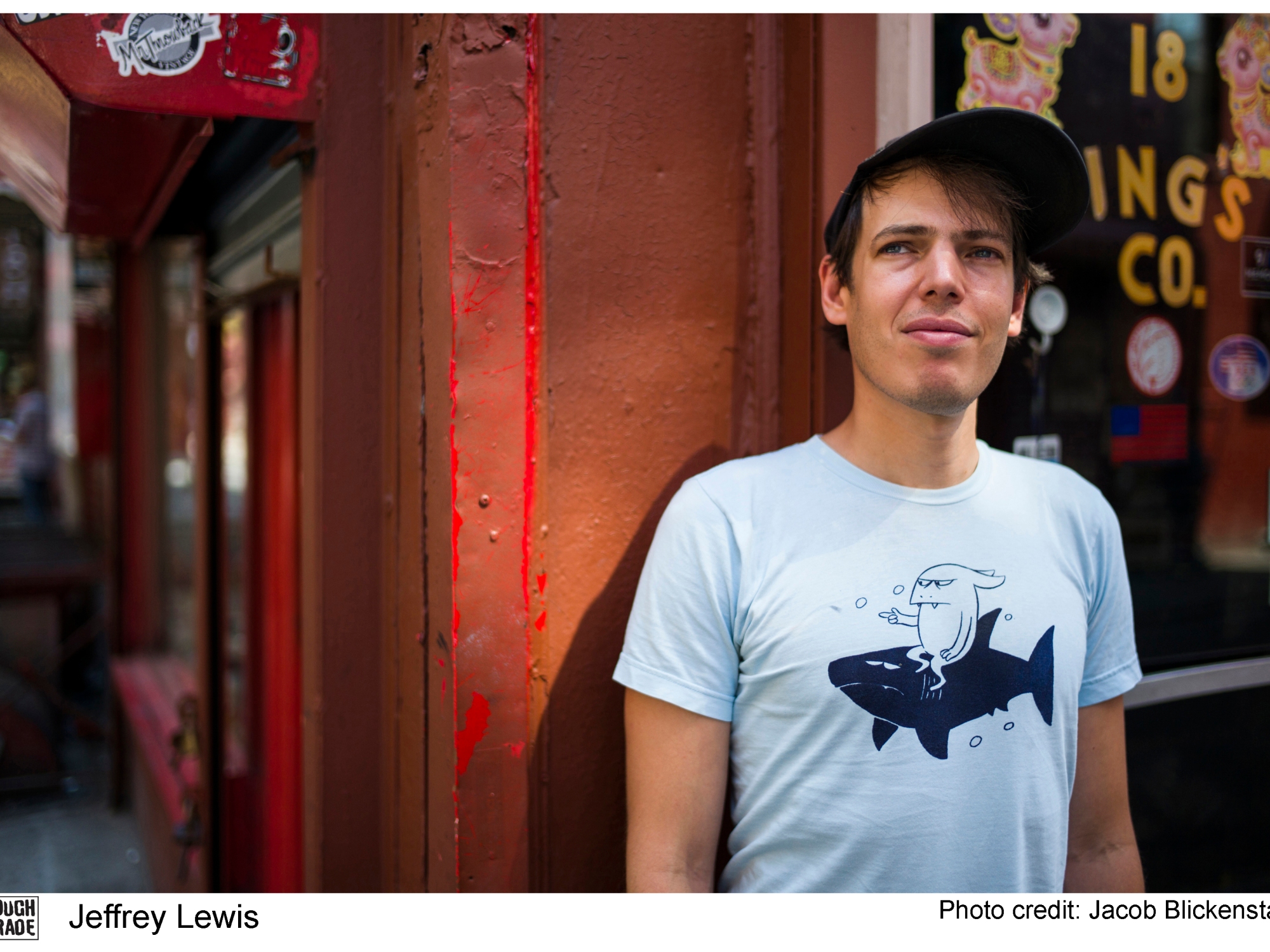 On the track Avenue A, Shanghai, Hollywood from the new Jeffrey Lewis & Los Bolts record, they make a reference to journalists still asking what is anti-folk, which triggered an idea for an article in our heads, how about we take a look at what anti-folk is…we’re nothing if not open to suggestions.

The genre, or perhaps more accurately, scene, started in the 1980’s in New York, it came about as a reaction to the prevalence and snobbery of the Greenwich Village folk scene. It was a scene that took exception to the seriousness and earnest styling of the folk scene that had so famously sprung up thirty, or even forty years earlier. The acts that originated anti-folk were linked not so much by what they were, but by what they weren’t, they loathed the dourness that folk had become in the 1960’s with harsh, uncreative rules and po-faced disapproval of anything that didn’t fit into their idea of folk. The other issue that bonded the acts together into forming their own movement was a more practical problem, they couldn’t find a gig anywhere else, so in the punk spirit, they did it themselves.

The original pioneers, Paleface, Beck, Daniel Johnston and many more bonded over a shared feeling that music didn’t need to be so serious, that more than anything it needed to be creative, perhaps even fun? One of the scene’s biggest supporters, and a performer in his own right, Jon Berger, summed it up rather beautifully as the, “kid brother to the CBGB scene”, laced as it was with the feeling that there were no rules; but unlike it’s big brother punk rock, anti-folk was playful and free of the clichés of rock and punk.

Anti-folk was a movement that said you can play acoustic guitar and spin tales, but you can do it with a joke or with anger, you can make serious points but you don’t have to be entirely versed in the history of the acoustic guitar. Whether it was actually a genre, or just a collection of like-minded individuals, is open to debate, but thankfully whatever it was it existed, and we got The Moldy Peaches, Diane Cluck and Regina Spektor out of it; the world would unquestionably be a less joyful place without it.

As a rule, we’re not big fans of comedy songs. The Bill Bailey’s, Tim Minchin’s and alike, they can certainly be very funny, and they’re likeable as comedy, but in terms of music, well we’re not going to sit down and listen to an album of them. Jeffrey Lewis is very funny indeed; the closing track of Manhattan, his seventh studio album and first since 2011, finds him re-imagining Edgar Allan Poe’s poem The Raven from the point of view of an old Jewish-man being visited regularly by a Pigeon, it’s absolute comic genius. However, what lifts Jeffrey Lewis from being a comedian playing music, to a musician who’s playing at comedy is the sincerity of his song-writing. Whilst comedians use songs as a vehicle for parody and laughs, their first mission is always to get a laugh, whilst with Jeffrey the song seems to always come first, and the comedy, well that’s just a natural follow on.

The reason we’ve started by talking about the comedy aspect of Jeffrey Lewis’ work is that in many people’s eyes, that seems to be the key to Jeffrey Lewis. Everyone remembers tracks like The Last Time I Did Acid I Went Insane and If You Shoot The Head You Kill The Ghoul, but more often overlooked in his work is his ability to be utterly, heartbreakingly beautiful. The Chelsea Hotel Oral Sex Song, from his debut album which somehow came out 14 years ago, is a song about anxiety, a lack of confidence, of finding hope in the loneliness of existence where, “someone somewhere might be singing songs about you.” Williamsburg Will Oldham Horror, is part a day-dream of a monstrous and dangerous Will Oldham abusing Jeffrey on a train, but ultimately it’s a song about Jeffrey’s insecurities as a song-writer, about him questioning his place in a musical world that already contains so much stunning music. He is, to our minds, an almost unrivalled lyrical genius, don’t believe us? Jarvis Cocker declared him, “the best lyricist working in the US today” and picked him out to support Pulp at Radio City Music Hall.

It’s been four years since his last effort, A Turn In A Dream Song, and he of course, as is seemingly traditional for him now, has a new backing band. This time he’s joined by Los Bolts, featuring some regular collaborators in drummer Heather Wagner and Hurray For The Riff Raff bass-player Caitlin Gray. On first listen to Manhattan, it was admittedly hard to pick out what had obviously changed, there were still daft humorous songs, still riotous punk rackets and still the slow quiet ones that initially make little impression, but you know will later burrow into your skull and haunt you with their poignancy. Basically if you like Jeffrey Lewis, you’ll like Manhattan.

The obvious pitch you make when naming an album after your home-town is that this is going to be your personalised tale, your musical homecoming, as ever with Jeffrey though that’s not quite how it seems. He may be a lifelong resident of Manhattan, he makes mention of it as early the excellent opening track Scowling Crackhead Ian, but like many of the best lyricist or poets he’s able to detach himself from it, he comes across more a detached observer than the albums central player. It’s a record of largely other people, always delivered from his own point of view, only rarely does he write purely about himself. Not that he’s not delightfully self-absorbed at times, on Sad Screaming Old Man, he’s awoken every night by the, “nocturnal groaning and grunts” of the old man next door, and his first reaction is, “what if I’m him and it’s true that he’s me in the future”, as the song progresses he’s visited in a Dickensian fashion by the old man, who sets the record straight.

Support Tours is his dissection of struggling to make a living in the modern musical climate, delivered with a sort of black humour as he pitches himself as, “a working class musician with no funding in my country.” Outta Town is Jeffrey at his most hapless as, to a Strokes-like guitar line and handclap beat, he explains how he can’t cope when his girlfriend goes out of town for a weekend; whether it’s washing the dishes, finishing “Friday’s crossword in The Times”, or more thoughtfully noting, “I get up, but I can’t recall what for, without you.” He comes across simultaneously pathetic and rather sweet.

As is often the case with his song-writing it’s often the tracks that seem least engaging at first that end up being the most interesting and complex. It’s a clever approach to song-writing that means with each listen you discover something new to adore about the record. Thunderstorm just washes by on the back of a simple keyboard melody, buzzing feedback and a bright, warm guitar line, the lyrics slowly sink into your head, it’s a sort of melancholy meander, he’s been doing tracks like this for years but somehow you forget they exist. It’s a dissection of depression or perhaps panic attacks, topics he’s always been very open about, but here he seems to come to terms with living with them, noting, “every mind is a mess, a mass of threads from the past”, and he seems to have realised this is something he has learnt to live with. Elsewhere, Back To Manhattan ploughs a similar hazy musical direction, a slow groove it’s pitched perfectly to the music so that when he notes, “the night drifts so gently through the sadness between us”, the music sounds almost exactly like what the lyric is describing. The song tells the tale of a relationship, set out like a journey, he gives away the ending at the start, “we went to a movie, and we’re going to break up, but I haven’t told you, because the walks forty minutes.” They walk back across the bridge seeing various people going about their daily lives, either at the start of end of their own personal journey, be it a real commute or a metaphorical life story. He sings, “some girls are magic, for some other person, he’ll know that you’re worth it, but I’m still not that person.” In the addled mind of the dumper it makes sense to him but he still knows, “by midnight you’ll hate me.” It’s rare to hear a relationship break down from this side, but it’s an emotion most people go through at some point, ultimately he concludes, “it wasn’t that easy, but it wasn’t too hard”, knowing he has done the only sensible thing, he finally completes his return to Manhattan only to find, “most of the people look boring in Manhattan.” As crushingly honest an account of a relationships demise as you’re likely to hear.

Manhattan could, in a lesser songwriters hands been an emotive love story to a home-town that meant nothing to those of us who don’t know the streets he walks, but Jeffrey’s power as a song-writer has always been to make everything relatable. We all knew a terrifying spectre of a person in our youth like Scowling Crackhead Ian, we’ve all metaphorically walked the bridge of a relationship like Back To Manhattan, and we’ve all felt helpless without someone like Outta Town. It’s simply another triumph from a song-writer, who increasingly feels like an old-friend, one who you welcome with open arms and a warm embrace, welcome back Jeffrey, you’ve worked your magic again.

Manhattan is out now via Rough Trade Records. Jeffrey Lewis tours the UK in December, click HERE for details.