Continuing our quest to introduce to the best sounds of 2016, here’s the final eight members of For The Rabbits’ Class of 2016

London-based Lebanese composer, musician, lyrical poet and singer Nadine Khouri is set to release her debut album Lost Continents in the early months of 2016. Recorded in Bristol with the somewhat legendary John Parish, Nadine has explained it is an album influenced by dream-pop, movie soundtracks and spoken word. She was kind enough to discuss the project in greater detail with us at the back end of last year, which you can read HERE.

The first snapshot of what to expect from the album came in the shape of Nadine’s most recent single, You Got A Fire. It’s a fabulous track, starting from a minimal introduction, with just Nadine and a ukulele and building to a hazy crescendo of droning beauty. The track marked Nadine out as a contemporary of Low, Sparklehorse and Mazzy Star, and she sounds more than comfortable in that company.

Few bands on this list have given us less to go on regarding their new release, but a recent photo of copies of boxes of vinyl records called Crystal Cafe, would go to suggest that 2016 should see the debut album from London’s Witching Waves. The label, the tracklisting, the release date… well your guess is as good as ours, but we’re starting our excitement early none the less.

Witching Waves are a fabulously noisy trio; all pulsing bass rumbles, ferocious, scuzz-laden guitar lines and crushing, intense drums, overlain with energetically harmonious, interwoven vocals. A well established fixture on the live scene, at the very least they’ll release a record that we can nearly guarantee will be deliriously, delightfully loud.

Witching Waves have yet to confirm either a label or a release date, although we’re guessing their new record is called Crystal Cafe!

There are few songs that you vividly remember the first time you heard them, but Too Small For Eyes, the recent single from Mothers was one of those moments. It was a stop what you’re doing, drop everything and just listen moment. The voice, belonging to front-woman Kristine Leschper, was simply jaw dropping, the musical accompaniment stunning, slowly building from the sparsest of strings to a crescendo of echoing piano chords and rich haunting strings. It is absolutely stunning!

Assuming that Too Small For Eyes wasn’t just a singular moment of brilliance, it’s safe to be very excited about Mothers upcoming debut album, When You Walk A Long Distance You Are Tired, which will see the light of day on Wichita Recordings next month. February will also see the band’s first ever live shows in London, but don’t expect it to be the last you hear of Mothers this year.

When You Walk A Long Distance You Are Tired is out February 26th via Wichita Recordings. Mothers play a pair of dates in London in February, click HERE for details.

It’s perhaps a little odd to be tipping a “new” act who’s been releasing music since the 1980’s, but as we approach 2016, there seem to be some renewed momentum to the music of Pete Astor. Pete initially found fame as a member of The Loft and The Weather Prophets who released music on the legendary Creation Records, and has continued to release both as a solo artist and in various bands ever since; he’s also one of the highest qualified songwriters you’ll come across, holding a senior lectureship in music at the University of Westminster.

Pete’s latest solo album, Spilt Milk, is in many ways the completion of a circular journey; it is the sound of a musician returning to his routes, and sounding much stronger for the journey he has undertaken. Recorded with Veronica Falls/Ultimate Painting member James Hoare, Spilt Milk is a classic British pop record, there’s shades of The Kinks, Ian Dury, The Go-Betweens, most of all though this is just the sound of that most timeless of things, a new record by Pete Astor.

Spilt Milk is out in the UK via Fortuna Pop on January 8th,  with a US release via Slumberland following February 12th. Click HERE for all Pete’s upcoming tour dates. 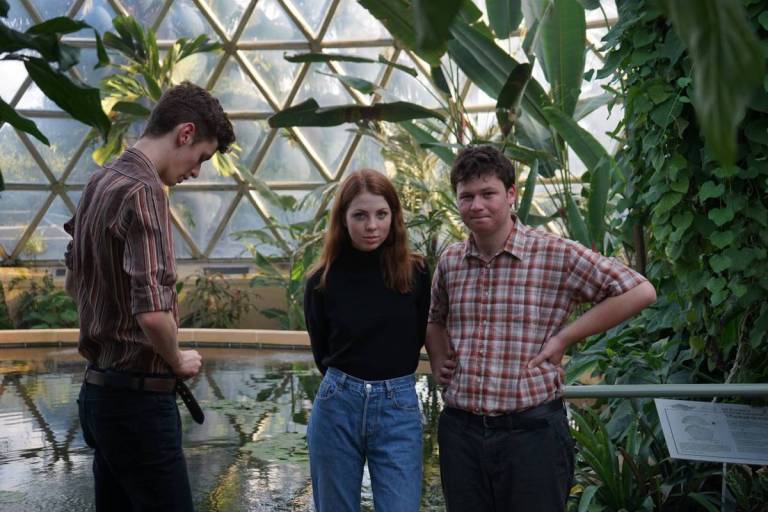 Fresh faced Brisbane trio The Goon Sax are a band who’s influences seem almost too old for their years. They may still be in their teenage years but they cite the likes of The Pastels, Galaxie 500 and Talking Heads as influences, and make the sort of music last heard being pedalled by Postcard Records at least a decade before any of these three were even born.

Whilst we’ll have to wait for their debut album, they’ve already shared two tantalising snapshots of what to expect in the shape of singles Boyfriend and Sometimes Accidentally. Boyfriend is a plea for, “a boyfriend or just anything real”, set to a fizzing-stab of drums and guitar; whilst Sometimes Accidentally is a glorious slice of downbeat jangle-pop. Music for your heartbroken inner teenager hasn’t sounded this fresh or exciting in a very long time.

Up To Anything is out in 2016 via Chapter Music.

Bruising only formed approximately a year ago, after a chance coming together in a nightclub in the bands home city, Leeds. Singer Naomi Baguley spotted Ben Lewis wearing a Perfect Pussy t-shirt, and the rest as they say is history. Naomi may now be based out of Berlin, but the band managed to continue and at the back end of 2015 they released a new AA single, recorded as all Leeds acts tend to be these days, at Suburban Home Studio’s the home of Hookworms-frontman turned production genius, MJ.

That single, Emo Friends/Honey, was a wonderful slice of what people used to call college rock, fusing energetic buzz-saw guitars with Naomi’s beautifully sweet vocal. Its release coincided with a tour with Los Campesinos and a significant step up in the bands activities. Whilst no details of the band’s debut album have thus far emerged, with a series of dates with fellow up-and-comers Diet Cig scheduled it’s already looking like a fruitful year for the latest band off the Yorkshire music production line

T-Shirt Weather are one of those bands who seem to have a great approach to music and being a band. Take three friends, immerse yourself in the music-scene in your hometown, and don’t worry too much if it doesn’t quite come out like you planned it. The trio formed in Durham, whilst members Tom and Andrew were managing the city’s premier underground venue, The Fish Tank. They set about trying to write an album that sounded like The Beatles, but as they put it, “it came out like a silly North-East Greenday and we’re running with it.”

T-Shirt Weather are set to release their second album, Pig Beach via Odd Box Records. Pig Beach is a record that follows in the footsteps of much of the recent output from Durham, such as Martha and No Ditching, making articulate, noisy pop-punk, with enough humour and good sense to not take themselves entirely seriously. Take recent single Gum, a blur of unmistakeably North-Eastern vocals, crashing drums and catchy guitar riffing, there’s even room for some gloriously unhinged punk-trumpeting. Thankfully the rest of the album is just as chaotic, triumphant and feverishly fun.

Ben Rubenstein, or Benedict Benjamin to use his latest stage name, found himself in a tricky position. His musical projects, Mariner’s Children and Peggy Sue were drifting into his past, he was working two jobs and lacking sleep, and he was going through a tricky patch in his personal life. It might not sound the most conducive of situation, but from great difficulty he managed to tap into new inspiration, the fruits of which he will share with the world this year in the shape of his first solo album, Night Songs.

Night Songs was recorded in a series of churches, bedrooms and kitchens across the South-East of England, with the help of producer Dan Blackett, best known as the drummer in Landshapes. It is a record that takes the intricate song writing you would expect from his previous folk-driven output, and gives it a rich sonic makeover; incorporating element of classic pop in the mould of Roy Orbison or The Everly Brothers, the expansive acoustics of Jeff Tweedy or Justin Vernon, and even a touch of psychedelic meandering. It’s best showcased by stunning single, Thin Skin, although it is primarily a record to immerse yourself in and slowly discover its delicate hidden charms.

Night Songs is out March 25th via Sugarcoat Records.