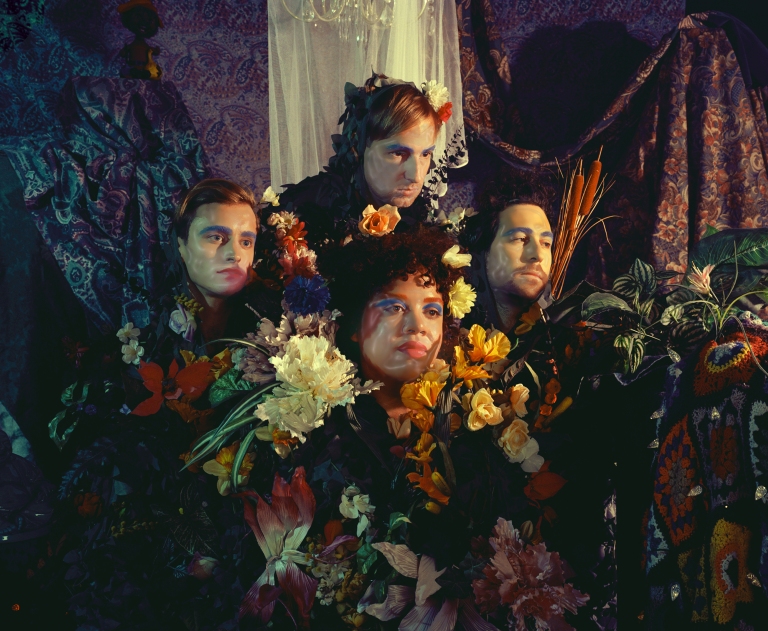 Who?
Weaves were originally a duo consisting of singer Jasmyn Burke and guitarist Morgan Waters. They’ve since expanded into a four-piece, bringing on board, drummer Spencer Cole and bassist Zach Bines.

What?
The music of Weaves is somewhat hard to pin down, as it never seems to stop shifting. Guitars drift in and out the foreground, seemingly coming back with a new sound and a new riff every few seconds, whilst the drumming seems to go from tight and rhythmic too loose and free without even pausing for breath. The whole record is underpinned by tonal and tempo shifts, giving it an uneasy lurching sensation, a bit like a very enjoyable bought of sea sickness. The star of the show is unquestionably singer Jasmyn Burke, her idiosyncratic lyrical delivery, and constantly shifting tones and melodies are disarmingly wonderful.

Where?
Weaves are based out of Canada’s most populous city Toronto. One quarter of Canada’s entire population is located within 160km’s of Toronto, which goes someway to explaining why the city has over 8000 restaurants. Toronto is a very ethnically diverse city with over 50% of residents born outside of Canada, and the largest population of Italians outside of Italy. Perhaps due to its diverse populous, Toronto has housed numerous musical scenes from goth’s in the 1980’s, soul music in the 90’s and in recent years a prominent hip-hop scene. Famous acts from the city include Rush, Alvvays and Anvil.

When?
Weaves formed back in 2013, when Jasmyn shared a series of iPhone voice memos with Morgan. The duo began recording demos in Morgan’s Chinatown apartment, before recruiting Spencer and Zach to record their debut EP, which came out on Buzz Records in summer 2014. Since that release the band have been working on their self-titled debut album which came out this month on Memphis Industries.

Why?
Well because it’s quite possibly the most intriguingly odd record we’ve heard all year. There are similarities to the DRINKS record of last year, in the boundary less musical form that Weaves have created. In a day and age when seemingly everything has been done before, Weaves remind us that is hasn’t, and that’s frankly quite thrilling.

The energy is nearly relentless, even from the opening track Tick, as a listener you’re hit with an insistent Strokes-like guitar riff, that’s frantic and just a little off-kilter. The track hints at the pressure that we all, and musicians in particular, have to achieve as much as we can while we’re young, Jasmyn noting, “sweety, I just want your biological clock, tick tock.”

Across the record Weaves don’t settle for a particular sound, but do put their own unique lurch on a number of genres. There’s the slacker rock of tracks like Shithole or Eagle, that brings to mind Pavement, but infused with the feeling that at any second the whole thing could unravel into musical catastrophe, it’s the sound of running towards a cliff and skidding to a halt just before you find yourself falling head first into the ocean. The excellent Coo-Coo tones things down merging the creativity of tUnE-yArDs with the afro-beat catchiness of Vampire Weekend, whilst closing track Stress is their ode to taking it easy, and frankly after the album that proceeds it, you may well want a lie down.

The most intriguing, and as such divisive, track on show is probably Two Oceans, the album’s centre piece, it beings with a disorientating squalling guitar and a broken yelp of a vocal, and only gets more confusing from there; at times Jasmyn seems to provide her own commentary on the lead vocal, the whole thing is slightly manic, but with every vocal trip, the music seems to lurch and collapse with her, it’s as if the whole band are in on some unexplained rhythm that they have no interest in making obvious to the listener. It creates the rather odd sensation of an entire song sounding drunk, it’s as if you’re standing stock still and the whole world is swaying around you. If you can find the secretive joys in Two Oceans, then you’re going to love Weaves, if it leaves you baffled and sad, maybe look elsewhere.

Why Not?
Not music for hangovers, even an empty stomach or a bad night’s sleep can leave the whole thing feeling a bit like being battered round the ears and punched in the gut. It kind of makes our skin crawl, but in the right mood it’s all the better for the pending musical collapse and underlying tensions held within.

Weaves’ debut album is out now via Memphis Industries. Weaves’ UK tour kicks off next week, click HERE for details.