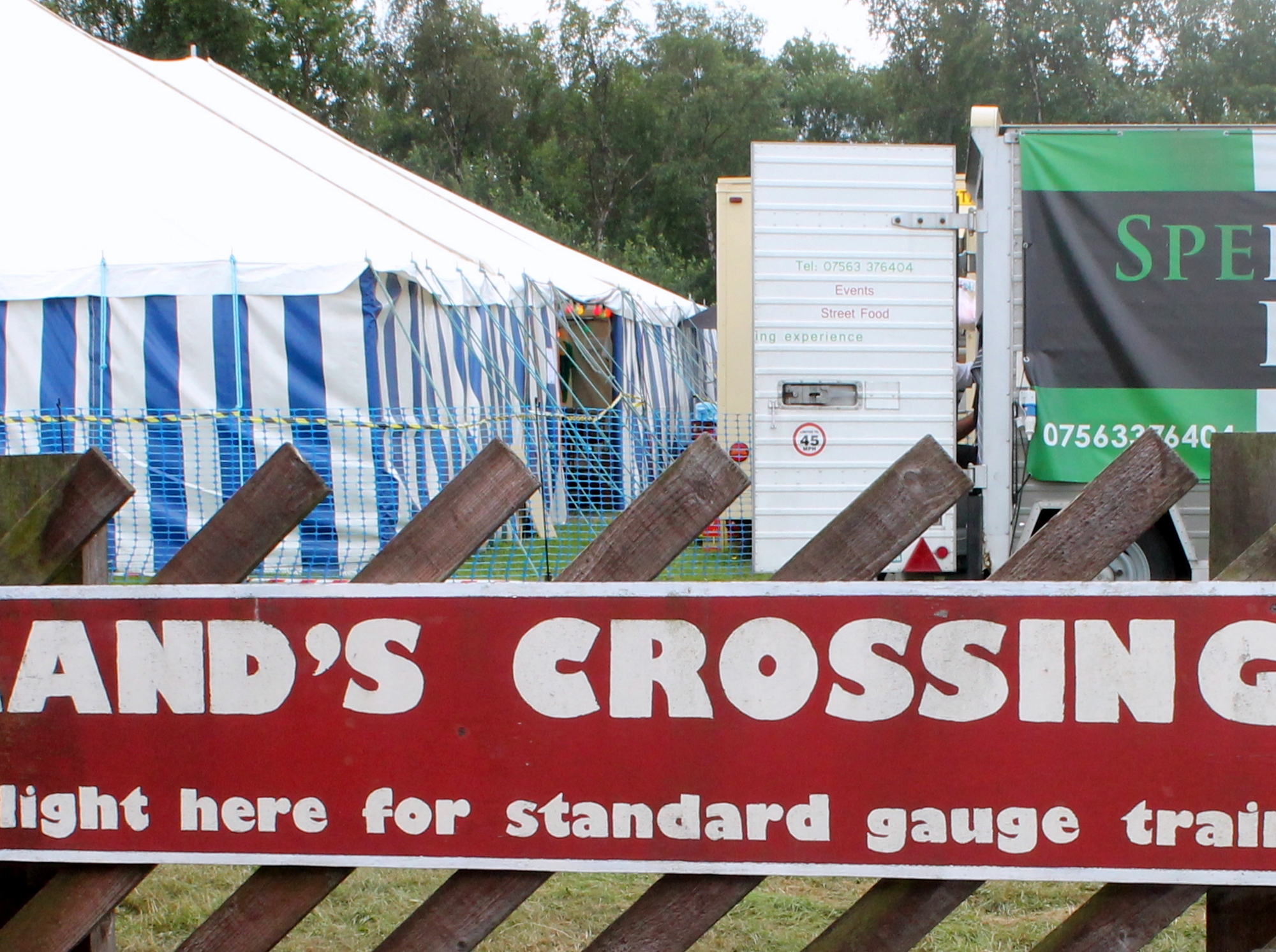 A sign of a good festival line up is the amount of times you’re tearing your hair out trying to work out how exactly you’re going to cope with the inevitable scheduling clashes they throw up. Sunday at Indietracks was headache inducing in the best possible way.

Whichever member of Team Indietracks decided that City Yelps and Witching Waves should respectively open the Indoor and Outdoor stages obviously wasn’t taking slightly groggy Sunday festival heads into account, as they’re both delightfully loud; a good way to get people rapidly back into the party mood anyway. City Yelps are the more raw of the two, snarling proto-punk with booming primal drums, rapidly strummed bass and a singular guitar sound, that’s sadly a little too quiet in the mix. The vocals are so drenched in delay it’s hard to recognise tracks, and we must admit we didn’t even notice they were covering the Sex Pistols until they told us they just had, still a noisily good time was had by all. Witching Waves approach is perhaps a touch more nuanced and pop-driven, but still deliciously scuzzy, the drums are powerful and pacey, the guitar work expert with some magical riffing. It’s only the bands third show with a new bass player, for the most part though you wouldn’t notice, and despite seeming a touch nervous at the start, it’s an excellent set.

Another fine day of surprise sets in the merchandise tent is kicked off by Odd Box Records signed Londoners, Wolf Girl. Stripped back to a three piece, of vocals, banjo and acoustic guitar, singer Becky jokes they’ve gone folk-punk, but the stripped back feeling does wonders for the inherent melodies in their songwriting and it actually suits them far better than we’d imagined.

From there we take in Seazoo whilst awaiting a pizza, so we’re not entirely sure what they looked like, but they sounded excellent. Classically Welsh in many ways they nod to the likes of Super Furry Animals and Sweet Baboo, and draw a large crowd of interested onlookers. They’re also a victim of the first of many painful clashes on this super Sunday line up, and we shoot off a little early for the start of ¡Ay,Carmela!

They may be wedged in between Seazoo and Deerful, but there’s still an impressive crowd drawn for West London trio ¡Ay,Carmela! and it’s very easy to see why. The band recently released their debut album, Working Week, a set of anthems for inventive millennials who have to balance creativity and day jobs. They deal in emotive indie-pop, the sort of music Allo Darlin’ would release if their summer days were replaced by the impending melancholy of Autumn. Crying In Public and Don’t Congratulate Me (For My Mediocrity) may get toes tapping, but when they take things a little darker on the North African tinged Birds, and the majestic gloom of Brother they reveal a depth beyond many of their contemporaries. Add in some truly excellent musicianship and they’re a fascinating prospect; one of the most promising discoveries of the weekend.

We make a quick dash to try and take in the electro-pop stylings of Deerful, but as it is three deep just to look in through the window; we can only really report that it sounded delightful through a brick wall (or whatever the church is actually made of), and went down very well indeed with those who could fit inside.

We first stumbled across North London trio Girl Ray supporting Tuff Love at a relatively recent London show, the audience that night was largely the bands parents, but thankfully since then their rise has been mightily impressive. A couple of well received singles have come since then, as has a Marc Riley session and a number of plays on daytime 6music, so it’s slightly surprising there’s so few people in when they start playing, thankfully the crowd fills out a little a few songs in, just in time to see the band hit their stride. Girl Ray deal in off-kilter pop songs in the mould of H.Hawkline or Euros Childs, laced with spectacular three-part harmonies, and impressive tempo shifts. They may not have shared much material with the world yet, but the quality doesn’t seem to drop, so hopefully we’ll be hearing a lot more of them soon.

Next up are local girls done good, in the shape of Derbyshire’s own instrumental-baroque-pop trio Haiku Salut. They first appeared on this stage back in 2008 as members of messy indie-pop troublemakers The Deirdres, but the contrast between the two acts couldn’t be more pronounced. What’s most impressive about the bands live performance is the sheer amount of noises they manage to make; it’s like watching musical octopi, all three members willing to try their hand at a huge variety of instruments, sometimes two or three at a time. Whether it’s trumpets, accordions, percussion, laptops, or what appears to be some sort of magical wooden box, you put it front of a member of Haiku Salut and they’ll play it. They run through a selection of pieces from their two critically acclaimed albums, and generally completely wow the crowd, whilst it’s hard to imagine a mainstream break through is on the cards, a successful career on the fringes of the alternative music world surely beckons for these ludicrously talented musicians who seem to just keep getting better.

The weekend’s most painful clash between Trust Fund and Haiku Salut means we only catch the last few numbers of Ellis Jones and his rotating cast of band members, who draw a huge crowd to the indoor stage. They’re an intriguing contradiction of a live act, when the music flows they seem confident, supremely tight and professional, yet between songs they seem to not even be sure what they’re playing, at times it takes the best part of a minute or so just to decide what’s going to happen next, and it’s rather awkward viewing. Still when they’ve got tracks as heavy hitting as Football, and the stunning closing track Cut Me Out it’s hard not to fall for their charms. The latter is the track of the weekend, a sheer splurge of raw human emotion on a stage; it’s a magnificent reminder of why Ellis is currently one of the most intriguing songwriters making music on these shores.

There’s probably nobody who’s performed more times at Indietracks over the years than Darren Hayman, so it’s only fitting that he should be here for the anniversary edition. Joined by the current incarnation of The Secondary Modern, including, apparently for the last time in a while, Allo Darlin’s Bill Botting on bass. Despite suffering from an at times painfully hoarse voice we’re treated to something of a greatest hits set from Darren. The band run through some of his hugely popular Hefner numbers, including a rapturously received Hymn For The Cigarettes; but as ever it’s peppered with much of Darren’s more eclectic projects, be that recreating William Morris’ Chants For Socialists or honouring the UK’s Thankful Villages. A born storyteller, Darren manages to make what on paper sounds dense and challenging, genuinely fun, as he puts it about the Thankful Villages project, “I’m not going to write 53 songs about WWI, I’m not an idiot.” He’s certainly not, he’s a fascinating songwriter, raconteur and advertising agent for Sanderson’s Throat Specific Mixture, and the world would be a better place with more Darren Hayman’s in it.

Closing musical proceedings for the weekend are apparently legendary indie-pop heroes, The Aislers Set. This is where we make the slightly embarrassing confession that we have not got a clue who The Aislers Set are. They sound perfectly enjoyable, and draw a large crowd for the traditionally slightly thinned out Sunday evening set, those who know them love them, and you can’t argue with that. 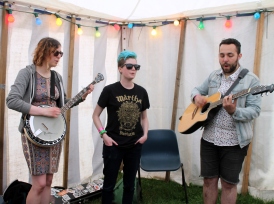 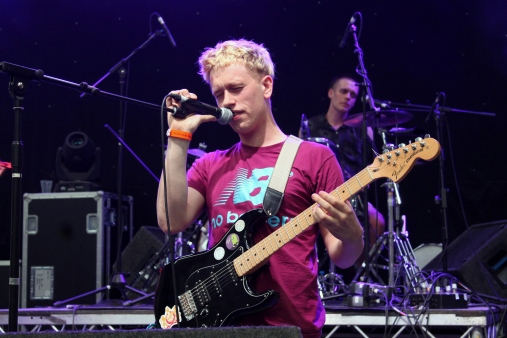 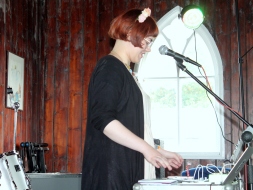 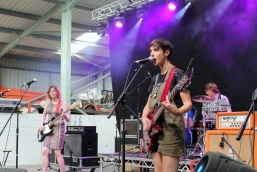 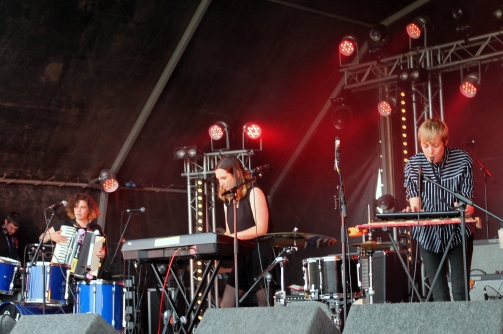 From there it’s a matter of fond farewells, attempting to match last year’s drinking the bar dry, and dancing across the increasingly dust bowl like site. Ten years of Indietracks celebrated in perfect fashion, now here’s to at least another ten, the world would be a much bleaker place without it.