A greatly under-rated quality in a festival site is the choice of bedrock. It turns out that having a fast draining rock such as the chalk outcrops of the Dorset/Wiltshire border can be crucial in coping with the almost inevitable down pours. While Festival No.6 became a mudbath, as it entered the weekend, End Of The Road managed to survive a series of full blown downpours with minimal mud, and much rejoicing.

After an exclusive stream of the new Wilco album, our live music for the day started with hotly tipped Australian songwriter, Julia Jacklin. Despite losing a bonus point for telling the crowd how beautiful the festival they’d just come from was, it’s a confident and charming set. While the biggest reaction is for recent single, Swimming Pool, the stand out moment is the closing track, losing her backing band, bar some lovely harmonies from her drummer, the version of the title from her upcoming album, Don’t Let The Kids Win is spectacularly good. Half an hour or so with Julia is a rather excellent way to start your day.

Leaving the Tipi tent behind, we venture out into the rather murky daylight and make our way to the alluring site of The Garden Stage, for Welsh wonder Meilyr Jones. Whilst Meilyr’s presence is greeted with the opening of the heavens, it doesn’t seem to dampen his spirits too much. If anything he seems additionally motivated to liven the crowd’s days, and he’s become a stunningly good front man. Accompanied by his regular cast of multi-instrumentalists they run through the best of his recent debut album, 2013. What’s most impressive is how they effortlessly drift from the rousing glam-rock of Strange Emotional, to orchestral beauties like Olivia. Eclectic, intriguing and one of the stand-out sets from a weekend full of them.

Sadly as Meilyr’s goes from strength to strength, so does the rain, and like much of the audience as the set comes to close we make a dash for shelter, and miss a much anticipated set from Jeffrey Lewis. The mass rush for cover also results in the Tipi Tent being jam-packed for Lucy Dacus and Frankie Cosmos, to the point we can’t actually get inside it. We do manage to squeeze in for the polished pop, and spectacularly glittery, gold cape of Basia Bulat, who delivers a polished set, despite a good proportion of the crowd arguably being more interested in discussing the weather than listening to her songs.

If it’s a shot of energy that a festival needs, there’s arguably no better band in Britain to provide it than Durham-punks, Martha. They win over a large crowd with a set of vibrant enthusiasm, and big pop hooks. They might not seem the most obvious fit for End Of The Road, but lifting tracks from both their critically acclaimed latest effort, Blisters In The Pit Of My Heart, and debut album Courting Strong, their winning blend of heartbreaking lyrics and unforgettable choruses goes down a storm.

With a murky day giving way to a soggy night, we risk heading out into the darkness for a set from M. Ward, which is solid, if unspectacular. His new material sounds like some of his strongest yet, and while not the most captivating performer, his voice remains as smoothly enticing as ever.

Battling with the somewhat more poised presence of Bat For Lashes, our pick for Saturday’s headline slot, for the second time this weekend no less, is Ezra Furman. While an acoustic set the day before has reminded us how tender Ezra can be, with regular backing band The Boyfriends, we’re reminded just how chaotically brilliant they can be. It’s part punk, part glam, part old fashioned rock’n’roll, and all absolutely brilliant. Restless Year becomes a rhythmic shriek, My Zero is a massed sing along, and I Wanna Destroy Myself is just a little too close to coming true for comfort. They finish on a cover of Jackie Wilson’s (Your Love Keeps Lifting Me) Higher & Higher, but by that point we’re making a dash for a late night set in the Tipi Tent, that’s been a year in the making.

Brian Christinzio, aka BC Camplight, was meant to be here a year earlier. Following the release of his superb return from the brink album, How To Die In The North, a freak leg injury resulted in Brian failing to meet his work permit requirements and being kicked out of the country; without wanting to get too political, the home office clearly don’t have much musical taste. Thankfully Brian is now able to resume his career and life in the UK, and there’s a celebratory nature to his set. Dressed in a large hat and dark glasses, we honestly have no idea what Brian looks like, but he sounds fabulous, and is thoroughly entertaining company. There’s a couple of new tracks, which bode well for where his music is going next, and it’s arguably the most triumphant (and booziest) set of the weekend.

Elsewhere on the site Wild Beasts are playing a surprise set, John Hopkins is DJing, and Bat For Lashes is turning the Disco Ship into a wedding reception; Saturday’s entertainment once again shows what an eclectic, wonderful and joyous weekend End Of The Road remains.

We must admit we didn’t see it coming, but Sunday morning at the festival is not marked here by a trip to church, or even a Match Of The Day re-run; but at Larmer Tree Gardens, it’s the morning of drones. We start with Be, the soundtrack to Wolfgan Buttress’ award winning installation piece The Hive. The art is based around the plight of Bees, and uses a live feed of a beehive, over which the musicians improvise in the key of C. A high-concept way to start the morning, it does wash over us without leaving a huge impression but it’s a very pleasant sound none the less. They’re followed by London’s finest kraut-pop band, The Leaf Library. Playing tracks largely lifted from their excellent recent album, Daylight Versions, they’re something of a revelation, we knew they were good before, but with a beefed up speaker system, and a slot on the main stage, they grow into their surroundings and deliver a truly excellent set, and a perfect start to the day’s proceedings.

Over on The Garden Stage, Imarhan bring a taste of Northern Mali to Dorset. Their infectious rhythms and distorted electric guitars bring the crowd to their feet, even if the bands sense of rhythm isn’t quite matched by their crowds dance moves. They’re followed by the considerably less exotic, but no less enjoyable, Bill Ryder-Jones. A slightly awkward presence he may be, but his music remains heartbreaking, honest, and spectacularly gloomy.

Among a very specific crowd of largely middle-aged Uncut readers, Kevin Morby’s album Singing Saw has been one of the most well received records of the year. End Of The Road marked the end of a huge touring period for Kevin and his band, and they’re unsurprisingly slick, and produce an excellent rendition of many of the tracks from that album, plus some of his previous output. Whilst slightly missing some of the gorgeous details that make the record so beautiful, the trumpet on I Have Been To The Mountain is particularly sadly absent, it’s still a wonderful set, and well received by the large crowd who have gathered.

The first UK show in five years from Broken Social Scene was always going to be quite special, and that they draw one of the weekend’s biggest crowds is no surprise. What is slightly more surprising is just how great they sound. It’s easy to forget just how brilliant their four albums to date were, whilst their live show, featuring a revolving cast of what seems an almost endless number of brilliant musicians is a really spectacular thing. Defacto band leader Kevin Drew is a magnetic presence, and his heartfelt shtick about sticking together and pulling through difficult times gives him the air of an Indie Prophet comes to guide us to a brighter future – it’s a fabulous return, and let’s hope we don’t have to wait anything like as long to hear from them again. 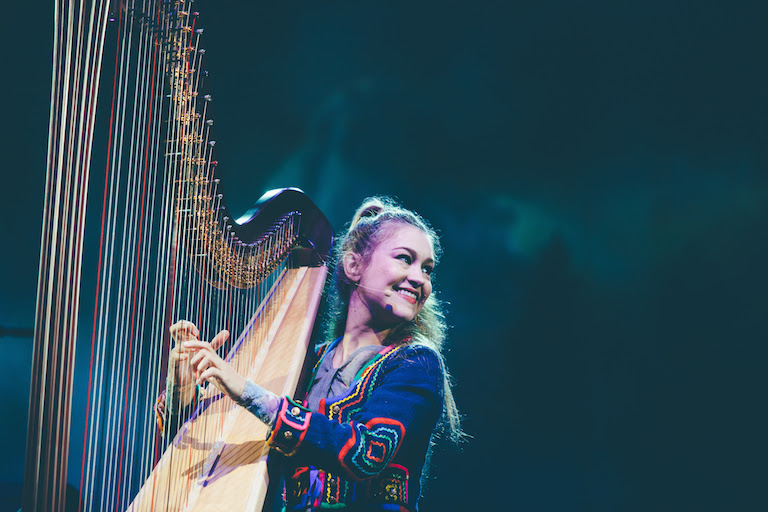 Joanna Newsom is afforded the slightly odd honour of being the only act performing on the Sunday evening, whilst we don’t quite understand the decision, fears that this might result in a half interested chatty audience are unfounded and for the most part her set is received in hushed rapture. While her voice remains divisive (we’re firmly on the ‘isn’t it beautiful’ side of the argument) there’s no doubting the sheer quality of either her playing or her bands. Harp strings are plucked, pianos tinkled and recorders tootled in perfect harmony, as Joanna weaves her intricate lyrical tales. A career spanning set, there’s plentiful highlights, but nothing is as good as Time, As A Symptom, the closing track to recent albums Divers, on record it’s dense and almost impenetrable, but here stripped back it’s absolutely heart-breaking, and as ever Joanna leaves us a little bit awestruck. In a weekend full of magical sets, there’s arguably none more impressive than this – a fantastic finish, to what remains the United Kingdom’s finest festival.

All photos courtesy of End Of The Road unless credited.