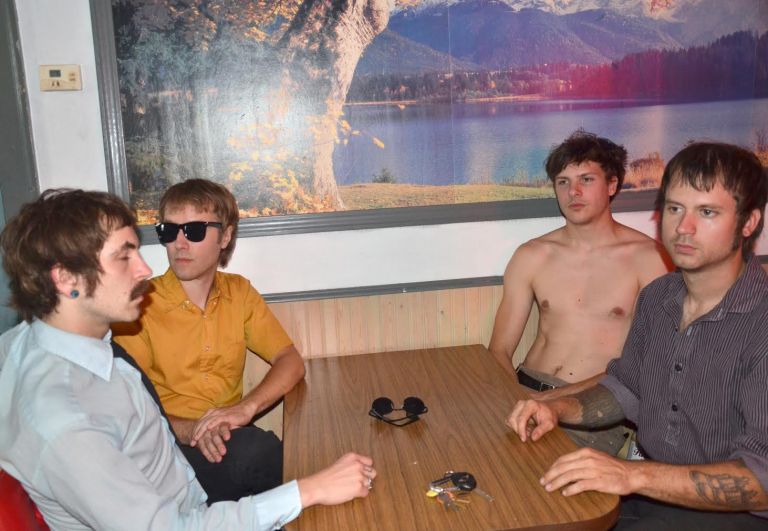 What?
For the most part you’d file Real Numbers alongside fellow US-jangle-pop heroes Literature, Expert Alterations and The Pains Of Being Pure At Heart. Wordless Wonder marks something of a departure for Real Numbers though; while previously the band largely recorded live, here they’ve tried to achieve a more rounded sound. The guitars in particular come heavily layered, often double tracking rhythm guitars behind the jangling lead lines; their press release see’s Eli wax-lyrical about the joys of a 12-string acoustic that appears sporadically throughout, while they even make gentle forays into the worlds of keyboards adding some additional sonic textures.

Where?
Real Numbers are from Minneapolis, the largest city in the state of Minnesota. Minneapolis is home to around 3.5million residents, making it the 46th largest city in the United States. Located on both sides of the Mississippi river, Minneapolis is a famously wet place, and even takes its name from mni, a Dakota Sioux word for water, and polis, the Greek word for city. Minneapolis has a rich musical history, most famously as the birthplace of Prince, other musical acts from the area include The Replacements, Babes In Toyland, and those famous secret smilers, Semisonic.

When?
Real Numbers have been putting music out into the world since 2008’s single, Radio World. They’ve since released a pair of 12″ EPs on Three Dimensional Records, a single on Florida’s Dying, and appeared on cassettes from Forged Artifacts and No Problem. The band will finally release their long awaited debut long player this week on Slumberland Records.

Why?
There’s something refreshingly old fashioned about Real Numbers, they invite the listener back to indie’s 1980’s hay-day, when achieving anything with a sweet melody and a simplistic, clattering drum beat seemed possible. These are for the most part bright-breezy pop songs, that are nowhere as upbeat as they might first appear.

Despite being from Minnesota, there’s something oddly British sounding about Real Numbers, whether it’s Wordless Wonder’s take on the melancholic melodies of Teenage Fanclub, or The Undertones like Just So Far Away, which is so energetic it manages to sound even shorter than it’s one minute fifty seconds run time. Not that they don’t dip into the annals of American musical history, Sister’s Serving Tray sounds suspiciously like Mrs Robinson, while in some of the multi-tracked rhythms there’s a touch of The Byrds, if they’d grown up in the late 1970’s

As if often the case on these rapid fire collections, Real Numbers are arguably at their best when they stop short of full throttle and dial things down a little. Falling Out, which closes the albums first half, is absolutely brilliant. Pairing a strutting, early beat-group riff that The Shadows would be proud of with a wheezing harmonium might not sound like a winning combination but it works beautifully. Plus the track is apparently about falling out of a car and not knowing how to tell your parents about it, which makes a pleasant change from the pop template of broken hearts and sexual innuendo. The other highlight is the albums closing track, This Happy Sadness, a quietly melancholic number that brings a perfectly chosen, very cheap sounding 1980’s keyboard into the mix, which works perfectly.

Why Not?
Real Numbers sound is arguably not the most original thing you’ll ever here, but fans of articulate, melodic, jangling indie-pop will find an awful lot to admire.

Wordless Wonder is out October 14th via Slumberland Records.