South-London might not exactly be a hot-bed of new country-noir sounds, but one band doing their best to change that is Americana-quartet, Cat Meat. The band are set to release their third album, Trembling Tongues Take Magpie Bait, on March 3rd, and ahead of that we’re delighted to share their new single, Caught By The Ricochet. 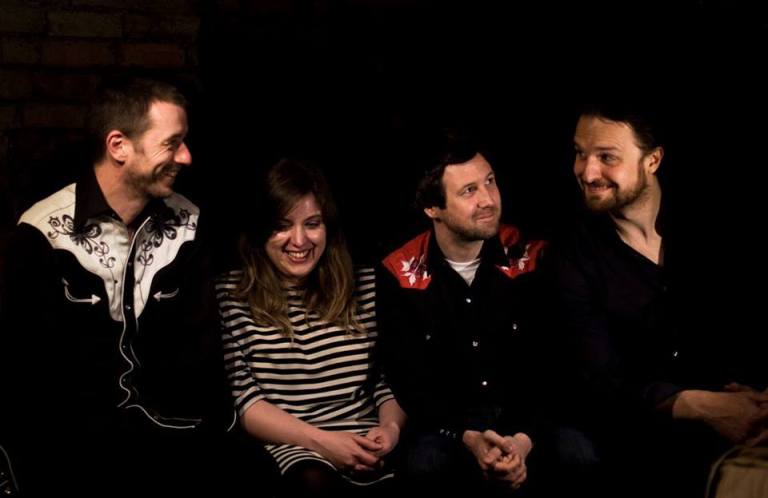 Led by a vocal that brings to mind Mark Lanegan or Duke Garwood, Caught By The Ricochet is a slice of deeply atmospheric, doomy-Americana. The track is musically sublime, from the Neil Young like meandering guitar line, through to chiming keys, and the sort of complex drum-patterns that Philip Selway has always used to propel Radiohead’s music with. As well as sharing their new track, Cat Meat also answered some of our questions, check out the Q&A below, as the band discuss making their new music, how parenthood has affected their sound and the story behind their album’s intriguing title.

FTR: We’re premiering your new single, Caught By The Ricochet – what can you tell us about the song?

Usually I’m completely incapable of writing a song before midnight, but this one sprang straight out of my head as soon as I woke up one morning. I think it arrived during the kind of period of discombobulation that only comes when you first become a parent. It’s a love song really, and came off the back of a particularly intense and rather trippy dream I’d had, beginning with a bit of time travel back to when my wife and I first met in our attic room in Cardiff and culminating in me getting swept up by a murmuration of starlings and flown to New Orleans. Obviously too much cheese that night. It felt like an attempt at a Rain Dogs era Tom Waits tune but, by way of a happy accident, veered off into Magnolia Electric Co. territory. It wrote itself within about 15 minutes.

FTR: The track’s lifted from your upcoming album, Trembling Tongues Make Magpie Bait. What can you tell us about recording the album?

It’s been slowly pieced together over the past couple of years in the makeshift studio we’ve created for ourselves at Ian’s house. On a personal level it’s been a rather eventful couple of years for one reason or another, which has meant that it’s also been quite fruitful for songwriting. I cobbled together about 20 songs in this time and we whittled them down to 8 that weren’t just the strongest, but ones that sat best together as a collection.

We stumbled upon our sound simply through writing and recording together as we went along, rather than in a rehearsal room trialing ideas, so this record feels like the culmination of a few years of exploration. The interplay between guitars, Louisa’s violin; everything feels like it’s meshed together at the right time. I feel incredibly lucky to be playing with such a talented bunch of people and I’m really excited for people to hear the finished article.

FTR: Where does the title come from?

Trembling Tongues Make Magpie Bait. It’s a rather cryptic way of saying that the words to treasure most from people are sometimes those they find hardest to say.

FTR: You’ve mentioned it was inspired by, “the leap into the dark” that is parenthood, how has that changed your songwriting? Did you set out to write about it?

It was never a conscious decision to write about becoming a dad, but I think it was unavoidable. Just as it is for most people, I found it the most incredible and life changing experience. You’re suddenly handed an entirely new centre to your universe. With that comes a set of feelings, the intensity of which you’ve only ever tasted a fraction of before. And it was scary. I’m someone who doubts myself a lot, and when you mix that in with an obsession to give this new little person the best life imaginable the pressure can feel pretty intense. It can’t help but bleed into some of the songs.

FTR: Who are your musical influences? What were you listening to when you made this record?

FTR: What about influences outside of music?

Books and films. John Updike was a particularly significant influence lyrically. And I’m quite partial to a James Stewart western.

Because it’s consistently wonderful and thrilling to see how a germ of an idea can mutate into something with a life all of its own.

FTR: What are your aspirations for this record?

That people enjoy it and that it reaches a few new ears. But I’m really proud of it regardless of how much interest we get.

FTR: What are your plans for after this album? Touring? More music?

We’re off to Ireland on the 10th & 11th March to play Cork and Ballydehob and then London on the 18th March. After that? Hopefully lots more gigs and maybe even a couple of festivals before we embark on writing the next record.

One thought on “[PREMIERE] Cat Meat – Caught By The Ricochet”