What makes a good record label? Certainly if you’re looking for commercial bounty rather than critical acclaim it makes sense to move with the current musical trends, but we’d  argue we want a label to exist beyond fashion. The best labels are those reliable finders of unpolished gems, those who are happy to put records out they believe in, without worrying  about whether they’re commercially viable. Essentially we want our record labels to be willing to take risks and release great, and timeless music.

One label that seems to be embracing that ethos is Chicago’s Trouble In Mind. The label, who’ve put out music by the likes of Ultimate Paiting, Primitive Parts and Omni, seem to be able to pick gems out of the air. What’s perhaps most impressive though is their willingness to get behind records they believe in, regardless of genre. Alongside the shuffling-pop of Ultimate Painting sits the contemporary classic musings of Matchess, alongside Primitive Parts agressive proto-punk lies the electronic explorations of Espectrostatic. It seems to us that if Trouble In Mind like a record, they don’t seem like they’re bothered what people want to call it, or even to an extent whether anyone else likes it, and that’s perhaps exactly what we want from a record label. 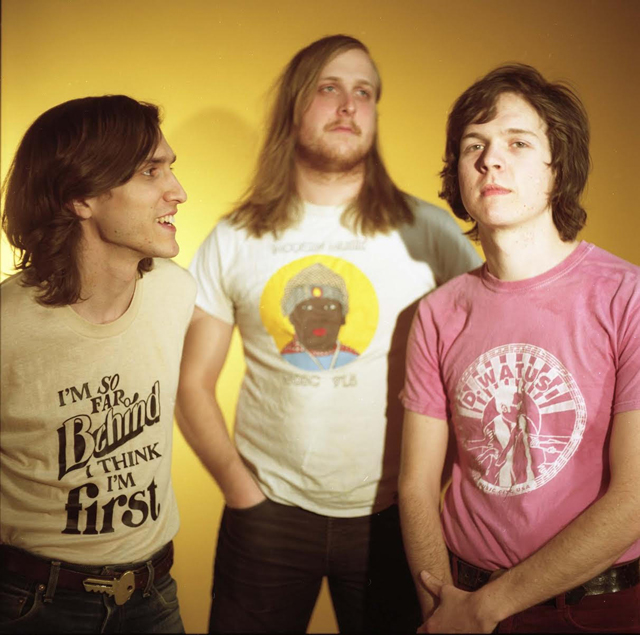 One band Trouble In Mind really seem to like, is Nashville’s The Paperhead. A trio, consiting of Ryan Jennings, Peter Stringer-Hye and Walker Mimms; The Paperhead recently released their fourth, and so far best record, Chew. Psychedelic may have become just about the most overused word in music journalism, but if there’s one band who truly embrace the sound of the original psychedelic visionaries, it’s The Paperhead; they even lift their name from a line in My Clown, a track from the largely forgotten British psych band, July.

What The Paperhead understand is that psychedelic music isn’t just about drenching everything in reverb, and foregoing strong structure; indeed Chew is a remarkably stream-lined and focused recording. Chew is a record loaded with sweet poppy curve balls, and free-flowing musical experimentation. Take a track like Pig, two and half minutes long it builds around a twanging banjo, aggressively fizzing electric lead and crashing drums. Lyrically, Pig seems to cast the singer as pig going happily about his life before he’s suddenly threatend with slaughter, it’s the middle ground of a Monty Python sketch, a barn-dance and The Byrds. Elsewhere, Love You To Death has a shade of the free-form art rock of DRINKS, while Dama De Lavanda is an almost mariachi take on The Kinks, while the title track, tucked away last on the record, is a bonkers instrumental, that reminds us a little bit of the theme song to Rhubarb and Custard. Chew is fascinating, challenging and most of all a whole lot of fun, there’s a good chance you’ll never hear another record that sounds anything like this.

Today, The Paperhead have put together a tape that simply picks out some of their favourite tracks. This mix showcases influences that are every bit as eclectic as you’d imagine, from the jazz of Duke Ellington, through to the Penguin Cafe Orchestra’s instrumental genius and the stunning harmonies of Nasvhille’s own Louvin Brothers.

Walker:Sometimes I play this while waking up. When I do, I feel like a fern frond unfurling.

Walker: This is a swaddling jam-chant with details in all the right places.

Walker: Duke Ellington, “Money Jungle”: Listen to Mingus punish his bass. Is he pissed? The crown jewel of a strange, unrehearsed session among two living giants and their patriarch.

Walker: In honor of the breathless, muscular, elegant Jaki Liebezeit. Here he recreates the rolling tide on a beach of electronic textures. At once living and breathing, yet motorized. Rest in precision, Jaki.

Ryan: Legendary… Prog is the new Psych, everybody knows! And Gong is the freakiest, most fluid, lighthearted, heaviest, happy, not happy, full time innovators. RIP Daevid Allen and thank you

7. Terry Riley
Ryan: Sick footage of god knows what ((Shri Camel??)(maybe Cooper Crain knows)) but amazing tones and pure meditative beauty. It is intonation-based developments on the northern Hindustani classical music he studied and blended with his own western jazz style.
8. Louvin Brothers – I Don’t Believe You’ve Met My Baby

Ryan: This is what it all comes back to, our Nashville forefathers. Purest harmonies ever, divinely inspired! We’ve become accustomed to recording near a Louvin Brothers museum if that’s any indication.

Chew is out now via Trouble In Mind. Paperhead tour the UK in April, details below