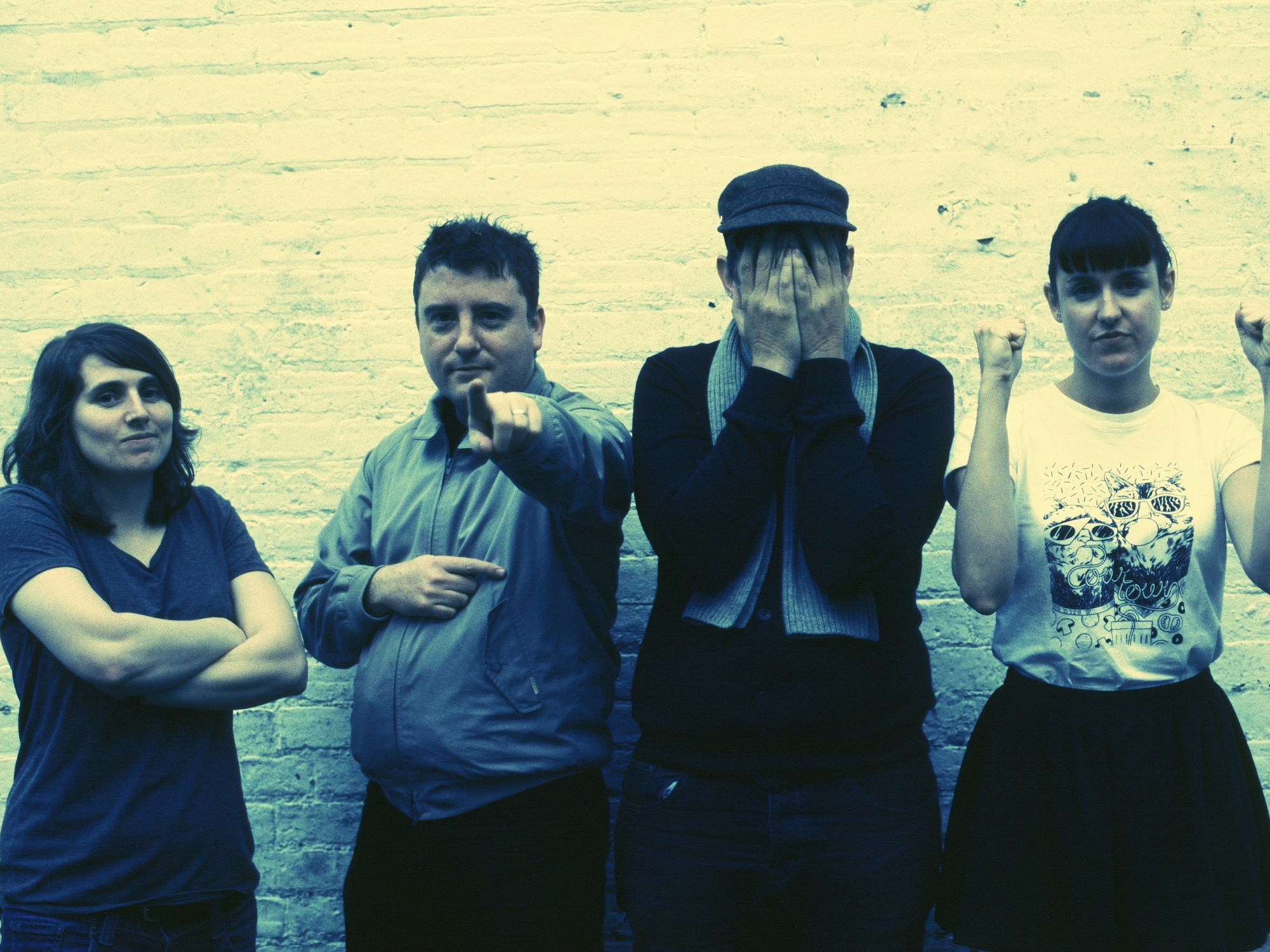 Regular readers of this site will already be well aware of The Hayman Kupa Band. The coming together of Hefner frontman, turned solo indie-popper turned musical historian Darren Hayman and former Standard Fare band-leader, turned solo star, turned Mammoth Penguin, Emma Kupa. The Hayman Kupa Band is the combination of two of music’s most hard-working people, and almost inevitably it’s taken them a little while to get around to actually finding time to put out and promote their debut record.

The Hayman Kupa Band record, is one well worth shouting about though, a melding of two very different songwriting talents coming together over a shared love of Mel C and Bryan Adams and ending up sounding somewhere between The Beatles and Sonny & Cher. Today, Emma and Darren have been good enough to take some time out and discuss how the project came together, their, sort of, mutual love of each other’s songwriting and not really liking other people’s duets. 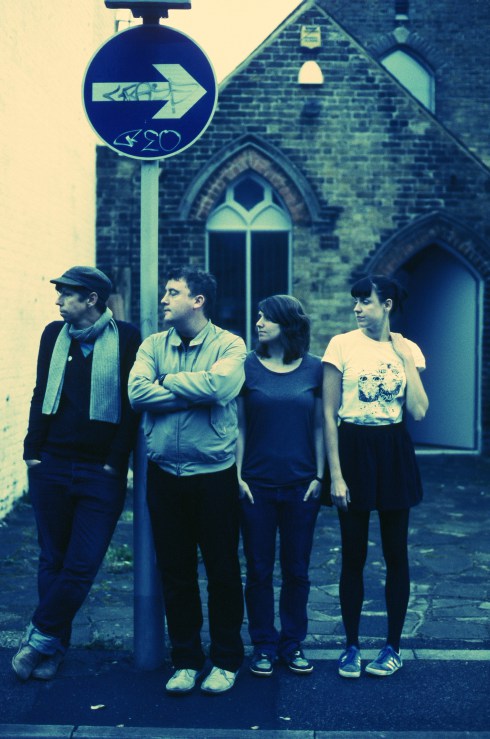 FTR: For those who don’t know, who are The Hayman Kupa Band?

Emma: We are Darren Hayman and Emma Kupa on vocals and guitar, Michael Wood on bass and Cat Loye on drums. We’re based in London and have been playing on and off for a few years.

FTR: How did you come to work together?

Emma: Darren and I had shared a few gig bills then one time Darren asked me to sing on a single he had written for the Fortuna Pop singles club. We worked well together and there was a suggestion that we might write more duets. Not long after, I sent Darren some demos of duet songs I’d been working on. Then a few weekends were spent at each other’s house co-writing the rest of the album. We then recruited Michael and Cat to fill out the sound and complete the band’s line-up.

Darren: The song I’d written ‘Boy, look at what you can’t have now’ sounded like Emma’s style of singing to me. I felt by having her on it it wouldn’t look like I’d ripped her off.

I like people who act on ideas. Everyone has tons of ideas, it’s easy to have ideas in the pub. When I said, ‘let’s do an album of duets’ I didn’t really expect Emma to act upon it, so this is down to her really. 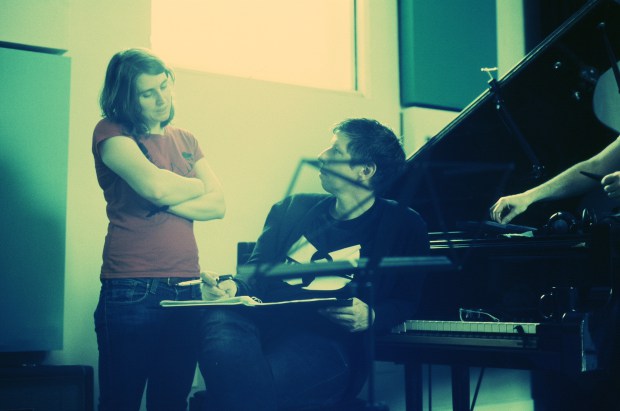 FTR: Are you fans of each other’s music?

Emma: I’d say we are selective fans of each other’s music. I (honestly) hadn’t heard of Hefner until I went to Darren’s house but he doesn’t believe me…

Darren: I don’t know what Emma means by ‘selective’ I adore every note Emma has ever sung or played. Emma was wearing a Hefner t-shirt when I met her.

FTR: You’ve just put out your debut album, what can you tell us about recording the record?

Emma: The recording is quite raw and very live – even most of the vocal takes were live with the music recorded in analogue in Big Jelly Studios over a single weekend. There are very few overdubs on the record. One song was recorded after we’d been out drinking….

Darren: It really is live. Usually when people say that, they’re talking shit. We are singing and playing guitar at the same time. We are amazing.

FTR: What did you learn about each other during the recording process? Are you both easy to work with?

Emma: I learnt to be more assertive and that it is possible to rewrite lyrics in the studio if you try hard enough and that it is worth it if you’re not happy with them. I enjoy working with Darren. I really value people who are open and communicative, and Darren is not afraid to say what he thinks!

Darren: This is code for ‘Darren’s a dick’ and I am. I’m not used to sharing the captain’s chair. I had a certain idea for a very ambient, open mic sound for the record and I think I did have to persuade the band a little to come with me on it. I also think there was some negotiating to be done with lines that one person had written for the other to sing. ‘I wouldn’t say it quite like that.’ that sort of thing.

Emma has such a direct way of writing about feelings and it’s something that I’ve done less and less. She was a big influence on the lyrical direction of the album and I found myself writing to compliment her style.

So in that sense I think of the album as maybe more lyrically belonging to Emma and perhaps more sonically belonging to me. But the great thing about collaboration is you never truly know what came from where. There’s many lyrics I can’t remember who wrote what.

FTR: What was it about the idea of an album of duets that appealed to you? Do you think it’s an underrepresented form?

Emma: I think for me I just really enjoyed the experience of singing with Darren and splitting the vocals in different ways. It’s also a fun way to write songs enabling a more ‘dynamic’ dynamic. With call and response, harmonies or just doubling up the vocals.

Darren: It’s an underrepresented form but that’s because it’s hard. It makes sense that most songs come from a singular voice. I actually can’t think of many duets I do like actually. I think what’s interesting is that we’re an impossible couple and to me it sounds like two people expressing a relationship but not actually talking about it to each other. It’s like both of them are just talking to the listener.

FTR: We read you recorded the album a number of years ago, why did it take so long to come out?

Emma: I think the short story is everyone had a lot on so we had to wait until we had time to get it out there!

Darren: It’s my fault really. My life has overwhelmed me. Emma does more of the work in this band and I’m very grateful. It might have gotten forgotten if it was down to me.

FTR: Fika Recordings put the record out, and you’ve both got relationships with a number of record labels, are labels still important?

Emma: I really appreciate the support of labels like wiaiwya, Fika and Fortuna Pop (RIP!). They take the brunt of the production work and provide a warm positive energy at the point in the process where I feel exhausted, drained and hopeless about it all, with no perspective on the quality of what I’ve just made. People respect these small labels and enjoy discovering new artists through them, so yeah labels are important!

Darren: Making records for me is a very lonely experience. I don’t work in bands very often, I have a pool of musicians who work with me. I need the label otherwise the whole experience would be too insular.

Tom (Fika), Grumpy Sean (FPOP) and John (WIAIWYA) are my friends. It makes it more fun. 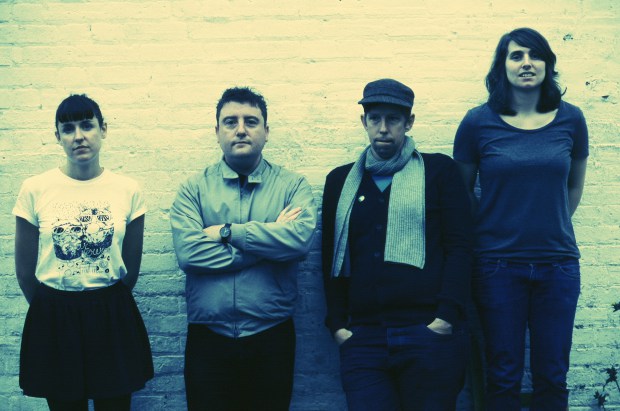 FTR: Who were the inspirations behind the record? We’re taking Sonny & Cher as a given, but any other duos?

Emma: I think we were aiming for a poppy 60s vibe. Like Van Morrison’s brown eyed girl.

Darren: On the very first single I was thinking about the Bryan Adams and Sporty Spice single. With the songs there were lots 7th chords and the songs kind of reminded me of early 60s guitar bands, The Beatles, Gerry and the Pacemakers etc.

That’s kind of why I wanted to record it live with high mics and mix into mono.

FTR: You’ve described it as a record about relationships, was that a conscious decision? Was it difficult putting yourself in the other person’s shoes?

Emma: I think that’s just what we ended up writing about. Especially as it can reflect the dynamic of our singing duets. We chatted a lot about relationships past and present in between writing so we were able to co-write reasonably easily.

Darren: It was surprisingly easy. We were talking about our relationships past and present whilst writing and the person singing isn’t always singing their own thoughts or words. In that way I think a lot of the lyrics are quite gender-less.

FTR: You’re both obviously working on a lot of other projects, how do you know which song will go best with which project? What makes a song a Hayman Kupa Band song?

Emma: One of the great things about this project was that we could bring little parts of unfinished songs or bits of music that had been lying around to the table and ask the other person to write something new or help finish the song. There are very few songs on the album that one of us wrote completely on their own.

Darren: The chorus of ‘No More Bombs’ was something I’d had lying about and the ‘Let’s Do Nothing’ had existed and been played live in a different form before. But apart from that I was writing for the project. The decision as to what song is for what project isn’t made after it’s written, it’s made before. I’m going to write a tune for Emma etc.

FTR: What else are you working on at the minute?

Emma: I have a new concept album coming out soon with Mammoth Penguins (Mammoth Penguins & Friends – John Doe, released on wiaiwya on October 13th) that is probably the most ambitious thing I’ve ever been a part of. Then I need to get finishing my next Emma Kupa solo record.

Darren: I’m dry. I’m finished. I’m out of songs. I’m drawing pictures of trains for the rest of the year. 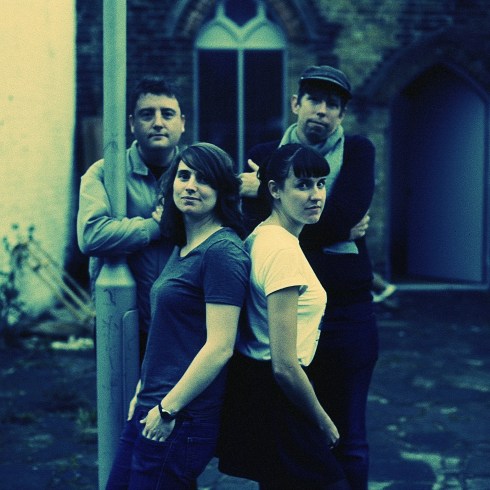 FTR: What is your favourite song the other one has written?

Emma: Darren wrote most of ‘My Right Arm’ and I think it’s a really beautiful sad song.

Darren: That’s a good question and I’m bad on titles but there’s a few of Emma’s songs that made me spit out my tea for laughing the first time I heard them. What is that one? ‘ You were only sixteen, what was I thinking?’ something like that.

FTR: What are your plans for the band?

Emma: we’re just gonna have fun and hang out wherever we can.

Darren: My plan is to keep apologising to Emma for not doing enough and being generally a mess.

Darren: Could be, but I need to find out about this ‘selective fans of each other’s music’ thing means.

The Hayman Kupa Band’s self-titled debut album is out now via Fika Recordings. Click HERE for more information on the project.