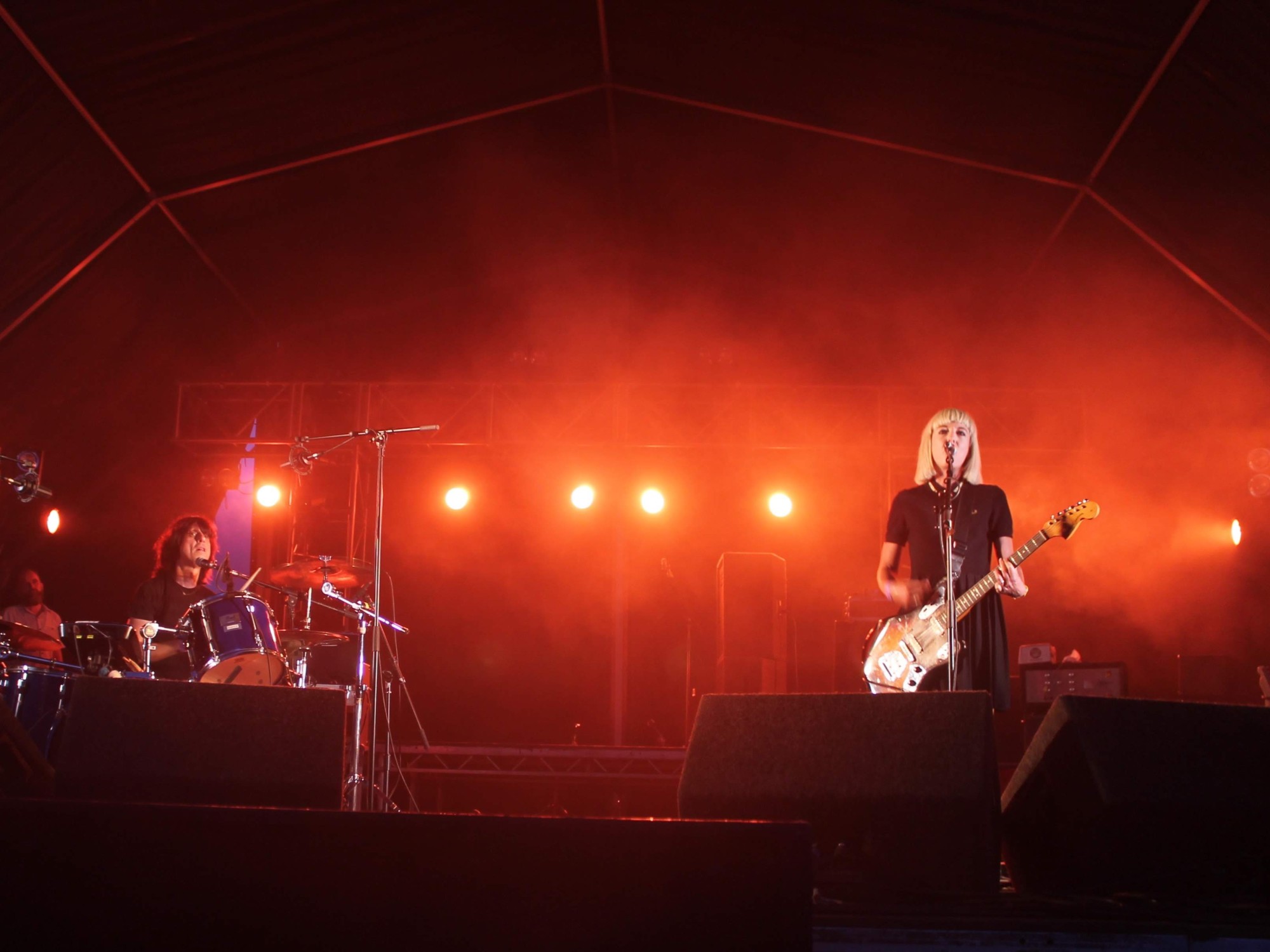 Like many long-running festivals, Indietracks is at something of a cross-roads.  The initial remit of servicing the Indie-Pop scene of the early 2000’s has inevitably evolved and the festival now takes on a somewhat punkier, noisier feel than it originally did. On top of that, it is a festival that has a well-established returning clientele, yet equally has room to reach out into new markets to try to attract a new fan base. Arguably, the headliners on Friday and Saturday were a perfect example of that cross-roads. On Friday, The Lovely Eggs, represented returning heroes; their fifth appearance at the festival, taking in every possible stage en route to the main stage, a band who have evolved with the festival from their lo-fi indie-pop routes into something altogether more intriguing. On Saturday, British Sea Power, arguably the biggest band who’ve ever played the festival; cult oddities, who exist outside the Indietracks bubble, yet somehow feel a perfect fit for both attracting newcomers to the festival and not alienating the regular attendees.

The Indietracks opening night, a small number of bands, post-work on the Friday night, is always a beautiful way to ease into a festival, and this year was no exception. Opening proceedings were upcoming London-quartet, Worst Place. The band, best known for a single that came out as part of the Art Is Hard Singles club, are a neat summation of where guitar music is in 2018. Their melding of the noisy early 90’s shoegazers and the sweet pop sounds of Camera Obscura is a winning mix. As with acts like Molly Burch and Alvvays, they fuse classic, almost retro-pop sounds with a more modern, energetic production. Live, their combination of winningly self-deprecating stage banter and ragged musical energy was hugely promising, and they saved the best to last in the shape of single, Dreamer. A band well worth keeping a keen eye on in the years to come.

Following Worst Place, were Sacred Paws. The Glasgow/London duo, now expanded to a four piece live band, were making their debut at the festival, however for Rachel Aggs, vocalist and guitarist, it’s something of a second home, having previously performed with Shopping amongst other projects. Sacred Paws are a band with a growing reputation and are quietly ramping up activities, presumably ahead of an upcoming album release. Much of the material performed here though was lifted from their break-out debut album, Strike A Match, which won the prestigious Scottish Album Of The Year award back in 2017. Rachel was a bundle of high kicking energy, the whole joyful set delivered with grins all around, and they’re an awful lot of fun to watch. Their complex rhythms, intricate guitar parts and gorgeous two-part vocals had the whole crowd dancing en-mass, and even if the material does get a touch repetitive by the end of the set, they’re a perfect choice to get any party going.

Closing the Friday’s proceedings are Lancaster’s The Lovely Eggs, the married duo of singing guitarist Holly & drummer David. Twelve years into their career the band have progressed from playing the train stage at the first ever Indietracks weekend back in 2007, to headlining the whole shebang, and you can tell in their own unique way, they were kind of moved by it all; “ta for sticking with us, you fucking idiots”, announced Holly from the stage. They ran through a career spanning set,  which went to showcase just how far they’ve come, from their almost nursery rhyme, only with much more swearing, like beginnings through to the fairly ferocious two-headed psych-rock monster they’ve now become. There were highlights throughout, Fuck It, dedicated to the Blood Moon, that none of us can see because, “it’s fucking cloudy, that’s life isn’t it”, brilliant recent single Wiggy Giggy and the inimitably daft, Have You Ever Heard A Digital Accordion, were all delivered with a triumphant feel and the crowd belted out almost every word along with them. As time has gone by, The Lovely Eggs have undeniably ramped up their game and twelve years in they show exactly what is still achievable in the modern music industry if you do it yourself. By not playing by the industries rules and by dragging themselves up and down the country time and time again, they’ve carved out a perfect, loveable niche, and even the most cynical of judges surely couldn’t begrudge them any of their recent success – long live the lovely, The Lovely Eggs.

Despite damp shoes and fuzzy heads being all the rage, Saturday at Indietracks starts if anything a bit too well, as two bands we wanted to see were on at the same time. While Derbyshire’s own Mighty Kids were bringing their melding of indie-pop and electro to the church, the winning combination of Panic Pocket and an actual, moving steam train was too much for us to resist.

The London duo are firm favourites around here and despite playing unamplified over the noise of a combustion engine they didn’t disappoint. The set got off to somewhat rocky start as the train lurched into life a little too boisterously sending half the audience cavorting forward nearly crushing those sitting at the front of them, from there on in it was plain sailing. With their vocabulary reduced to be a little more family friendly, their witty lyrics are actually funnier than ever, with tales of Sex And The City, dating mishaps and vibrators, all delivered with aplomb to a backing of casio-keys, acoustic guitar and their beautiful vocal harmonies, described by one punter as “Beatles-like”, frankly they were much better than that. A perfect, and uniquely Indietracks way to start a day.

From there we dashed over to the main stage for the energetic, garage-punk of Eureka California. Their latest album, Roadrunners, is probably their most lush and adventurous to date, and it was delivered here with trademark no-nonsense delivery. Marie Uhler’s tremendous drumming perfectly pitched against Jake Ward’s frenetic guitar work, at times they put us in mind of The Stooges, only playing about twice as fast. Thrillingly raw, and a large crowd was just reward for them after travelling all the way from Athens, Georgia to be at the festival.

From there it was into, or initially near to, The Church stage, as the place was packed, for sprawling London sextet, Tugboat Captain. Showcasing material both from their recent second album as well as an upcoming third record, much of which is borrowed from frontman Alex’s recent solo album as The Groke, their classically indie sound is ideally suited to the festival. Ambitious, literate and quite often painfully sad, their songs are perfect snapshots of growing older and struggling to grow wiser. They played with an infectious energy, often all members throwing their vocals into the mix, and they received a suitably rapturous response from the audience who had gathered. Fittingly for a band who titled their last record, Everybody Seems To Think That I’m A Raincloud, Tugboat Captain’s set was greeted by the heavens opening – unfortunate for The Smittens, who were over from America to perform on the outdoor stage and saw much of their audience diving for cover as a result.

Like most people we decided to keep a roof over our head, and that was good timing as the excellent Night Flowers were taking to the stage in the train shed. The London, via Hull and Boston, dream-pop act have grown into a phenomenally slick live band; the result of an impressively hectic touring schedule, they were strong contenders for the most professional sounding band of the weekend. Singer, Sophia Pettit, is a natural born front-woman, an oasis of tranquillity as her bandmates thrashed around her, creating dense soundscapes beneath her polished vocal delivery. Their lush sound might not be the shot of energy some of the slightly chatty audience needed, yet by the time set-closer, the sublime Cruel Wind, reached its finale, most were thoroughly won over.

They were followed on the indoor stage by Spinning Coin, The Pastel’s endorsed Glaswegian’s, who arrived with an impressive reputation, and produced a very classically indie set. The vocals got a little lost in places and it was all a little underwhelming at the start, however it picked up as it went on, with a touch of Grizzly Bear coming to the fore.

One of the weekend’s most talked about bands, were Brighton’s Dream Wife, and they drew quite possibly the largest crowd as a result. They delivered tracks from their critically acclaimed self-titled album, which are rightly lapped up. Their take on the Riot-Grrrl ethos, is perhaps a little too polished and smooth for personal taste, however it was fantastic to see a strong message of female empowerment entering the mainstream, and with excellent stage presence and fantastic energy, they more than justified the hype.

Another hotly anticipated set came from Dutch songwriter Annelotte De Graaf, aka Amber Arcades. Alongside her three-piece band, they’re currently in the process of promoting upcoming album, European Heartbreak, out later in the year on Heavenly Recording, and much of the set was lifted from that record. It makes for a strangely muted start, with a few teething problems with the sound, but they soon hit their stride and frankly they’re a class act. The new material seems to have left the motorik dreamier side of their sound behind in favour of an almost Americana twang in places, while other tracks took a more straight up rock feel. Towards the end they threw in old favourites, It Changes and Fading Lines, which gave the set a perfectly judged momentum, before finishing on a frankly stunning new song that already sounds like the best thing they’ve written to date. The sort of sound you’re not entirely sure how so few people can make, it’s probably the most memorable track of the weekend.

Closing proceedings were genuine indie-rock royalty, British Sea Power. The set was suitably adorned with whatever foliage they could forage, perhaps not as easy on a train museum as at some other festivals, and looking at the number of British Sea Power t-shirts in the audience, it was easy to feel they’d brought their own crowd as well as twigs. They began proceedings with excellent recent single, Machineries Of Joy, and continued to remind everyone just how many hits they have throughout their career, the likes of Waving Flags, Who’s In Control and A Wooden Horse, timely reminders of just how many great songs they have in their back catalogue. The increasingly terrifying looking people in giant bear costumes arrived on cue to dance in the crowd, pose for photos with kids and generally provide an unforgettable talking point; it was a perfect melding of novelty, nostalgia and the utterly surreal. The gimmicks don’t hurt of course, but by the time closing number, The Great Skua, rolls around, there’s no doubt it’s British Sea Power’s music that has done the talking, with its gorgeous use of strings and brass, it’s as fine an example of instrumentation in rock music as you could ever hope for. Ultimately it was hard not to conclude they were an unobvious but perfect fit for Indietracks; their tales of corruption, ecological disaster and for the most part hope, seemed to resonate more than ever, and as the international space station sped over the audiences heads, it was a triumphant moment in a weekend full of them.

Check back soon for part two of our Indietracks 2018 review