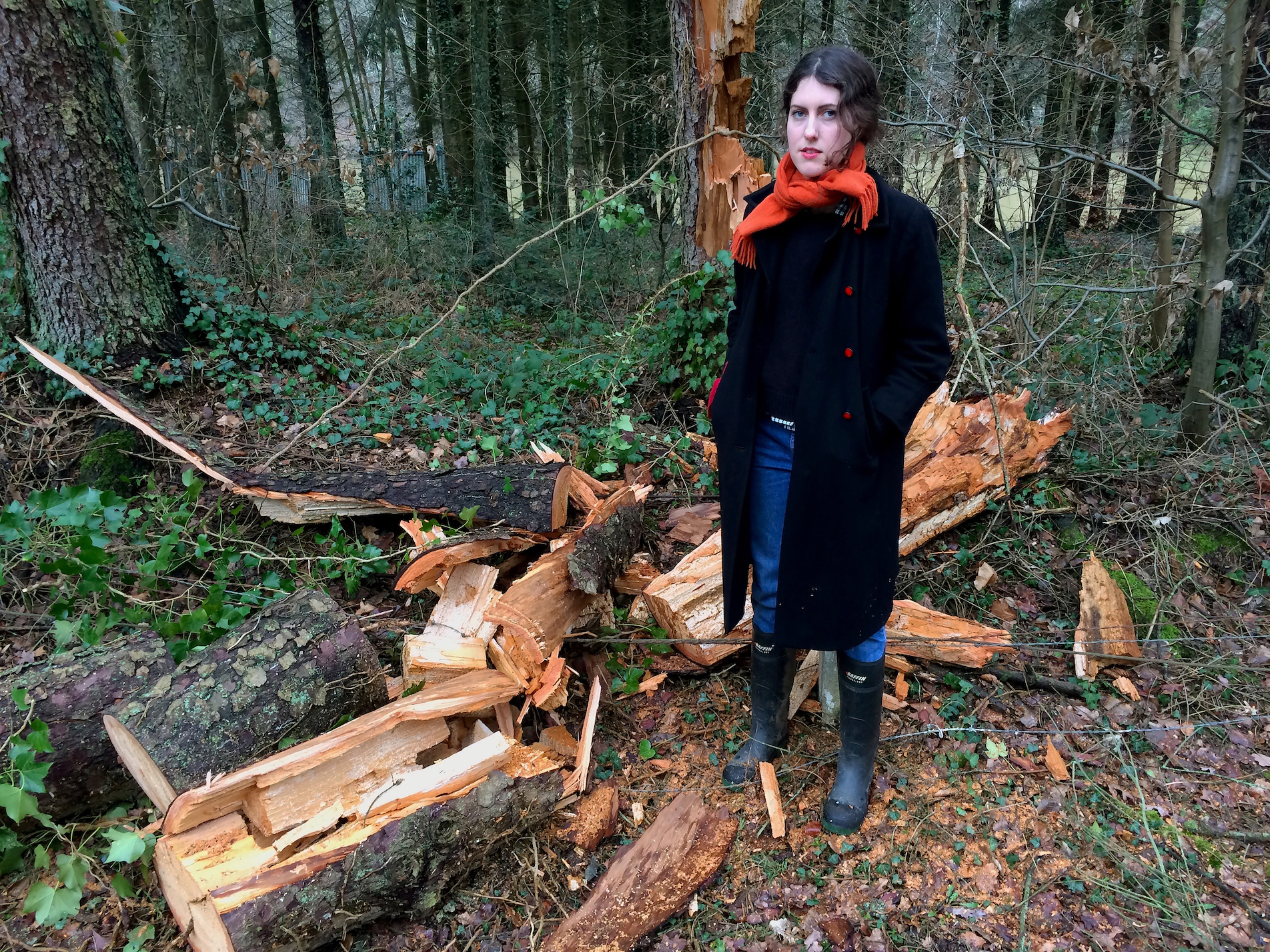 Hailing from the largely untapped musical city of Winchester, Keel Her is the musical project of Rose Keeler Schaffeler. With a prolific swathe of largely self-released material, Keel Her has, to some extent, been flying under the musical radar since Rose’s self-titled debut album back in 2014. All that changed recently with the release of a brand new album, With Kindness, that emerged through Tim Burgess’ O Genesis label.

With Kindness was a home recorded project, the seventeen tracks detailing a particular time in Rose’s life. Throughout there’s musings on mental health struggles,  difficult relationships and a general sense of frustration at the path life was taking. It’s in a way a record about being in a rut, delivered now from a place that is thankfully behind its creator, “although I am not feeling like I did then or in the same situation, it feels like it had to be recorded for the feelings to dissipate. Catharticism?”

Musically, the resultant record is an eclectic and often subtle affair. While some records make bold musical statements, With Kindness instead plots an almost insidious route into your mind, there’s a jot of the steady drift of Ultimate Painting, a smidge of the minimal electronics favoured by Sweet Baboo, a bit of Sauna Youth-like arty sing-speak vocals. It’s a record that offers two equally enticing options, a cursory listen creates a truly wonderful back-drop, while delving deeper in shows the depth and intrigue, reveals the hidden gems, from the strutting Necessities to the easy drifting majesty of Not The First.

Following that release, today we speak to Rose about how writing is good for your mental health, not knowing who her influences are and why even if making a living out of music was an option, it wouldn’t be the one for her.

FTR: For those who don’t know, who is Keel Her?

It is me, Rose (Keeler-Schaffeler)

FTR: Your new album, With Kindness, is out next month, what can you tell us about recording it?

It was recorded in the summer of 2018, at home on a 16 track Studer tape machine, with my partner, James. The approach was mainly: recording guitar, then having our drummer friend Juan come over, record drums to that, and then I overdubbed the synths, violins, etc. I played most of everything else, James played a few things here and there. When it came to mixing, we started doing it together but he has so much patience and dedication, whereas I did not and drifted away to something else; and the end result was exactly what I’d wanted from the songs.

FTR: There’s an impressive list of collaborators on this record, do you enjoy working with other musicians?

I do, but it doesn’t happen so much. James and I work together really well because it’s so relaxed, but maybe that’s due to the nature of our relationship. I am quite introverted and so it is difficult for me to be proactive in creating/developing musical relationships, even ‘normal’ ones. Recording with R. Stevie Moore was a lot of fun, because he could always make it interesting, and there was never any judgement. But anyway, musically I feel like I’m constantly one step behind of myself, so I’m never bored doing it alone.
FTR: Is there anyone you haven’t worked with who you’d like to in the future?

Nobody in mind, but I admire many musicians. I think my lack of confidence could get in the way.

FTR: We read the album was written over a number of years, does this record define a particular part of your life?

Probably my early-to-mid-twenties. I wasn’t in a good relationship; I didn’t respect myself enough to even notice that at times. Then I became a participant in a research study about self-criticism, based on a book by Professor Paul Gilbert. It changed the way I think about myself and others. But a lot of things happened after that tested my integrity, I learnt a lot about what my values are, who is important in my life, etc.

FTR: The album’s coming out via O Genesis Recordings, how did that come about?

In 2012 I stayed at R. Stevie Moore’s house for a few weeks. We recorded a lot at his, and one day went to his friend’s studio (Billy Anderson) and recorded two songs of mine together; ‘Boner Hit’ and ‘With Me Tonight’. Stevie sent these to Tim Burgess, as Tim had put out a RSM record on O Genesis. Tim said he loved the tracks and put it out later that year. When I left Critical Heights and started thinking about doing another album, I sent Tim the demos and he was instantly up for doing it.

I like No Control, as I wrote and recorded really quickly one afternoon. There’s a demo of it called ‘No’ on my Bandcamp somewhere. I like the vocal melody, and it feels good to know I can create one by accident or when I’m not really aware of my head and my hands.

It would be lovely if people buy it, enjoy it, get inspired by it. I don’t see music as a viable career for me nor do I wish it to be, which I think people find a bit unbelievable; if you could make a living off music, you’d never have to ‘work’ again. But right now aside from music, I work with patients in the community, and meeting people I would otherwise probably never meet is pretty inspiring. I really enjoy it, and I would always want to do something that helps people who need it.

FTR: Who are your influences? What were you listening to when you wrote With Kindness?

I’m quite unaware of my musical influences, and there isn’t really even a handful of people I listen to a lot, so actually it’s quite nice when people tell me what or who they can hear in my music. Around the time I was recording the record, I remember listening to Air, The Go-Betweens, Can, Nico, but then I was reading the Go-Betweens, Can, and Nico biographies. I’m always influenced by people like R. Stevie Moore; he doesn’t stop, and does whatever he feels like.

It keeps me somewhat sane, and process the ever-changing world. If I don’t write for a while I start feeling low, which is why London wasn’t so good for me because it restricted me to making music at certain times.

FTR: The album’s obviously coming out on vinyl, are you attached to physical formats? Do you see streaming as a good thing or a bad thing for the music industry?

It’s nice to have a physical format and I prefer to listen to music that way, however I do feel bad for creating more physical ‘stuff’. I don’t use Spotify but I do use YouTube and have found a lot of great stuff that way. I think streaming probably has lots of pros and cons; it’s very easy to listen to music, you can discover amazing things through algorithms, but financially it’s not that great for musicians. I did use Spotify when my iPod wasn’t working, and I heard this advert about signing up for premium so you can skip as many tracks as you want – it made me laugh, because I like not skipping tracks. I would prefer to sit through a track I find boring or bad. You can probably find something interesting in it anyway.

FTR: What can people expect from the Keel Her live show?

It’s about 30 minutes of whatever we can squeeze in from the album. I’ve written a fair bit since finishing this record, so maybe some new songs too. Nothing old because I can’t play much of my old stuff without cringing!

FTR: What’s next for Keel Her?

Some UK and Europe shows, but mainly more recording as that is what I love to do. I have started compiling stuff for my next album, a split with my friend who runs a small label and cutting service called Loosehair, and an EP about the menstrual cycle. I’m doing some vocals for Tim Burgess’ new record, James and I are working on a separate project, and I’m playing bass for Victor M Jakeman, which will be fun. Oh, and a move to the countryside is on the horizon.

With Kindness is out now via O Genesis Recordings. Click HERE for more information on Keel Her.

One thought on “Keel Her – In Their Own Words”