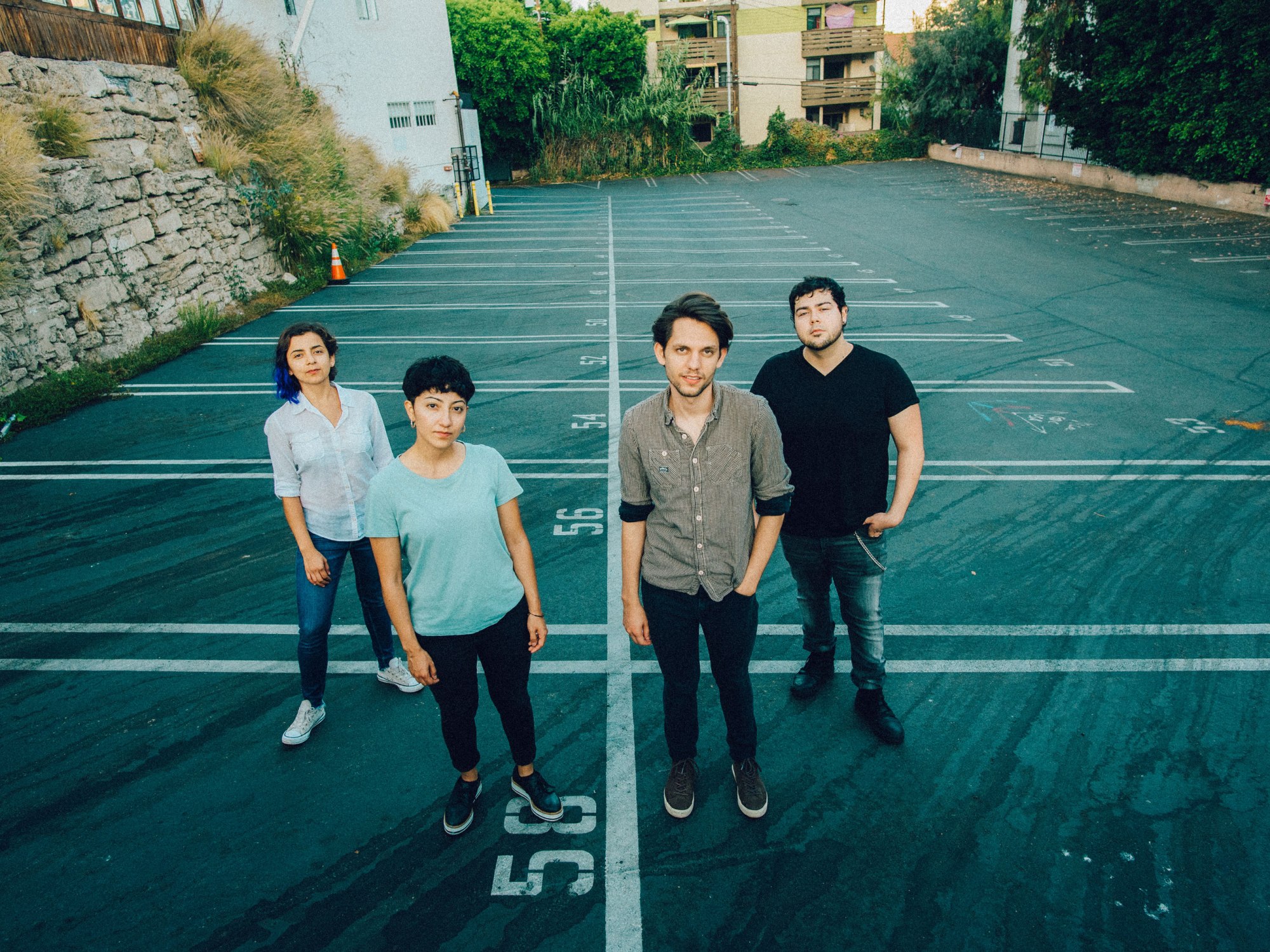 The first time we saw Girl Ray was an opening slot at The Victoria, with little more than ourselves and their parents in attendance: it would be fair to say things have changed a little since then. Now on constant rotation on the radio, touring enormous venues with Metronomy and on the verge of releasing their second album, Girl Ray are living, and hopefully loving, their pop dreams. This week the band have shared the second single, and title track from the record, Girl.

Girl Ray promised us pop-bangers, and as always they’ve delivered. Girl shimmers and shimmies on slick harmonies, processed beats and Chic-like, distinctly funky guitar lines. Discussing the track, Poppy from the band has suggests it’s about, “an intense crush where you lose all reasonable brain thoughts and can’t conceive why the hell things shouldn’t work out in rom-com style perfection”. Girl Ray’s slide into polished pop-perfection is as delightful as it is surprising, their dreams of Arianna Grande-style arena tours are surely just a blink of an eye away from coming true.

Girl is out November 8th via Moshi Moshi. Click HERE for more information on Girl Ray.

Continuing quite possibly the longest build up to releasing a debut album we’ve seen, Kate Davis has this week shared her latest single, Daisy. The track is the opening number on the New York-based songwriter’s upcoming record, Trophy, which we’ve been getting ludicrously excited about all year, and will arrive next month on Solitaire Recordings.

Much of Trophy grapples with loss and grief, and perhaps none more so than Daisy. The track lifts its title from the names Kate’s father suggested she and her sisters should give to their future children, as Kate recalls, “he gave my sisters flower names: Lilly, Daisy and told me, “Volcano.” He had a good sense of humor”. While the song is unquestionably about her father, it’s also about Kate, about her realising both what her father wanted for her, and how that still affects her life, “I’ve been through enough lately, but I keep fucking up, I keep fucking up, I keep fucking Daisy”. The track seems to go through a series of emotions, and they’re matched in the tumbling nature of the music, as a steady drum beat pulses like a heartbeat, around which runaway guitar-lines and flittering vocals, duck and dive, entwine and part. While songs about grief are often sombre and reflective, here Kate instead mirrors the other side, the uncontrolled spirals, the highs and lows of learning how to make a life when a huge part of it has been torn away. The anticipation around Trophy just ramped up another level, if that’s even possible.

Trophy is out November 8th via Solitaire Recordings. Click HERE for more information on Kate Davis.

3. Lewsberg Head Out Into The Cold

Rotterdam based quartet Lewsberg emerged back in April with the release of their self titled debut album. That release saw the band bag a phenomenally well received set at End Of The Road, and the band are currently in the midst of a U.K. tour. With a new album already in the pipeline for next year, this week they’ve shared the first material from it, in the shape of new single, Cold Light Of Day.

Cold Light Of Day begins with a thrillingly muted guitar-line that instantly traverses the history of alternative music; it’s laced with the Velvet Underground’s swagger and Wire-like intensity (in a good way, it sounds almost exactly like the start of I Am The Fly). From there on in we were instantly hooked, as the laid-back vocals and meandering guitars drift in and out the tracks motorik-hum. They even throw in a guitar solo, which even surprised guitarist Michael Klein, who notes, “it baffles me every time, because I’ve never cared for, or in fact even hated, guitar solos”. That’s just the mystery of music, sometimes what you hate is just where the music takes you, wherever Lewsberg are going next, we can’t wait to find out.

Lewsberg’s new album will be out in 2020. Click HERE for more information.

Tummyache is the musical project of Brooklyn’s Soren Bryce, after releasing music under her own name for six years, Soren adopted the Tummyache moniker to deal with, “a new set of emotions”, discovered while living in Brooklyn. Much of Tummyache’s upcoming album, Humpday, reflects on themes of anxiety and Soren’s ongoing mental health complications, in particular her brand new single, Commonplace, which she shared this week.

From the somewhat minimal opening of gentle Rhodes-like keyboard, Commonplace gently builds, a processed beat in a disorienting 6/4 rhythm provides an initial lift, before a Radiohead-like meander of guitar sends the whole thing spiralling off into claustrophobic headspace. The lyrics feel almost deliberately unfocused, like a mind whirring with doubt, as the songs builds to a particularly frantic crescendo, the words depart all together, the voice becoming not a tool of communication but a howl of release. Intense and intriguing, this new chapter for Soren’s songwriting might just be her finest offering yet.

Humpday is out November 1st via Poor Man Records. Click HERE for more information on Tummyache.

1. The Hot New Trends In The World Of Branches

Trends are a Los Angeles based quarter that started life as the solo project of Marina Paiz. The members bonded over both their love of music and shared Latino-heritage forming a bond way beyond just a band, as Marina puts it, “it always felt like a family”. Trends are currently building up to the release of their debut album Palettes, and have this week shared the first single from it, Branches.

Walking a similarly creative line to acts like Mothers or No Vacation, Branches is something of a musical odyssey, slipping seamlessly from moments of dreamy wonder to jagged art-rock, impressing equally with light as a feather vocal lines and angular, jazzy drum patterns. Lyrically, the track seeks to explore the idea of growing up, and often growing apart, branching out from the trunk of our youth, often finding ourselves distant to our closest friends, yet still connected by that unbreakable bond. Trends may go in and out of fashion, yet like yo-yos and bootcut jeans, people will keep coming back to this band time and time again.

Branches is out now. Click HERE for more information on Trends.