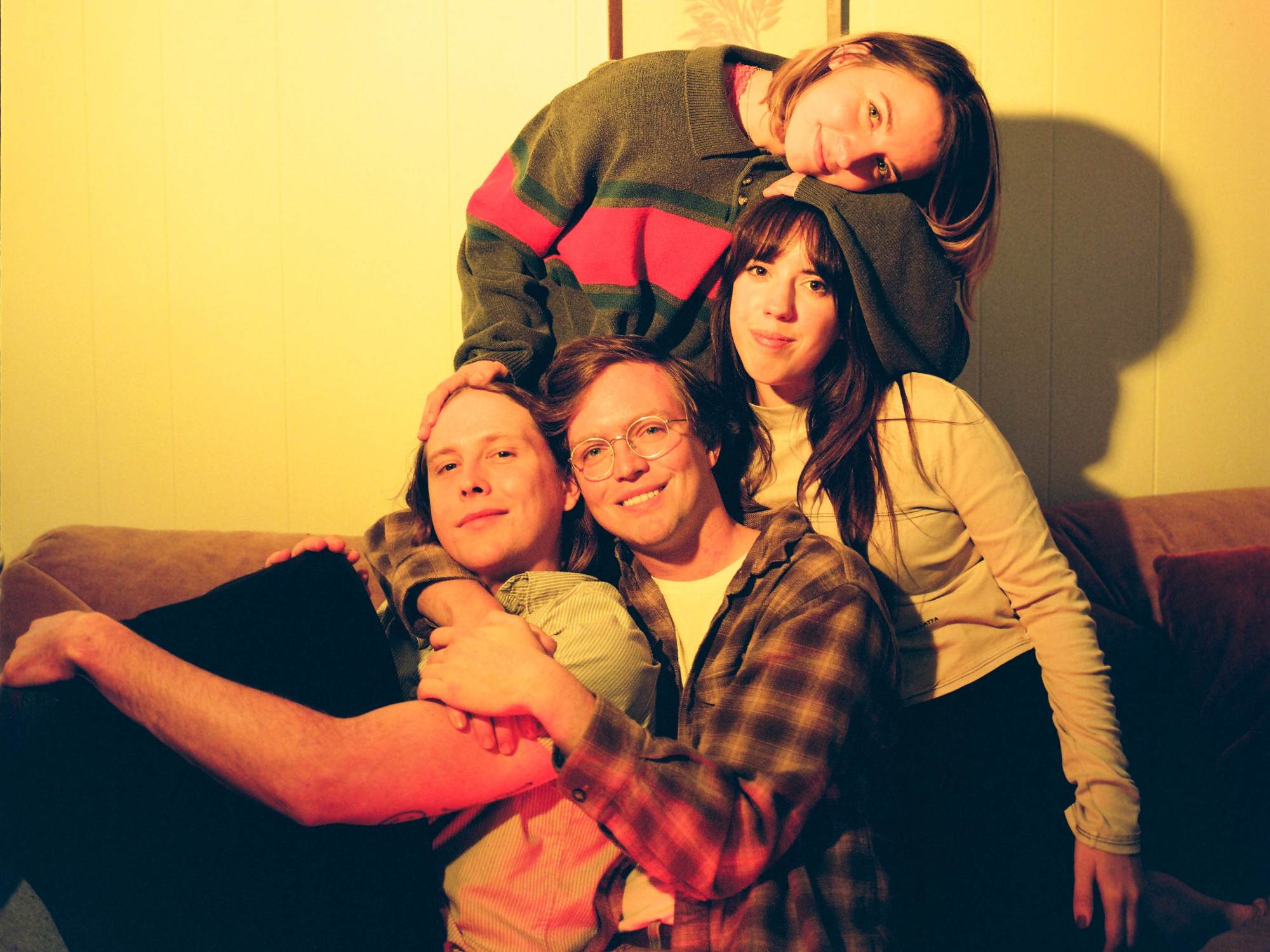 Sometimes in the modern musical landscape, it’s easy to feel that talent doesn’t always get its just rewards. With creating music now so accessible, and room at the top table so limited, so many wonderful bands, even ones with seemingly large fanbases, can struggle to get the deals and opportunities they seem to deserve. Then just as you begin to think the world is just completely unfair, the green shots of talent emerge to keep you hoping – Why Bonnie are one such green shoot.

We last heard from Why Bonnie back in 2018, when they released a pair of brilliant and beautiful EPs, that caught the ear of so many bloggers without quite breaking through into the wider world. Released through the Sports Day Records imprint, In Water was a stunning tribute to vocalist Blair Howerton’s older brother, who’d passed away years earlier while the follow-up, Nightgown covered wider themes and a broader musical pallet. Now two years on, the Austin-based quartet have recently signed to Fat Possum Records, and this Friday will share their latest offering, the Voice Box EP.

Voice Box is a record that seems to build on Why Bonnie’s sound, a band pushing out in a variety of directions, whilst never forgetting what made them so appealing in the first place. Opening track, Bury Me, starts off with a similar easy-lushness to their earlier material, yet as it progresses it builds to a driving middle section, before sliding out of it into something broader and more sonically ambitious, with bright synths and rhythmic guitar clattering. Elsewhere, the title track is an instant stand-out, Blair’s stunning vocal accompanied by a backing or prominent bass, and bouncing keys, while Jetplane pairs everything back into an almost alt-folk package. Perhaps the biggest departure here comes in the shape of recent single Athlete, with prominent grungy-guitar lines to the fore alongside a wonky-sounding keyboard line Blur would be proud of, and the driving crunch of drums, it’s definitely Why Bonnie, just not as you’ve ever known them before.

Ahead of that release, Why Bonnie have taken some time to answer our questions, discussing influences, changing recording processes, and, “taking it day by day” as you release a record in the midst of a global pandemic.

FTR: For those who don’t know who are Why Bonnie?

Why Bonnie is Blair Howerton (Vox, Guitar), Chance Williams (Bass), Kendall Powell (Keys, Vox), & Sam Houdek (Guitar) Why Bonnie started as a bedroom recording project for me, and I cast Kendall (who’s also my childhood bestfriend) when I moved back to Austin from college. Chance & Sam were active musicians in the scene as well, and through playing shows with each others’ bands, & all just being fans of each others’ music, this lineup kind of naturally came together.

FTR: You’re building up to the release of your new album, Voice Box, what can you tell us about the recording process?

We recorded Voice Box over a few months at Estuary Recording in Austin. Why Bonnie started as a bedroom recording project for me, & this EP is our first collection of songs that were more or less collaboratively written. We went into the studio having played most of these songs live already, so it was a very natural process, and almost more like playing a show than a really intensive “studio” experience. We didn’t have a proper producer for this one, so it was a lot of just trying out different sounds/parts & seeing what stuck. Ultimately it wasn’t too far off from our original vision, but there are a lot of little moments in it that came out pretty organically in the studio.

FTR: What did you do differently with this record compared to your previous EPs?

There was a bit more improvisation on this EP than the last two since it was more of a collaborative effort. sonically, we definitely went for a more polished and expansive sound on this one which may be a result of us recording in a full studio for the first time.

FTR: We understand this record is coming out on Fat Possum Records, how did that collaboration come about?

We had the EP done for quite some time and had been shopping on our own, but our booking agent introduced us to folks at Fat Possum & we just got along really well. We’ve been fans of the label for a while & had a chance to link up with them when we were on tour. we bonded over a mutual love for 90’s emo music of all things. we’re super glad to be working with them.

FTR: What are your aspirations for Voice Box? Do you see music as a viable career in 2020?

Voice Box is kind of our “official” introduction in a way. The band had been pretty DIY up to this point. This is our first real studio record and kind of serves as a transition between the lower-fi releases we’d put out & the new music that we’re currently writing.

Re: viable career, it’s definitely been complex navigating a time with so much uncertainty. With music, you just never know but we’re all willing to take the risk. That said, there’s been a cool shift in connecting with fans and/or peers online in a weird disconnect to connect sort of quarantine phenomenon. We are grateful to the teams we work with at High Road Touring and Fat Possum to be as supportive as they are through this time as well.

I think music is a crazy kind of hybrid between introverted and extroverted art. Half of the equation is deeply personal. Time spent pouring over songs, hours re-doing takes in the studio, writing and tweaking lyrics, and trying to craft this piece of music that represents where you are in the moment as a writer and player, but also will still resonate 5,10,20 years down the line (if you’re lucky).

The other half is live performance. We as a band get as much fulfilment out of playing live as we do making the record. You get to travel the country, meet new people everywhere you go, and get the opportunity to kinda let it all out every night.

Music kind of makes the world feel smaller in a good way, and I think that’s what’s so unique about it as an artform.

FTR: Where does the title, Voice Box, come from? Do you think you’ve found your voice on this record? Or is it more subtle than that?

A major theme behind “Voice Box” is the stress that comes from feeling silenced. Most women, if not all of us, have experienced this in one way or another. The idea of having to suppress your anger or any emotions that are typically reserved for men is kind of drilled into us from birth. Some experiences are more overt than others, but they stick with you and slowly chip away at your self worth. “Voice Box” calls those tendencies out on their bull shit, while simultaneously poking fun at fragile male egos. I think this record was a good introduction into finding my voice, but it’s more of a confident first step than a final destination.

FTR: Who influences the music you make? Were you listening to anything in particular when you were writing Voice Box?

Each of us has their own kind of unique set of influences, but as a band, artists like The Breeders, Liz Phair, & The Replacements are where we align. They’re confessional in-your-face songwriters, but also are fuzzy, experimental, & impulsive musicians. we try not to stay tied to a specific genre & we really love how these artists make any style of music they feel like & don’t think twice about it. voice box takes a little bit from a lot of things, which is something we strive for.

FTR: These are obviously very odd times in Austin, with the cancellation of SXSW, how’s the city holding up? Do you think this will have a long term effect on the music scene there?

Obviously, folks are struggling. Most of our friends work in service and are jobless. The venues where we honed playing live are shuttered. But spirits are high & everyone we know is working on music at home, & if anything when this quarantine is lifted I think folks are gonna be even more energized to put out records, play live & go see as many shows as they can.

It’s really hard to predict the future, but if musicians, venues, and fans want it to happen (& they do by all accounts), the scene’s gonna come back even stronger than it was before.

FTR: What about personally, this is obviously a very strange time to be releasing a record, have you had to change your plans for promoting this record?

We’re playing it day by day, but the crew at Fat Possum has been immensely helpful, and fortunately folks are still able to listen to our music at home. It hurts to not be able to support the record on the road, but we’re doing our best to stay productive! We started the demo process for our next record, we’ve been sending songs back and forth, and we have a few live stream gigs that’ll be announced soon.

FTR: Once touring does resume, what can people expect from the Why Bonnie live show? Have you been able to rearrange any dates people can look forward to?

We haven’t played live since January, so expect fully a re-energized and refreshed Why Bonnie. We’ll hopefully be trying out a few songs off of the upcoming record, & will probably have new haircuts. As of now we’ve rescheduled our dates with Kevin Krauter for mid-July, & should be announcing very soon 🙂

FTR: What’s next for Why Bonnie?

Keep our heads down, play tons of shows, and record our next record!

Voice Box is out April 10th via Fat Possum Records. Click HERE for more information on Why Bonnie.