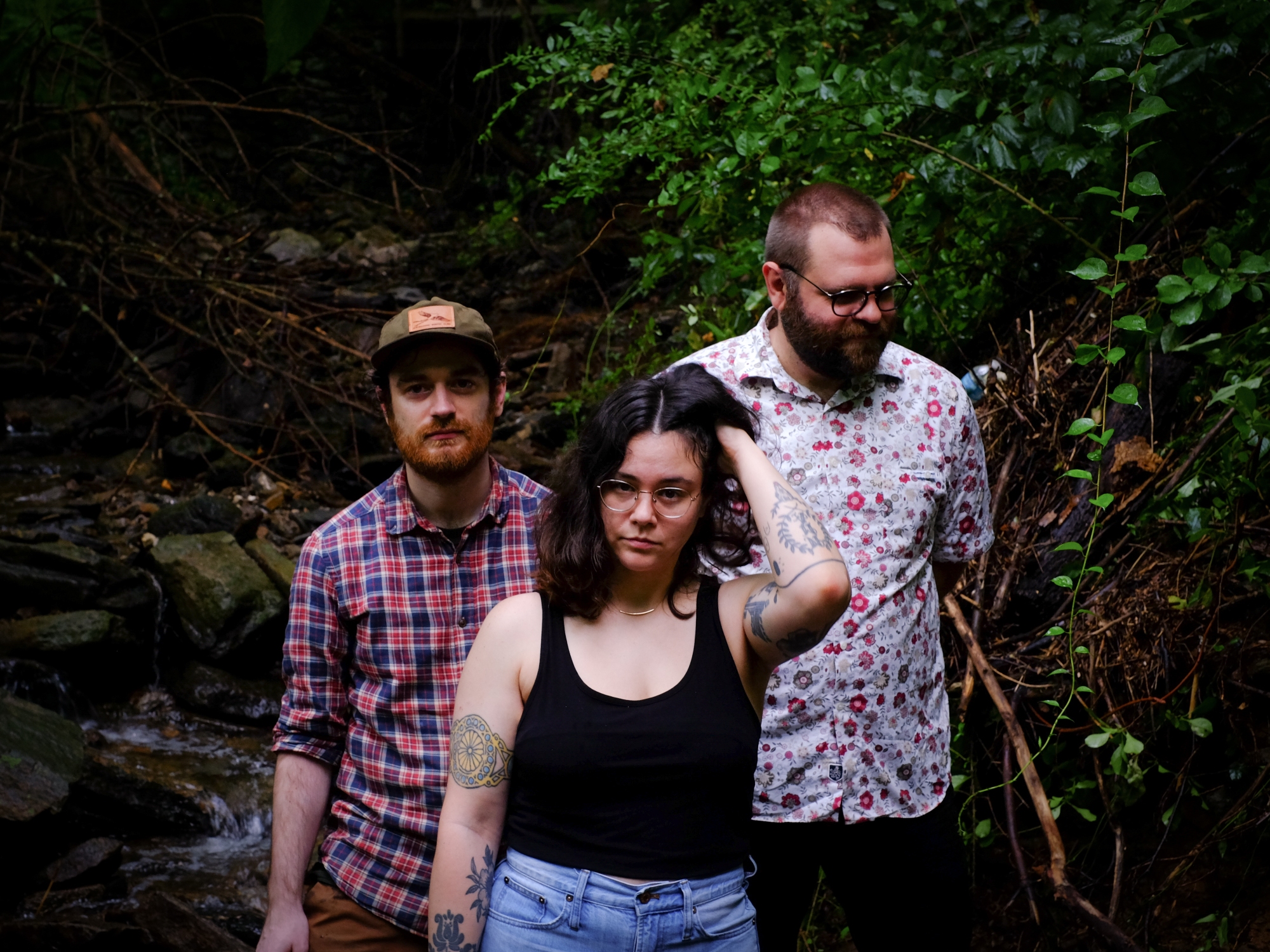 Formed in Philadelphia back in 2016, No Thank You began as, “an exercise in catharsis through punk-inflected indie rock”, achieved most successfully until now on 2018’s All It Takes To Run It All. The band’s second album, All It Takes To Ruin It All, was a raw reflection on grief, following the loss of vocalist/guitarist Kaytee Della Monica’s father. Their latest offering, Embroidered Foliage, out this Friday via Lame-O Records, in many ways looks at what happens next.

Discussing the inspiration behind the record, Kaytee notes her tendency, “to create catastrophic distractions to deter from my problems”, many of which spill over onto Embroidered Foliage, via intense relationships and her own internal struggles to break out of cycles. This emotional tumult is fittingly set to the band’s most loud and heavy record to date, the rhythm section of bassist Evan Bernard and drummer Nick Holdorf providing the perfectly muscular backing to Kaytee’s vocal howls and, sometimes riotous, guitar playing. What’s most impressive perhaps about Embroidered Foliage though is its ability to surprise; while most of the songs fall well short of the three-minute mark, they regularly branch off into surprising musical directions. Opening track, Saturn Returns, sets the tone for the album, coming across somewhere between early Waxahatchee and American Football, while the atmospheric Eden adds an eerie folkish quality and the album’s first single, Enough is a brilliant bruising slice of college rock. This is a record that doesn’t shy away from the difficult times, nor does it revel in them, for every moment of destructivity, there’s another of beauty, ultimately it’s a celebration of progress, a snaking journey that we all go on to discover the person we are.

FTR: For those who don’t know who are No Thank You?

No Thank You is Kaytee Della Monica, Evan Bernard, and Nick Holdorf. We’ve been friends for a very long time and wish we lived in the woods.

Kaytee: It was on October 18th, 2016. We played with The Sidekicks at PhilaMOCA. It was a truly inspiring experience! I played a scene from “The Office” on my looping pedal between songs during tuning. No one laughed.

Nick: We were definitely punching above our weight. I had just learned the songs since Evan recorded the drums for the first album, so I was a bit nervous. It was a blast though and ended up being one of my favorite shows that we’ve done.

Kaytee: I actually went to art school and majored in sculpture. I still do a little visual art from time to time, but music really took over for me after college. It was a fun way to spend time with my friends who were all so talented and I looked up to so much. I wanted to be like them. I also wrote a lot of poems and it became a good outlet for me.

Evan: Kaytee is an amazing sculpture artist, she graduated at the top of her graduating class at Moore. Nick makes great collages. I don’t really have an art bone in my body. I am a very loud person so it seemed right.

Nick: Music was the first art form that seemed to make sense and make me feel like it was something I could make my own.

FTR: What can people expect from the No Thank You live show?

Kaytee: We’re pretty loud. I have a habit of bad banter about being sad. I am anxious on stage, yet anxious to get back onto the stage.

Evan: It’s very loud. I miss playing shows. I hope we get to do it again sometime.

Nick: We’re usually pretty loud. Kaytee plugs into two amps and Evan loves to create a big wall of some serious bass. There’s probably an awkward pause and/or joke thrown in the mix. We say our hellos, our goodbyes and all in all it’s a nice time.

FTP: What’s next for No Thank You?

Kaytee: Experiencing the roll out of LPIII without being able to tour or play shows. I have been writing a lot, preparing for LPIV. We have been having some writing practices. That’s about it until things calm down in the world a bit.

Pedro the Lion – [All Of] Control

Chromatica is so good, and “911” is probably my favorite song on the album. I love that the music she makes is so rooted in 90’s pop. It’s super nostalgic for me. She also talks a lot about self-worth and mental health on the record and particularly this song. I love it.

Again, I love Gaga’s new album and this was an early single. I love the melody, the harmonies, the feel, the vibe. I love singing along to it.

I’ve known Greg for fifteen years and every time he releases new music it is like Christmas. “Bike” is a short little pop guy and I love it. I highly recommend his new album Cherry Hell.

Paula Cole – Where Have All The Cowboys Gone?

As I previously mentioned, I have a lot of feelings around music in the 90’s. It all definitely shaped me and influences me. I love this song and often listen to it on repeat.

I grew up loving Hello Kitty so my love for this song may be rooted in nostalgia at its core, but I also love a sonic palette featuring simple square wave sonics from 80’s video game systems combined with the modern autotune/glitch pop styles of folks in the PC Music circle like Charli XCX and Sophie. I can’t shake the vocal melody out of my head, and the lyrics “Gorgeous, girly cute, yeah I just wanna wear the shit that all the girlies do” gets me. IDK why. It’s definitely corny, but I know Slayyyter makes pop music as an escape from the real world, and I love that shit. I love that kids in their early 20’s can make shit like this on a laptop. I wanna learn how! Pop music is so cool. It’s so cool to me that instead of playing loud ass guitars and forming bands to get out your emotions, kids are making pop music on laptops.

Her new album SAWAYAMA is like a style tour of the 1990’s, from hints of Christina Aguilera and early hip hop to Nu Metal, it’s just so much fun to listen to. CDG has such a sick bassline, and the beat sounds like it’s being played through a boom box until the chorus hits. It just feels great. A big WOOO into the chorus, and at that moment the bass hits, the high end is extended, the dance drums take over, and you can’t help but allow it to take over. This song definitely has runway vibes. Her voice is killer, she can do everything you expect out of a pop star.

Caroline Polacheck – Look At Me Now

I am pretty sure “Pang” is as close to a masterpiece as anybody has come in recent years. I love the dichotomy between the cold lifeless modern pop autotuned production and a singer who absolutely doesn’t need any of it. Caroline exudes emotion in her delivery, her lyrics tug at the heartstrings. This song sits in the middle of the album and touts a rare appearance of an acoustic guitar. Lyrically it crushes you, immediately draws you in, gives you a kiss of harmonies a la Kate Bush and all the while you’d never notice it’s in 7/4.

Tomggg has this way of painting an incredible palette of sound. His music combines elements of modern hip hop and dance with what often sounds like an electronic marching band in a way I can only describe as what the Beatles would sound like if they came out today. It’s always interesting, very well orchestrated, and easy to digest. Ai Otsuka has a really unique sounding voice and has definitely solidified herself as a star for many years. Her music often isn’t my thing, but the original version of Peach boasts 12 string guitars and downbeat drums, something you’d hear the byrds or beach boys do in the 60’s. It’s an outlier in her catalogue, but it’s a great song. Tomggg was able to keep that summery beachy vibe but modernize it with his color palette. If you hadn’t told me this was a remix I would have guessed the vocals were written to the track.

Tricot is my favorite band. Over the past 10 months I have known of them I would say they have absolutely dominated my speakers. The fact that they’re putting out a second full length this year makes me so so so happy. This was the first single released, and I just can’t stop listening to it. It has such good moments of tension and release within the chord progression, Ikkyu really carries you on a journey with her melody, and every time Kida jumps in to harmonize it just pulls the song into another dimension. All of this is laid over a pretty fast, punky driving back beat. Hiro’s bass tone is always incredible (if anybody knows where I can find an akima&neos wild bass 100 outside of Japan and can direct me to it, or better yet buy it for me as a gift I would be much obliged) and her lines leave something I aspire to. I just wish I could even wrap my head around how to write music like this. It’s so close in theory to the vein of music I play and always have played, but so so so much heddier.

Phoebe Bridgers – I Know The End

An incredible end to a beautiful album.

I just recently discovered this band. The intro guitar part makes me smile.

I’ve just been listening to a lot of white noise lately. Maybe too much, Spotify started only suggesting soundscapes to me.

Rusted Root – Send Me On My Way

It’s like a ray of sunshine in song form.

Embroidered Foliage is out October 23rd via Lame-O Records. Click HERE for more information on No Thank You