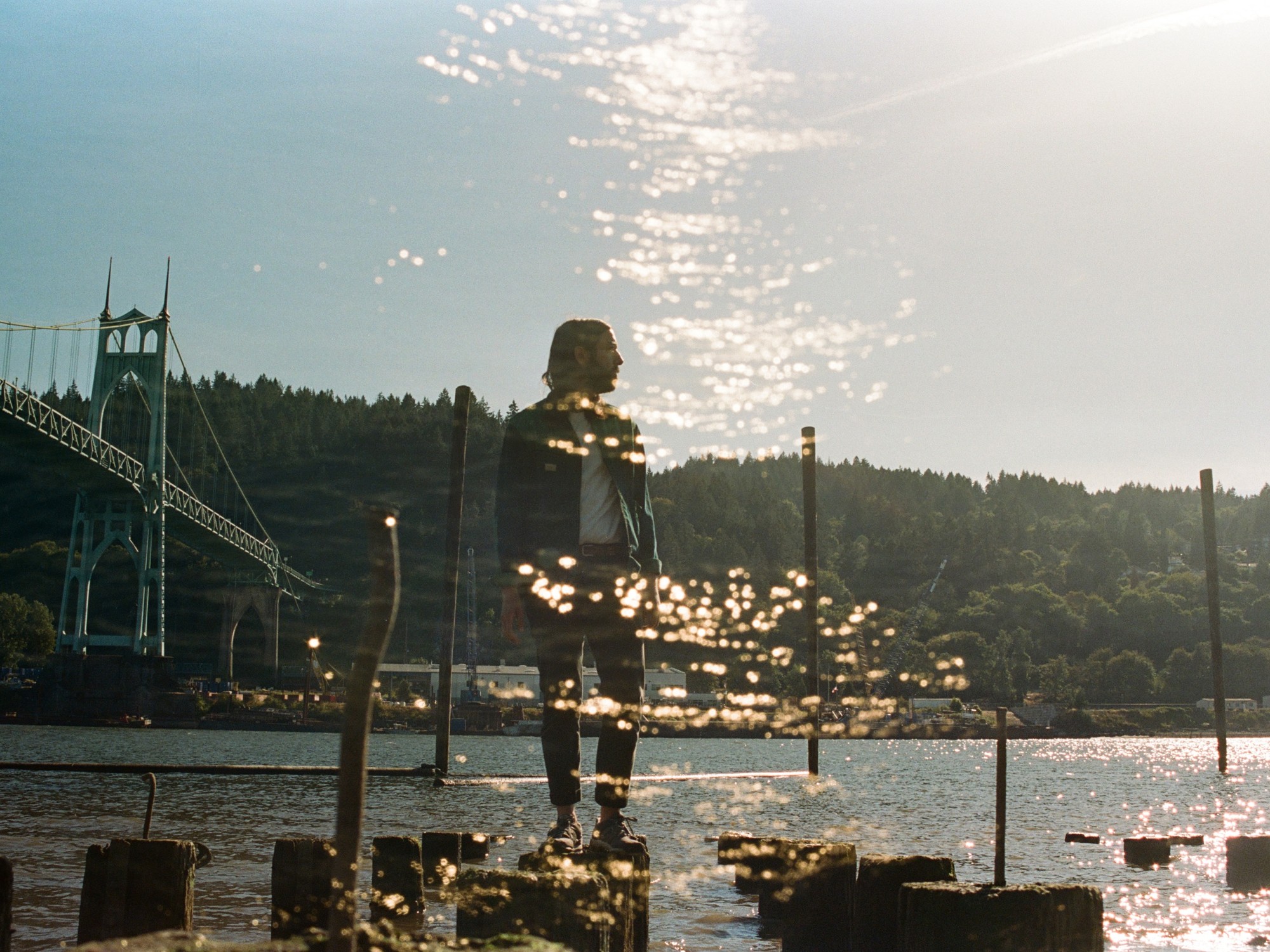 Although now based out of Portland, Oregon, as a native of New Jersey, Jeffrey Silverstein had already made something of a name for himself on the East Coast during his time playing with the likes of Nassau and Secret Mountains. Jeffrey embarked on a solo-project back in 2019 with the release of his debut EP, How On Earth, followed quickly by last year’s You Become The Mountains. Now teaming up with Arrowhawk Records, Jeffrey is set to mark 2021 with a brand-new EP, Torii Gates, its name lifted from the traditional entryways to Japanese temples.

Described by Jeffrey as, “a celebration of the unknown, small joys, and learning to be comfortable with transition”, Torii Gates is a record that seems to exist between worlds, as if standing on the edge of transcendence, as he sings on the de-facto title track, Soft Lens, “stuck outside the Torii gates, tired of hearing you have to wait”. Working again with producer Ryan Oxford, Jeffrey sets these almost spiritual musings to an array of musical ideas, crafting tracks that flutter between psychedelia and Americana, songs that float by in a beautiful trance like state, layered wonders, as vast and intricate as the night sky on the clearest night imaginable. This feels like a record full of exciting discoveries waiting to be found, each listen allowing you to dig something else out, to find the treasure lurking within and revel in the magical world that Jeffrey has created.

FTR: For those who don’t know who is Jeffrey Silverstein?

I’m a musician, writer, and educator living in Portland, Oregon. I enjoy thinking, writing, and talking about how those aspects of my identity intersect and serve one another. Grew up in northern New Jersey and spent time in Baltimore and Brooklyn before relocating to the Pacific Northwest.

Being a ‘solo artist’ is still quite new for me. In March of 2018 I was invited to be an artist-in-residence at the Sou’wester Lodge on the coast of Washington out near Astoria. The songs that came out of my time there make up the majority of debut EP, How on Earth. That experience gave me newfound confidence that I could ‘go it alone’ after many years in larger bands, duos, etc.

Since then I’ve released an LP, You Become The Mountain, done a handful of solo tours, and have just announced Torii Gates, a new EP out 4/16 on Arrowhawk Records. I also host a bi-weekly show on Dune Buggy Radio from 7-9pm PST called Felt Time. When I’m not recording/performing music I try to spend as much time as I can running, reading, and meditating. So looking forward to the return of live music.

At the end of my residency in 2018 I played my first solo show in over a decade in the lodge of the Sou’wester. It was an ideal environment (small, supportive audience) but I couldn’t have been more nervous. My set was sloppy and I was completely exhausted by the end of it. My wife recorded the audio but I’ve never been brave enough to listen back. Though I do remember thinking ‘it can only get better from here.’ So far that’s been true (thank goodness).

I say it often, but making music is how I come to understand myself and others. It’s what I’ve been most drawn to for as long as I can remember. Music has given me everything, at this point I genuinely don’t think I could stop if I tried. There are few better feelings than finishing a song – good, bad it, really doesn’t matter. Trusting and investing time in my process as a musician allows me to get out of my own way. That turns a wheel of positive energy for all aspects of my life.

FTR: What can people expect from the Jeffrey Silverstein live show?

Recently I’ve had the honor to perform as a trio alongside Barry Walker Jr. on pedal-steel and Alex Chapman on bass. That’s who you’re hearing on You Become the Mountain and Torii Gates. Tremendous players with great feel, intuition, and who really understand the concept of serving the song. When I’m alone at the microphone, it’s just me, my guitar, and a drum machine. I’ve enjoyed the challenge of how to make my set of both lyrical and instrumental tunes engaging for an audience. Feeling a bit out of practice for obvious reasons, but I have a lot more clarity on how to approach the live setting now.

FTR: What’s next for Jeffrey Silverstein?

As more positive news of the vaccine is released and the weather turns, I hope to be able to play a handful of safe outdoor shows this summer to celebrate the EP. I had to cancel an entire tour and record release for You Become The Mountain so finding a way to almost do a ‘double release’ show would feel nice. Also, I recently curated It’s So Easy (When You Know What You’re Doing): A Tribute to Ted Lucas which will be released 5/14 on Perpetual Doom. You can learn more about that project here. Will be releasing some more demos and covers throughout the year as well. Other than that I’m going to have my head down on preparing to record another LP, keeping the radio show going, and trying to take advantage of summertime adventures while I have time off from teaching.

Shannon Lay – Baby Where You Are

Alex Bleeker – Heaven on the Faultline