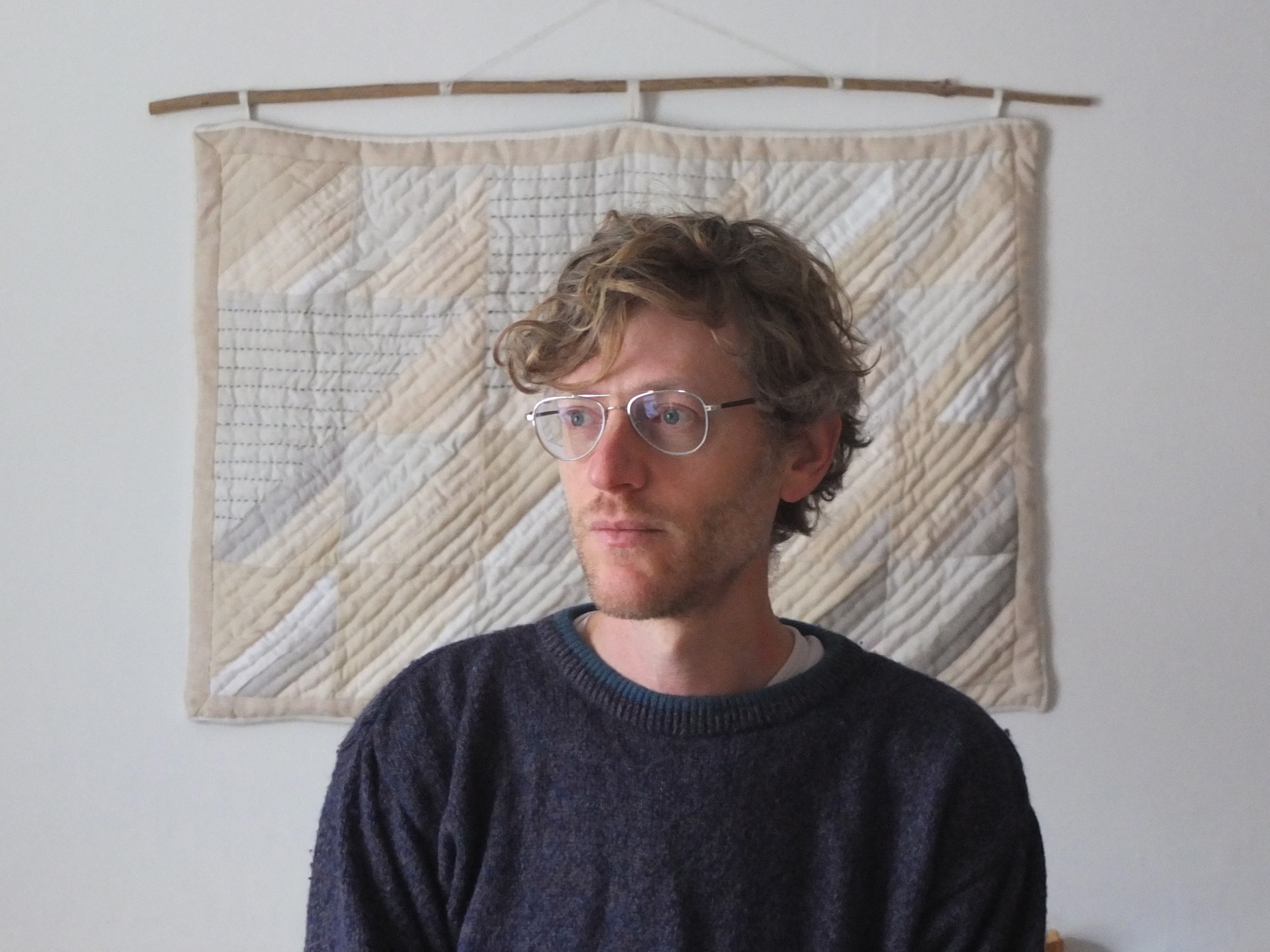 Born in Maine, Robert Stillman moved to the UK over a decade ago and currently calls the town of Margate on the Kent coast home. With seven albums already under his belt, Robert has spent the last few years in his studio, “chipping away” at the songs that would become his eighth record, What Does It Mean To Be American? which is set for release in January as a co-release between Kit Records and Orindal Records. Ahead of the release, today Robert is premiering the first track from the record, Cherry Ocean.

An eight-minute opus, Cherry Ocean is the only track on What Does It Mean To Be American? that is not instrumental. Despite the rare foray into lyricism, Cherry Ocean is nonetheless just as boundary-pushing and eclectic as anyone who knows Robert’s music would expect. Prominent sustained piano chords and Robert’s warm vocal reminiscent of Jonathan Wilson bring the song to life, before orchestral flourishes, pitched somewhere between the world’s of chamber-music and Gerswhin-like jazz, take the song spiralling into the experimental mind of this fascinating composer. As well as introducing the genre non-adhering nature of the album, Cherry Ocean also introduces us to the themes that run through What Does It Mean To Be American? This is a record that explores nationality, identity and the American dream, asking constant questions in an attempt to make sense of the complexities that are rolled up in a nationality. Despite asking the difficult questions of his home country, this is not a record that wishes to shy away from that, instead, it is a doubling-down on his roots, seeking to accept all aspects of being American, the good, and the bad. As Robert himself explains this is, “a gesture of radical acceptance of reality, that opens the space for positive action, be it personal or political, as a corrective to the inertia of denial and delusion”.

As well as the release of What Does It Mean To Be American? Robert has also announced the re-issue of his collection of minimal electric piano improvisations, Portals. Originally released on cassette back in 2017, the remastered and expanded version will get a long-overdue vinyl release. The original release is now adorned with a new composition, the strange and beautiful wonder of Portal 8 (The Stranger). You can check out the track below alongside my interview with Robert, where we discuss his recording process, why this was the right time to revisit Portals, and why “being American means taking on the work to define what that involves”.

FTR: For those who don’t know, who is Robert Stillman?

I’m a musician and composer, originally from the Northeast US (Maine). I’ve lived in East Kent, England for the past 10 years.

FTR: You’re announcing your latest album today, what can you tell me about recording it?

This album was written and recorded over a few years in my small studio in Margate, Kent. Because so much else was going on at this time, the majority of this work was made by chipping away over a long period. This partly accounts for how varied the material is in terms of style, sound quality, etc.

As with most of my recent records, all the pieces are built up from overdubs of me on various instruments, with the exception of the guitar part played by Anders Holst on ‘No Good Old Days’.

FTR: As someone who has lived in the UK for over a decade now, what does it mean to you to be American? Has living in the UK affected how you see your nationality?

My thought is that being American, or ‘being’ anything, necessitates asking the question: “what does it mean to be XX”. This is maybe particularly true in the case of national identity, where there are certain ‘givens’ or attributes that people are encouraged to take for granted. And it’s likely extra relevant in the case of being American, because the country’s history (as the USA) is relatively short, so the identity is still arguably very malleable. What I’m saying here is being American means taking on the work to define what that involves for each person who self-identifies as, or is identified as, American. The album artwork points to this-it’s about the process of actually looking in the mirror, being reflected and reflective: accountable.

Living in the UK has affected my sense of being American, because I’m identified this way more often than I would be at home, if only because of my accent. I get a perspective here on what people think America is. It was interesting to see that, particularly during the Trump presidency, people’s attitude to me was along the lines of, “Well, you’re ok, but…”, and it got me thinking defensively- am I really exempt from all the parts of being American that I find distasteful or disagree with? I certainly give myself permission to challenge certain ideologies that I don’t share; there are lots of different ways of doing this. But to try to completely excuse myself from the parts of politics, culture, and history that I don’t identify with doesn’t work, because as a product of America, I’m in some sense a product of it all, not just the parts I like. Just to be clear: this is about accepting, which is different to condoning. But if I’m approaching aspects of Americanness I see as destructive as if they are a part of me, then surely there’s even more incentive to engage positively in changing these things, because it’s me that needs changing.

FTR: You’ve shared Cherry Ocean today, what can you tell me about the track?

I guess the most remarkable thing about this is that I’m singing, which is unusual for me. When I was composing this, the melody came from singing- without words. Transferring the melody to an instrument didn’t really work, so I decided to write some lyrics and sing it on the recording. The lyrics were more or less written unconsciously. Using lyrics and singing is all new for me, but it’s a good challenge, and a good opportunity to feel exposed.

FTR: You’ve spoken of What Does It Mean To Be American as an album of, “radical acceptance”, how did that manifest in your creative process?

In a couple ways- I did very little self-editing in terms of the kind of material that I ‘approved’ to make the final cut of this album. There are certain tracks, like ‘Self-Image’, for example, that don’t really fit my idea of what kind of music I make. Normally I wouldn’t pursue something like this past the initial stages of composition. But in this case everything kind of got a pass on the grounds that most of those ideas about what ‘fits’ are ego based and superficial anyway. If these songs came out, they’re an expression of some senitment or insight on my part, and therefore I want to validate them

My recording process is usually open to quite a bit of ‘imperfection’- and in this album, I opened that up even more. I deliberately moved very fast with the recordings and mixing, and generally avoided trying to fix things that are almost always ‘right’ somehow in the first place anyway. It seems to me that a lot of production technology these days is geared toward perfection, and that’s cool but so far that’s not for me. My favourite recordings show vulnerability on some level or another, so I’m taking a lead from those right now.

FTR: As well as your new album, you’re also reissuing an older record, Portals. Why was this the right time to go back to that record?

We’ve been kicking around the idea of a vinyl pressing of Portals for a while, but Richard Greenan from Kit, who is releasing these records in the UK, suggested it, and the time seemed right. Orindal has a sold a surprising number of Portals tapes, and people have told me this music has helped them feel centred, relaxed, or whatever, which is why I made it in the first place. These days there are plenty of reasons to try to centre ourselves so maybe the time is right to bring this one some new life as an LP.

FTR: How does Portals fit into your back catalogue? Is it a record you’re particularly fond of?

It was something I did between other things, with no intention of releasing it: recording these pieces was something I was doing to focus myself at a particularly chaotic time- I had this slot between 10 and 11 pm every night when I’d record something on Rhodes while everyone was asleep. Most of my other music has some element of repetitive or minimal form, but this music just happens to distill that down into the main approach.

FTR: Both records are coming out as co-releases between Orindal Records and KIT Records, how did that come about? Do you think labels are still important in the digital age?

I suggested this after Richard from Kit suggested re-releasing Portals on vinyl; Owen (at Orindal) and Richard’s approach to running a label is very similar- they are both artists themselves, both are avid music lovers with extensive knowledge of all kinds of music, and both are very organised and creative in their approach to releases. They are also both my friends. I see people self-releasing albums with lots of success, so I know it is possible, and probably easier now than before the internet and digital music. Personally I feel extremely grateful to be working with Orindal and Kit-not just for the platform they’re giving my music, but also because I trust their creative perspective on things.

FTR: Do you have plans to take this record on the road? What can people expect from your live show?

Yes I’m planning on performing as much as I can next year- whether or not it will actually include material from these albums, I’m not sure. My live set right now is solo, using saxophone and some effects pedals, tapes, and a little keyboard, and it’s usually improvised. Ideally, elements of things I’ve written and recorded can make their way into this set in a more or less subconscious way.

FTR: What’s next for Robert Stillman?

I just shared an audio-visual piece called ‘Unseen Forces’ that allowed me to be installed in the gallery space playing music for three days straight; people could just wander in and check it out, and leave- this has suggested a new kind of ‘performance that is really appealing to me, so I’d like to do more of that, in different locations.

I have a radio show on an internet radio station here in Margate, and I’ve been posting recorded improv sets every month since the pandemic began. This has been a great practice for me, and I’m going to keep doing that, and staying open to how that hour slot can evolve, ideally to include other people we’ve got in our little community here.

I also have another album coming out in the summer with a collective project I’m a part of called Bog Bodies- we’re spread across three countries which has made it tough to play together, so I’m hoping circumstances line up to make it possible for us to get busy again in 2022. Besides that, I’m going to stay engaged as usual in my little studio trying to keep learning what it’s all about!

What Does it Mean to Be American? and Portals (2022 Reissue) are both out January 21st via Orindal Records (US) & KIT Records (UK) For more information on Robert Stillman visit https://robertstillman.com/.