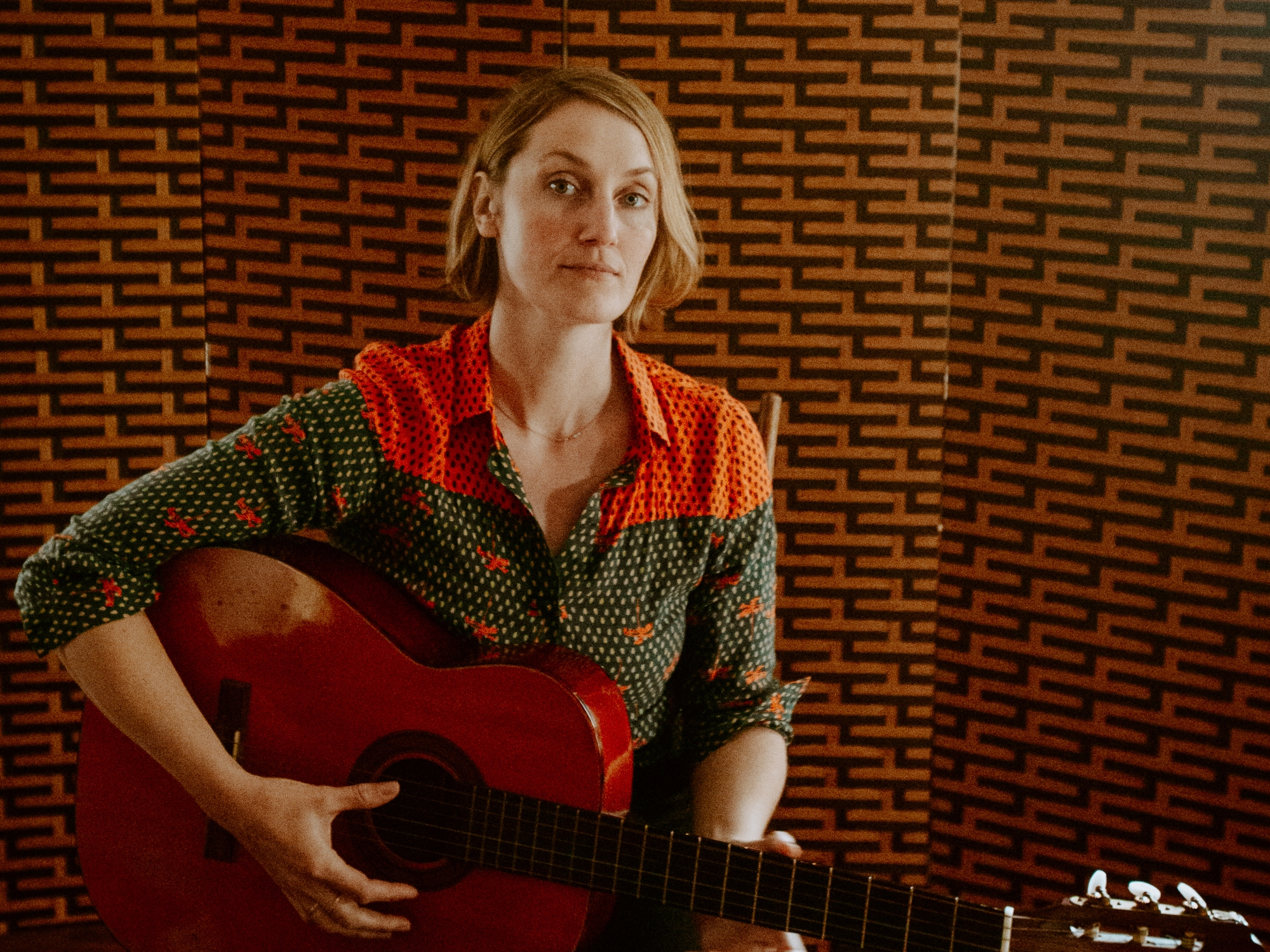 5. Field Guides Get In By The Skin Of Their Teeth

The musical moniker of Brooklyn-based songwriter Benedict Kupstas, Field Guides first caught my ear back in 2019 when he released his brilliant second album, This Is Just A Place. Music is just one element of Benedict’s eclectic CV, which has taken in everything from horseshoe crab monitoring to bottling whisky, and that mixture of both nature and humanity are threads that run through all his music, stitching it into a tapestry of his own making. Three years on from This Is Just A Place, Benedict has this week announced the upcoming third Field Guides’ record, Ginkgo, which will be released via Whatever’s Clever In June. Alongside the news, he also shared the first single from the album, Salmon Skin.

While much of Field Guide’s music is rooted in the nature Benedict has spent his life surrounded by, Salmon Skin takes influence from further afield. The track is inspired by a period Benedict spent in Lebanon when he was struck by “geographical and psychic displacements”, and the sense of confliction that comes with life’s, “dizzying forks in the road”. A rarity for Ginkgo, the track was recorded pre-pandemic, and as such features the Field Guides band together playing live in the studio. The resultant track is a hypnotic affair reminiscent of The Acorn or TŌTH, as twin vocals drift amid an ever-changing forest of instruments, with the guitars joined at different times by saxophone, pulsing bass and fluttering percussion. If the music is delightfully subtle, so too are the lyrics, as Benedict sings, “I called you across continents, not considering the cost”, nodding to a less overtly pained take on the distant romance so perfectly captured by Transatlanticism-era Death Cab. Field Guides’ music is always something to be cherished, they make landscapes to explore, paths to follow, trails to traipse at your own leisurely pace, Ginkgo’s journey might only just be getting started, but I’m already excited to see where Benedict is going to take me next.

Ginkgo is out June 24th via Whatever’s Clever. For more information on Field Guides visit https://fieldguides.bandcamp.com/.

4. Advance Base is A Shining Light

Owen Ashworth has been sharing music as Advance Base for a decade now, starting back in 2012 after hearing problems brought about by the end of his acclaimed electronic pop project Casiotone for the Painfully Alone. Focus in recent years has shifted to his other role, as the indie music mogul behind the brilliant Orindal Records, and the world hasn’t heard an album of original material since 2018’s Animal Companionship. After spending lockdown recording his love song to the Karaoke communities of the world, Wall of Tears & Other Songs I Didn’t Write, Owen has recently announced a string of dates with labelmates Karima Walker and Claire Cronin. Although it has been a week of ups-and-downs for Advance Base, with the sad, but understandable, postponement of their UK tour originally plotted for this month, which will now take place at the end of the summer, there was better news with the release of his brand new single, Little Sable Point Lighthouse.

Described by Owen as, “another Advance Base song about grief & wonder & living”, Little Sable Point Lighthouse is a song of fictional characters, and a very real Lighthouse, situated in the lower peninsula of Michigan, near the town of Mears, although now decommissioned. The lighthouse itself plays a key role in the story the track tells, which focuses on two days in the life of the lead-character Elise. Aged 28 she heads to a hotel with her boyfriend CJ, they holidayed in a cabin, “went swimming, drank beer and watched TV”, until CJ, sleepless, snuck out to the lighthouse and was never seen again. Years later, Elise happens upon Little Sable Point Lighthouse, a place of nightmares now passed into, “a calm that surprised her”. Musically, the track is a classic Advance Base cut, as the steady pulse of the drum-machine is cocooned in a wave of rich, subtle synthesisers, atop it all stands Owen’s gentle half-spoken vocal, like the middle ground of Bill Callahan and The Magnetic Fields’ Stephin Merritt. It’s fitting Advance Base returns not with a bang but with something rich, gentle and emotionally long-lasting, one of music’s great storytellers here welcomes us back into his world, asks us to draw up a seat and opens his book once more.

Little Sable Point Lighthouse is out now via Orindal Records. For more information on Advance Base visit https://www.advancebasemusic.com/.

3. Horsegirl Are Cooking Up A Storm

Horsegirl were one of my picks for 2022, and I was definitely not alone in that, as the Chicago-based trio are quite possibly one of the most hyped bands on the planet right now. Described by the NME as, “the champions of SXSW”, the buzz around the band shows no sign of slowing down as they build towards the release of their debut album, Versions Of Modern Perfection, out in June via Matador Records. As well as announcing their first-ever European dates, this week the band shared the latest track to be lifted from Versions Of Modern Perfection, Worlds Of Pots And Pans.

Described by the band as, “the first love song Horsegirl has ever written”, World Of Pots And Pans was written on the eve of the band’s first tour, and spins Gang Of Four’s track Damaged Goods on its head as they sing, “sometimes I’m thinking that I lust you, but I know it’s only love”. It’s not the only reference within the track that shows Horsegirl’s knowledge of alternative music’s past, at various moments they conjure thoughts of Sonic Youth’s distortion, Yo La Tengo’s tenderness and Wilco’s ability to make a song appear out of the noise. While they’re lofty comparisons for a band this early in their journey, they also do Horsegirl an injustice, for all the memories they trigger, they’re a band carving their own niche, once they’ve lived through all the buzz and hype, there’ll be a special band left to make something very special with the pieces.

Versions Of Modern Perfection is out June 3rd via Matador Records. For more information on Horsegirl visit https://thisishorsegirl.bandcamp.com/.

Although currently based out of Berlin, Nicole Faux Naiv was born to former Soviet parents in the small German town of Olpe. The twin influences of German and Soviet culture are writ large across Nicole’s debut album, Moon Rally, which was released last week via Bronze Rat. Ahead of the album’s release, Nicole recently shared the latest single from the record, Tomorrow Was A Summer Day in 2001.

Described by Nicole as a song, “about the ambivalence of memories”, a reflection on how the past manages to live on inside of us, as she sings, “tomorrow was a summer day in 2001, it may be great outside but in my mind, the sun illuminates the past behind”. Nicole sets her reflections of memories to a suitably nostalgic musical backing, all metronomic drum beats, and twinkling synths that wouldn’t sound out of place on an indie Christmas cover. The whole thing is prevented from sliding into pure pastiche by the clarity of Nicole’s vocal, which combines the charm of Francoise Hardy with the world-weariness of Beach House’s Victoria Legrand, as she hints at the difficulty of rejecting the past’s sickly charms, “I used to prefer sunsets, to enter the night, but lately I like to see her rise ’cause beginnings are often prettier than endings”. There’s a collage-like approach to the music Nicole Faux Naiv makes, picking fragments of memories and pasting them next to musical ideas, capturing a feeling as she references an influence, the resultant canvas is complex, beautiful and just the right level of odd to keep you coming back for another glance.

1. Joan Shelley Will Really Spur You On

A folk-musician based out of Louisville, Kentucky, the world last heard from Joan Shelley back in 2019, when she released her acclaimed seventh album, Like The River Loves The Sea. In the Spring of 2021, whilst Joan was seven months pregnant, she went to Earthwave Farm in the Kentucky countryside, and, alongside producer James Elkington, recorded the songs that would become her eighth album. Featuring collaborations with the likes of Bill Callahan and Meg Baird, the album will see the light of day this summer via No Quarter, and ahead of its release Joan has this week shared the sparkling title track, The Spur.

Recalling the gestation of The Spur, Joan recalls the track came from a “period of opposite extremes”, inspired by the duality of, “intellectual hyper-connection and physical isolation”, which came with the joy of parenthood and marriage during the darkness of the pandemic. The track opens in a traditionally psych-folk fashion, as Joan’s richly hued vocal joins the complex push-and-pull of the finger-picked guitars. From there though The Spur is a track of delightful surprises, from the increasing presence of the buzzing organ to the distorted fuzz that slices through the outro. In the album notes for The Spur, Joan references a line by the novelist Wendell Berry, “make a poem that does not disturb the silence from which it came”, that’s exactly what Joan’s music seems to do, it enhances the calm, adds to the tranquillity, takes nothing from the thought just enhances its clarity. Joan Shelley might in her own words be, “a bird on a branch echoing others”, yet it’s a special talent that echoes them so well that for a moment you feel like you’re hearing these sounds for the very first time, Spring has just sprung and Joan Shelley might just have written the season’s perfect entrance music.

The Spur is out June 24th via No Quarter. For more information on Joan Shelley visit http://www.joanshelley.net/.