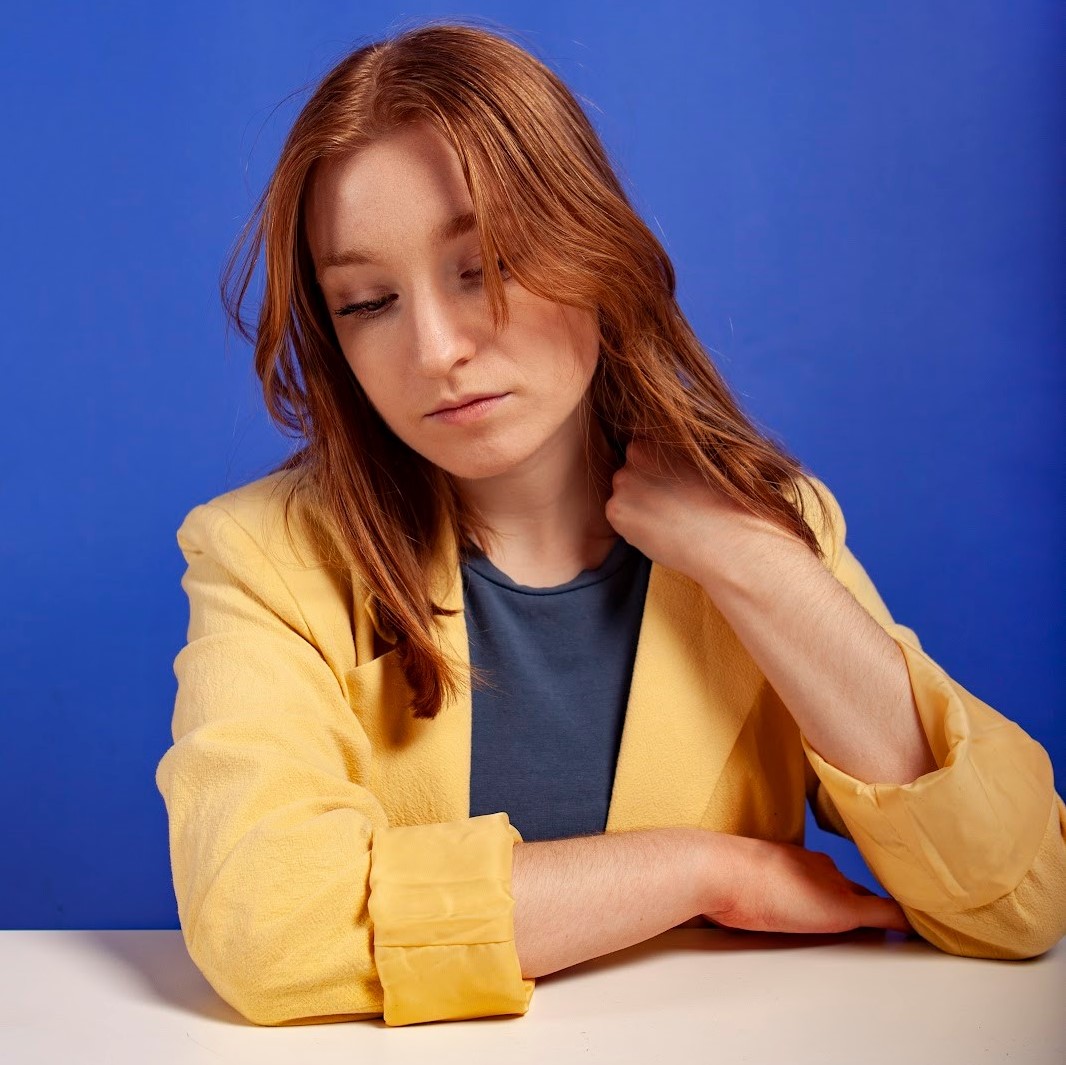 A songwriter based out of Norwich, Kitty Perrin is possibly as well known for her support of other musicians as she is for sharing her own material. A presenter on BBC Radio Norfolk, which yes does conjure up some strong Alan Partridge vibes, Kitty presents both a show discussing local youth issues and the station’s BBC Introducing show highlighting the up-and-coming bands of her home county’s music scene. The community spirit created by her show is also apparent in her own musical vision, finding both inspiration and collaboration in the creative people around her. This all plays out in her debut EP, Stick It Out, which is out tomorrow.

Kitty introduced the world to Stick It Out via the single The Escapist, a song about the end of a relationship and the joy we can take in denial, as Kitty reflects on the importance of taking responsibility for your own role, even if the other person did handle things badly. Musically, it was a set to an ambitious slice of indie-folk, resplendent with rich piano runs, stadium-sized booming drums and Kitty’s straight-talking vocal, “staying well away from devotion, leave them to fuck up at their own pace, I’ve been playing the victim”. More recently Kitty shared Nothing Bad About Me, a song that walks the line between deeply personal and fictitious, as she rails against controlling behaviour and being constantly told how you should feel and behave, as she notes, “if you feel angry about something, chances are you deserve to be angry”. The song takes on a subtly different musical pallet, as the warmth of the rippling, almost retro-sounding keyboards entwine with languid guitar lines and Kitty’s increasingly raging vocal, peaking as she sings, “you took away my strength and I can’t get angry”, before giving way to an almost jazzy instrumental section. The song departs on layered vocals, and the gently crushing conclusion, “I think I’m the wrong kind of yours”. There’s something triumphant about Kitty’s music, her ability to take her own experience and transform it into something collaborative and communal, Stick It Out feels like Kitty throwing the curtains wide and offering a warm welcome to anyone willing to step inside and explore.

FTR: For those who don’t know who is Kitty Perrin?

I’m a singer-songwriter based in Norwich, UK. I write songs as stories, often using real moments and interactions from my life to explore a bigger issue or feeling. My music is best described as indie-pop. I learnt to play and write listening to great folk singers alongside 00s pop stars and I think you can hear that overlap in my music which combines that folk-style storytelling and big chorus’s.
Alongside my own music, I work as a Radio presenter for BBC Radio Norfolk on a youth show called ‘The Social’ and the BBC Introducing show, which supports new and emerging artists. As a result, I am really involved in the local arts and music community and it feels like a huge part of who I am. I spend most of my time going to local gigs and hanging out in pubs around Norwich.

Depends what you count haha. The first memorable performance of my own original music was when I played at a concert with all the schools in Brighton aged 11. All the other schools sang hymns and classical pieces. We sang my original song – and Katy Perry’s firework! But it obviously sparked a passion for it because that was the first song I’d ever written and I haven’t stopped since.

That’s a question I have never thought about! I’m obsessed with music, I have been since I was tiny and there are very few moments in my day where I’m not listening to music.
I think songs say a lot more to me than any other art form, and I love how someone else’s songs can feel so personal that you feel like you really know the artists behind them. So I guess a lot of it is about wanting to connect with people.

I also like how the music can take the focus off what you’re actually saying. I like to write songs about difficult personal situations to work them out, and it feels safe to do that in music because if people relate to the lyrics they’ll become the focus, but if they don’t they might still like the tune. That’s my experience with the music I listen to anyway.

A more cynical reason is that I’ve always sought out opportunities to be in front of an audience. So maybe making music is just a symptom of being a middle-child haha!

FTR: What can people expect from the Kitty Perrin live show?

You can always expect me and a guitar, often joined by my amazing band with bass, drums, guitar, keys, the occasional Vocoda, and lots of harmonies! We just completed our first headline tour and had so much fun that right now I’d say a Kitty Perrin show is normally 5 people playing sad indie-pop music looking like we’re playing ABBA. You can also expect a radio presenter level of on stage chat and storytelling.

FTR: What’s next for Kitty Perrin?

At the moment, I’m just going to continue to write, record and play as much as always. I hope to play around the UK more in the next year. We’ve just started playing our first shows outside of Norfolk and it still blows my mind when people in other cities turn up. Right now I’m just so excited to have music I’m really proud of out in the world for the first time.

Kitty Perrin · Nothing Bad About Me

On Sunday afternoons my dad would always play guitar and sing in his room for a bit and me and my siblings would often join him. This song was in a chord song book he would always play from called ‘The Essential Acoustic Album’ featuring Lou Reed, Leonard Cohen, Dido, Elvis Costello and Suzanne Vega. When I first started playing guitar, my dad lent me the book and I learnt by playing along to these songs, so they all feel like a huge part of the music I make today. This is my favourite song from the book. I love the way the whole song is just one fictional conversation that tells you so much, and I’ve tried to replicate that conversational style in my own songs.

Marika Hackman’s album ‘I’m Not Your Man’ came out just after I came out when I was 17. She was always a big inspiration for me, and hearing her singing grungey, indie-pop songs about women with her folk-style vocals was a bit of a revelation. I moved away from fictionalised folk songs, and started writing honest songs about things I knew and cared about. It also opened my eyes to the fact that women could play other genres!

Slow Club were the first band I ever really discovered for myself. My best friends older cousin introduced me to them when I was in primary school – and they became a bit of an obsession for us. I went to my first gig Slow Club gig when I was 11 and went to see them countless times during my teens. Watching Rebecca Taylor (now Self Esteem) playing drums on stage was probably the biggest driving force for me getting into music. You can’t really help but want to be her when you see her live. They also introduced me to the world of indie music, allowed me to become part of a scene of new music lovers and I discover so many other bands.

Phoebe Bridgers and Connor Oberst are two of my favourite artists and if anyone ever asks me what my favourite albums are, Better Oblivion Community Centre will be one. There are so many reasons I love it but ultimately the lyrics in their songs are just so phenomenal. I love the way this track it’s so literal and blunt in parts, but so poetic at the same time, using mundane scenes to offer beautiful insights into the world and human interactions. I also love how this song pulls you in so many different directions.

I think Julia Jacklin is such an incredible story teller! This song basically just recounts events scene by scene but in the most visceral way, you feel like you are watching it all play out. She has a way of writing that is so personal but so relatable. Plus her voice is absolutely stunning. There’s that wavering, folky quality but also a real grit and power to it so it always sounds like she’s about to either laugh or cry.

Stick It Out is out May 6th. For more information on Kitty Perrin visit https://linktr.ee/KittyPerrinMusic.

One thought on “Get To Know – Kitty Perrin”