Special days like the first day of End Of The Road call for special posts and special guests. We’re delighted to say we’ve got both here today as one of our favourite bands Horse Thief join us to discuss lyrics, influences, life on the road and a whole lot more.

Horse Thief’s debut album Fear In Bliss came out earlier in the year on our favourite label, Bella Union, and instantly established itself as a real album of the year contender. Taking influence from Americana, folk, rock and pop, it sounded like a complete history of American music, but it also sounded delightfully fresh and entirely forward glancing.

Lyrically, it explored a huge variety of topics, tackling tough topics from anxiety through to death and a complex relationship with religion. This latter topic struck me as I re-listened to Fear In Bliss’ closing track, Warm Regards. Cameron sings “Your jesus is a lie, my jesus told me so, told me magic isn’t real, but pretend until you die” it’s typical of him as a lyricist, as he discusses below, his delivery and words are open and honest, tackling universal issues, and never being afraid of being too honest if it results in connecting with the listener.

The band return to our shores this week, not only for a show on Sunday night at End Of The Road, but also to tour with the like-minded Felice Brothers. You simply must catch this band, as they demonstrated supporting Midlake earlier this year, they’re an unmissable live prospect, and their set in the Ti-Pi Tent on Sunday evening, will surely be one of the festival highest of highlights.

IN THEIR OWN WORDS – HORSE THIEF 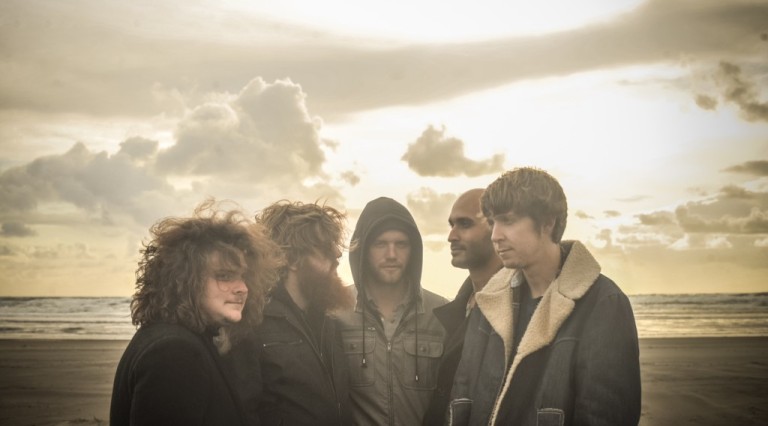 When writing the lyrics for Fear in Bliss, or any song, I try to get a grasp
on something that is universal to the listener as well as something that speaks close to myself. During the writing of Fear in Bliss, I was personally struggling with anxiety and wanted to capture that feeling through the lyrics on the record. I wanted to use them as a way to get it out of my head, make it real, as well as try to give a sense of comfort to the listener in a time that they may have been struggling with similar feelings. Music is universal, and I try to design lyrics that way. I never feel that it’s exposing too much personally, but even if it did, I don’t mind. Honesty in lyrics speaks quicker and easier than writing about something I have never felt before. That’s what I go for when writing, more than worrying about who or if people will accept it.

When speaking of influences, I guess you could say I come from a different background than most of my band mates. Considering the fact that my family is from Puerto Rico, I grew up listening to a lot of Latin jazz, salsa, merengue and Bossa Nova. My father was a musician, so I was exposed to music 24/7. One of the best pieces of advice he ever gave me was to never restrict yourself to one style of music; so as I got older my ears started to open up to different styles of music ranging from folk to rock and pretty much everything in between. I think that helped me become the musician that I am today, and helped me put a little bit of my own taste into Horse Thief. Personally, one of the things I like the most about being a part of this band is the fact that we all have our own influences and backgrounds. I think it allows us to have the sound that we do, and gives us the opportunity to create something we all enjoy.

When it comes to writing and arranging our songs, we typically have two sources: improvised jam sessions and partially formed ideas. It’s usually a blend of the two, as we might start with one idea and repeat/improvise to come up with different parts for the song. Most of Fear In Bliss was conceived this way. We are all pretty analytical players to some extent (myself being the most,) and like to run the songs until we all feel comfortable with every part of the arrangement. Certain things may change slightly in the studio, but the core of the song is usually worked out in a live setting. We like to let songs play themselves out over time, as we’ll work a few new tunes into our live set to try them out and see how they feel in front of people. Ultimately, the songs must pass our personal approval before we let them out into the world. We’re too picky to settle for mediocrity.

My favourite aspect of touring is being able to do what you love every day, while travelling around the world with five of your best friends. It really doesn’t get much better than that, in my opinion! You have your good days and your bad days, just like any other job, but at the end of the day, we still feel like a family. Another upside of touring is getting to meet all different kinds of people from so many different walks of life. I love hearing people’s stories of their culture, musical background, and hobbies. We’ve made a ton of new, life long friends with fans, crew members, and the other bands we’ve been out with within the last year we’ve been travelling, and for that I feel very blessed.

Music, in my opinion, wields an incredible power in its ability to affect your world, whilst using only one of your senses. As a musician, music is experienced on so many different levels, and I feel honoured to be able to witness this force through multiple senses. Music becomes something you can touch, something you can see, as well as hear. There’s no experience like having, and hearing, an intuitive and emotionally reciprocated conversation with someone, without having ever opened your mouth. The four other musicians in Horse Thief are men I know better than anyone, personalities I’ve come to understand through conversations that outnumber the amount of words we’ve spoken to each other. As we speak to one another, we also speak to the listener, giving them a glimpse into that moment of our lives, using a language that needs no translation. Music is the only language that every person is welcome to take their own meaning from, while still being able to feel the intention of the source. Our live performances are very dear to me, as it is the most direct way we can communicate what exactly Horse Thief is to the audience, and it is always fascinating to learn what feelings we inspire in others.

Fear In Bliss is out now on Bella Union. The band play the Ti-Pi tent at End Of The Road on Sunday evening, and then tour the UK with The Felice Brothers, including a date at London’s Forum.