We arrived at the campsite on a windy Thursday afternoon and set about pitching our tent. Above us we saw two rather majestic looking Macaws swooping across the pale blue sky, above one of the many wooded areas of Larmer Tree Gardens, home as ever to this years End Of The Road. Behind us are the perfectly green, rolling hills of the West Country: it is as idyllic a setting for a festival as one could possibly hope to encounter. The people who have set up camp around us are a neat summary of the people who attend End Of The Road: to one side a slightly older couple, who start one morning by making Bloody Mary’s complete with Worcester Sauce, Tabasco and Celery Salts; they discuss the line up enthusiastically, wide eyed adventurers looking for discoveries. To the other are a group of pure music fanatics, bands are discussed in minute details, the day meticulously planned to see as many bands as possible and ensure that nothing worth seeing is missed. The third group arrive a little later and camp their tent pretty much on top of us to the point where a guy-rope outside our tent is a constant trip hazard, and we’re met on numerous occasions by a late night drunk apologetically collapsing into the side of our tent. They seem to see the line up as an after thought and are here largely to drink cider, take copious amounts of mood-enhancing drugs and “feel the vibe” of the festival. Somewhere along the line the tastes and interests of all three groups fall together in a neat Venn diagram with a field near Salisbury and an infamous cider-bus at its centre.

Thursday is something of a bonus evening. A handful of bands, previously unannounced play in the festivals smallest stage, the Tipi-Tent. The atmosphere was an expectant hum, people largely milling about; walking the site, seeing what new food stands have arrived, The Cheese Truck, serving basically cheese in every form imaginable, was a personal favourite. The bars did a predictably roaring trade in real ale, with names like Beer! and The Usual, seemingly named purely to confuse the bar staff. The entertainment for the evening was a suitably mixed bag; Mammút provided slick Icelandic rock music with some lovely harmonies, which, if not entirely original was very pleasant. Menace Beach were a more exciting prospect, a band we’ve been meaning to catch for a while. They roared through a splendid set of tracks lifted from both their excellent debut album Rat World, and their upcoming Super Transporterreum EP. They seemed as delighted to be here as most of the crowd, and as the tent was full to bursting with potential fans; why wouldn’t they be? Last up are Palma Violets, something of a fixture of the festival as they also played a couple of years back, but we can’t say we’re entirely sure why; their take on fairly laddish post-Libertines rock-music doesn’t seem a particularly logical fit, and whilst in their defence they drew a huge crowd, it’s just not all that interesting, and after a couple of tracks we drifted off in search of something more interesting, and settle on a Gin & Tonic and a chat by the fire, a delightful way to ease into the weekend we’ll sure you agree.

Friday started with a bacon sandwich ordered from a red double-decker bus, which we must admit does sound a little odd. We walked past a peacock in a tree, which drew as large a crowd as some bands, and past a large bear made of straw wearing a party hat, which at one point might have looked quite friendly but quickly turned rather ominous: where were we walking? Why to the Garden stage to see Ryley Walker of course. Illinois based Ryley is something of a favourite of Uncut magazine; a sure-fire way to guarantee a good crowd at End Of The Road, and as usual Uncut are absolutely correct. Joined by an impressive band, Ryley ran through an excellent set of prog-tinged folk; there are shades of Pentangle, The Band or perhaps early My Morning Jacket. Ryley also won our best description of the countryside of South-West England of the weekend award with the memorable, “this shit looks like Led-Zeppelin sounds”. A perfect hazy way to start the festival, from probably our favourite discovery of the weekend. From Ryley we headed to the Woods stage, and to an entirely different American singer-songwriter, in the shape of Nashville’s Andrew Combs. Andrew is country with a capital C: which allows us to play an enjoyable came of country-music cliché bingo along with his set, Women Done Me Wrong TICK, Whisky TICK, Troubles TICK. Despite not being the most original, it was certainly very enjoyable, and in the excellent track Too Stoned To Cry, he has a song that’s delightfully inappropriate for the amount of children around us, and all the better for that.

Shortly after, we headed back inside The Tipi Tent to see possibly the hardest working musician of the weekend, Meilyr Jones. The former frontman of the much-loved Race Horses, played not just this set, but a set at the piano stage in the (actual) woods, and a late night “secret” set back in this same tent as well. We were reminded of the work of Euros Childs, which was weird because we then noticed Euros was stood right next to us, luckily we weren’t with anyone so didn’t say it out loud. Meilyr is a very entertaining stage presence, coming across like the Welsh love-child of Jarvis Cocker and Bobby Gillespie, while musically there’s shades of Field Music if they’d been listening to considerably less prog-rock. Feeling like we’d probably seen enough male solo-artists for the day it was over to the Woods stage to see Mackenzie Scott, aka Torres. Mackenzie seemed to have borrowed Perfume Genius’s outfit from last year, which had they not been a year apart could have been awkward. She seemed, understandably given the large crowd that assembled, a little nervous during the early moments of the set and the levels are a bit all over the place, her voice a bit lost beneath the music, but gradually everything clicked into place, and the quality of her songwriting and in particular her dextrous and beautiful vocals were allowed to shine through. With her songs packing a strong emotive punch, her set became one of the weekends first, did you see that moments. 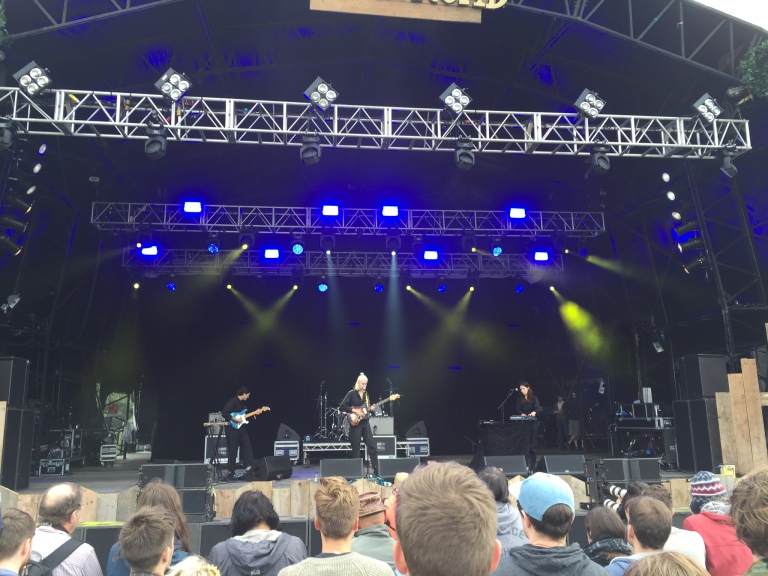 The problem with a good festival line up is the inevitability of clashes, and the first painful decision of the weekend came in the shape of Natalie Prass and Metz. We chose to split our time between the two, which as you can probably imagine was a rather jarring change of pace. Natalie’s gorgeous country-soul sound, was considerably stripped back, the strings and horns of the record replaced by a more traditionally band set-up. Luckily this just allowed the songs more room to breathe and arguably they sound even better than on record, not least because Natalie’s a wonderful performer, clearly borrowing some stage moves from Jenny Lewis, whom she used to sing backing vocals for. We cut short a lovely time with Ms Prass, and headed into a dark, sweaty tent with the incredibly loud, shouty-hardcore of Metz. The Toronto Noise-Rockers race through a series of brutally loud track, accompanied by a suitably in-your-face light show, it was very enjoyable, but you do feel a bit like you need a lie down afterwards!

After a short pit-stop to recharge post Metz, we headed over to the Woods stage to half-watch the last few tracks of Django Django. We’ve never been huge Django Django fans but we must admit they’re a whole lot of fun, so fun in fact we begin to regret choosing Singapore Noodles over bands, they even threw a saxophone breakdown into the mix, which is surely the sign of a band having a really good time. As they departed we wondered into the wooded area; home to the comedy, literature and arts part of the festival. It’s also home to the light-up dancefloor next to a pirate ship where we found the DJ playing Taylor Swift and proceeded to break into an impromptu mass dance-along, with the most unlikely looking group of Taylor Swift fans you’re ever likely to see; who knew middle-aged men with beards had such moves? It’s arguably the days highlight, sadly the DJ followed it with Kylie Minogue, and all his hard won DJing momentum was gone and like everyone else present we departed, and headed back to the Woods stage for tonight’s headliners.

Apparently it was the first time Tame Impala have headlined a UK festival, which is rather surprising if we’re honest. The Australian psych-pop brainchild of Kevin Parker, are a band that we completely forget how much we enjoy on record, are even better live. Incredibly slick, with a huge light show and far more hits than you realised. Tracks new and old were greeted with rapturous applause from a receptive audience, and despite occasionally leaving you wanting them a little rougher around the edges, they were utterly at home headlining a festival this size, they even made us like recent single ‘Cause I’m A Man, which we had previously thought was dreadful and now can’t stop singing. Well played Tame Impala!

It was over to the newly expanded and outdoor silent-disco next for some cheap late night thrills and sing-alongs; which led to some questionable moral decisions about whether it’s okay to listen to The Spice Girls when the other option is Joy Division or not? We’ll leave you to make that decision yourself, plenty of people seemed to think it was!

Join us tomorrow for part 2 of our End Of The Road Review.