Think back to 1997; Labour are riding the crest of an economic boom all the way into Government and the anthem of the day is D-Ream’s Things Can Only Get Better. Music is arguably at a creative peak: Blur release Blur, Radiohead release OK Computer, Nick Cave & The Bad Seeds release The Boatman’s Call. Music is varied and exciting, who says great music comes out of great hardship?

Fast forward with us now to 2009; the banks have crashed and Westminster has been rocked by the expenses scandal. This should surely have been a time of rebellion, a time for exciting dirgy punk racket, and exploration into where modern protest music can fit into the politics of the day. The music, however comes in the shape of upbeat, and largely uninspired folk crossovers in the vein of Mumford & Son’s and minimal electronic-pop in the vein of The XX. In these modern times people seemed to want a form of down-beat escapism that was, with the benefit of hindsight, kind of dull, who says great music comes out of great hardship?

It is perhaps only now, some six years on from that creative low, that we’re starting to climb out of the musical nadir. People are now bringing ambition and a sense that we can be angry about our lot. We can turn our instruments up, and thrash our guitars and pound our drums. It doesn’t all need to be tasteful music for dinner parties. It can be a riotous explosion of sound. Young bands can express their dissatisfaction with guitars and drums, not just retro-synthesisers and banjos. Bands like Waxahatchee, Girlpool and Joanna Gruesome are giving guitar music a makeover and showing that in 2015 it’s still as relevant to be loud and shout your problems to the world, as it was when The Sex Pistols, Nirvana or Bikini Kill did it in years gone by. Perhaps it just takes time for great art to come out of great hardship? 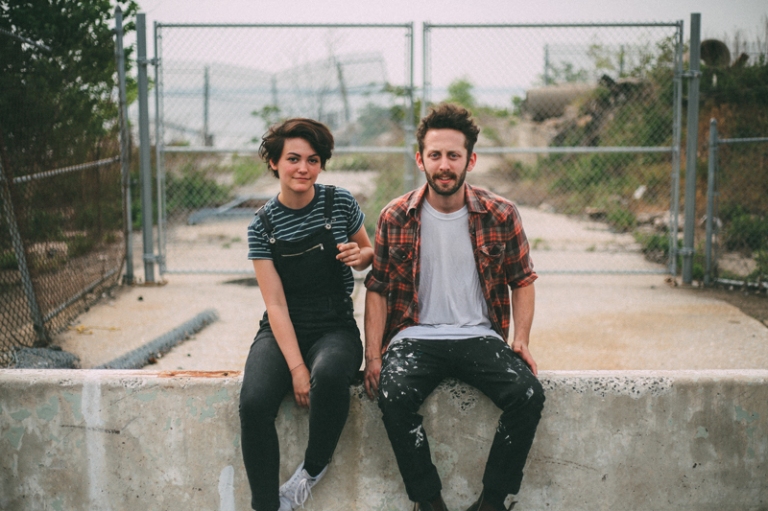 Who?
Diet Cig are singer and guitarist Alex Luciano and drummer Noah Bowman.

What?
There is little complicated about Diet Cig’s sound, based largely around Alex’s ringing guitar chords and punk-inspired thrashy breakdowns and Noah’s simple, solid drum beats. A sound that’s equal parts Saves The Day and Pretty Girls Make Graves, and transports the listener back to turn of the century American College-Rock. Alex’s lightly affected-vocal has a similar twang to the Crutchfield sisters or labelmates Sports’ singer Carmen Perry, and suits the music perfectly.

Where?
Diet Cig are from the town of New Paltz in New York State, which rather confusingly contains a village also called New Paltz. Located about eighty miles North of New York City, New Paltz takes its name from a district in Germany where the French Huguenots, who founded the town, migrated to America from, having previously fled France due to religious persecution. Diet Cig are arguably already the town’s most famous band, but it does have some other noteworthy residents, boxer Floyd Patterson went to school in the town, American entertainer Sandy Duncan lived in the town, and they can also attempt to claim Willem Dafoe, thanks to a holiday home near the town.

When?
The exact date of Diet Cig’s forming has so far eluded us, but the excellent tale of how it happened has not. Alex, desperate for a lighter, interrupted Noah’s other band, Earl Boykins, mid-set. As Diet Cig put it, “no lighter was found, but a friendship sparked.” They released their debut five-track EP, Over Easy, in February this year, and have just released its follow up in the shape of new double a-side single, Sleep Talk/Dinner Date.

Why?
Alex’s lyrics, that fluctuate from light-hearted to emotionally complex in a matter of a few lines, are a consistently excellent source of intrigue. On Dinner Date she explores complex family relations, from having, “the lamest date to the Daddy-Daughter dance” to her Mother’s questionable advice about not buying vegetables. The tale takes a darker turn as she voluntarily seeks out hospitalisation because, “everyone’s family when you’re in a hospital.”

Sleep Talk is a more classic exploration of a questionable relationship. Over ringing guitar chords Alex openly notes, “I can’t play instruments very well and I’ll eat all of your cereal” before she envisions going to the person in questions girlfriend to tell of their dalliance. There’s a great moment of release as the track breaks down in a squalling punk racket, before the whole track takes a turn for the heartbreaking. Alex’s voice takes on a softer tone, as like so many people who’ve been in her situation before her, she realises the damage it is doing to everyone involved, including themself. The track closing with her repeating the line “if I told you I loved you, I don’t know who it would scare away faster.” It’s one of the most exciting singles of the year.

Why Not?
The vocal tone won’t be for some, and ruminations on the difficulties of growing up is hardly new lyrical ground. For many though, Diet Cig will either transport you back to your youth, or if you’re young enough, soundtrack it.

The Sleep Talk/Dinner Date 7″ is out now, a joint release between Father/Daughter and Art Is Hard. Diet Cig are currently on tour in the US.