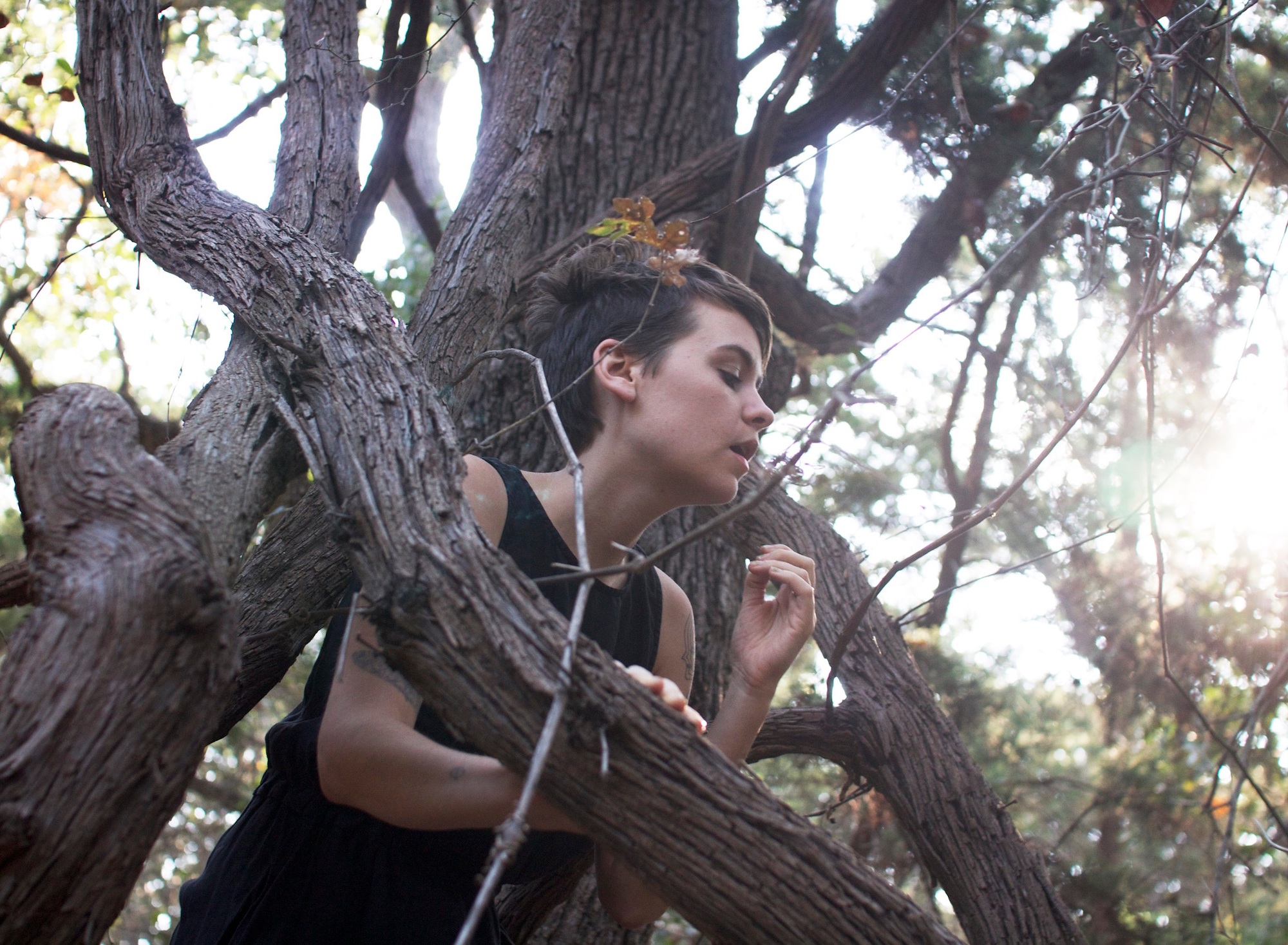 Emily Cross is the singer and main driving force behind the band Cross Record. At the end of January they will release their second album, Wabi-Sabi through Ba Da Bing Records, home to Jenn Grant and former home to Sharon Van Etten and Beirut. Ahead of that release Emily was kind enough to  sit down and answer our questions. The release of a new album is always a nerve-wracking and crucial moment for any artist, but as we spoke to Emily about it she seemed remarkably relaxed about the prospect. We asked her what her aspirations for the record, and whether she believed music was a viable career anymore, “I like to say I don’t really think about it that much, I do think about it but I don’t think about it too seriously, I would love to make music for films and just kind of stay at home and do that”. When so many musicians struggle to make a living on the constant grinding cycle of touring and recording, perhaps more will decide like Emily that, “I don’t really feel like hustling any more”.

Emily lives with her husband and musical collaborator, Dan Duszynski in Dripping Springs, a mid-sized Texan-town located just outside Austin. Emily describes it as having, “a lot of kids, a lot of families and a lot of old people, so it’s basically like suburb type of vibe”. It’s not perhaps that obvious a place to find a pair of young artists attempting to find their way in the music industry. Emily was originally based out of Chicago, we ask how she came to be in Texan-suburbia, “I had moved from Chicago to Maine, just because I was sick of Chicago, and I was just dating Dan. Then he came over and proposed to me, so we figured it was probably a good idea for me to move back to Chicago with him and save up money for the wedding, but my stipulation was that if I married him we had to move away from Chicago, because I was just sick of being there. The violence and the weather is just too much for me and I wanted a change, I gave him pretty much freedom to pick wherever he wanted to move, because he didn’t want to leave Chicago and I felt kind of guilty about that.” Dan’s career as a sound engineer has previously taken him to Austin, while their shared desire to be surrounded by nature took them out of the city.

Whilst now seemingly happily settled in Dripping Springs, Emily’s life is also linked to our own British isles, her father was born in Camberley in Surrey and she still has family in Southern-England. Her musical career also owes much to a period spent on Irish soil, it was in Ballyvaghan, Ireland, whilst on a study-abroad trip from her college in Chicago, that Emily was first convinced to sing, “I met this guy there named Jimmy, he was also studying art, but he was also a musician and he was recording part of his record there on his computer. We didn’t have much to do in the little village so we would all help each other with each others little projects, so he asked me to sing on this one song of his and I had never sung before. I didn’t really want to do it, but I did it and people seemed to respond to it, so while I was there I just was experimenting with making songs and singing. I got to sing by myself in these big castles, experience natural reverberations and spend a lot of time by myself out in nature singing. It was a good time for me.”

It’s perhaps these early experimentations that have often caused people to mistakenly see Cross Record as a solo project, “it’s very collaborative” Emily explains. For their latest record Wabi-Sabi, Emily considers Cross Record to be herself, and husband Dan, although she also heavily credits Theo Karon for his contribution to the record. We asked her about the writing process, “sometimes I don’t have anything more than the lyrics, and a sort of overall mood that I want it to be, then we just work on it together. So it’s different every time. Honestly there’s no normal trajectory, it’s just kind of a big creative process, I don’t have a set way of doing it”.

The record was entirely recorded at the couple’s Moon Phase Ranch, as was the recent video, which featured Emily performing what the press release describes as, “awkward body contortions that become alien dance moves” she also throws in the presence of a chain-saw for good measure. It’s very clear that she considers the music, video, and art behind the band to be all part of a collective whole, “different expressions of the same thing” as she neatly summarises it.

The upcoming album Wabi-Sabi, is a fabulous collection of varied and intriguing ideas, one of the key elements seems to be the contrasting of the sometimes loud, and dense music with Emily’s lighter vocals. Whilst we both agree that fragile isn’t the right term, it’s a factor she admits was considered, “I love heavy music, but particularly live, if you’re all heavy you can end up swallowing the voice, and the voice is the most important thing to me. That was a very conscious figuring out for us, how to be heavy and light at the same time and that also plays into ideas that I like, like polarising ideas, heavy and light, dark and light”.

This last concept seems to tie into the idea of this album as a piece of art, we asked about her inspirations, “inspiration comes from everywhere of course, but I’m inspired by nature, some poetry and artists, art is a huge inspiration for me, it’s a big part of my life, visual art is really big for me”. She also admits to not actually listening to that music, “I don’t actually listen to that much music in my daily life, but I like world music, and different weird sounds”. That lack of following musical ideas and trends flows through this record, it seems to exist separate from current musical trends, sometimes combining styles that seem somewhat unlikely into something that sounds unlike any other bands currently making music.

The title of the record is intriguing, Wabi-Sabi, pronounced apparently with a short a-sound, is a Japanese aesthetic idea, “it’s kind of vague, I watched this documentary recently about it, it’s like this guy running about asking Japanese people what it means, and it’s hard for them to even explain, because it’s so ingrained in their culture, but it’s the idea essentially that there’s beauty in imperfection. That’s what it boils down to, like a handmade piece of pottery with it’s imperfection and flaws, because it’s handmade and you can tell it’s handmade that’s why it’s beautiful and you should celebrate things that are messed up about it”. We asked if that applied to the record as well, “I like that about music, that you can have freedom and improvise and just let that be, or just have one take of something and just let it go and be okay with the things that you’re not so happy about, and we did that a lot with the record; we also did the opposite a lot, I would make Dan start over a song like four times, but it’s all about balance”. It’s an idea that almost seems to tie into punk ideology, even in music as far removed from the sound as you could imagine. This record may sound meticulously put together, but it’s also dotted with the energy that only embracing every mistake as a step on the road to greatness can achieve.

Whilst Cross Record haven’t yet released their second record, Emily explains they’re already thinking about starting work on the next one; but not before she goes to visit her father who’s on the verge of a move to Thailand. The plan is to spend some time in Asia and hopes to pick up some inspiration and new ideas along the way. Whilst it’s not something she’s expecting from the release of Wabi-Sabi, with an album this good, Thailand might well not be the only country Cross Record end up visiting in the coming years.

Wabi-Sabi is out via Ba Da Bing Records on January 29th.

One thought on “Cross Record – In Their Own Words”