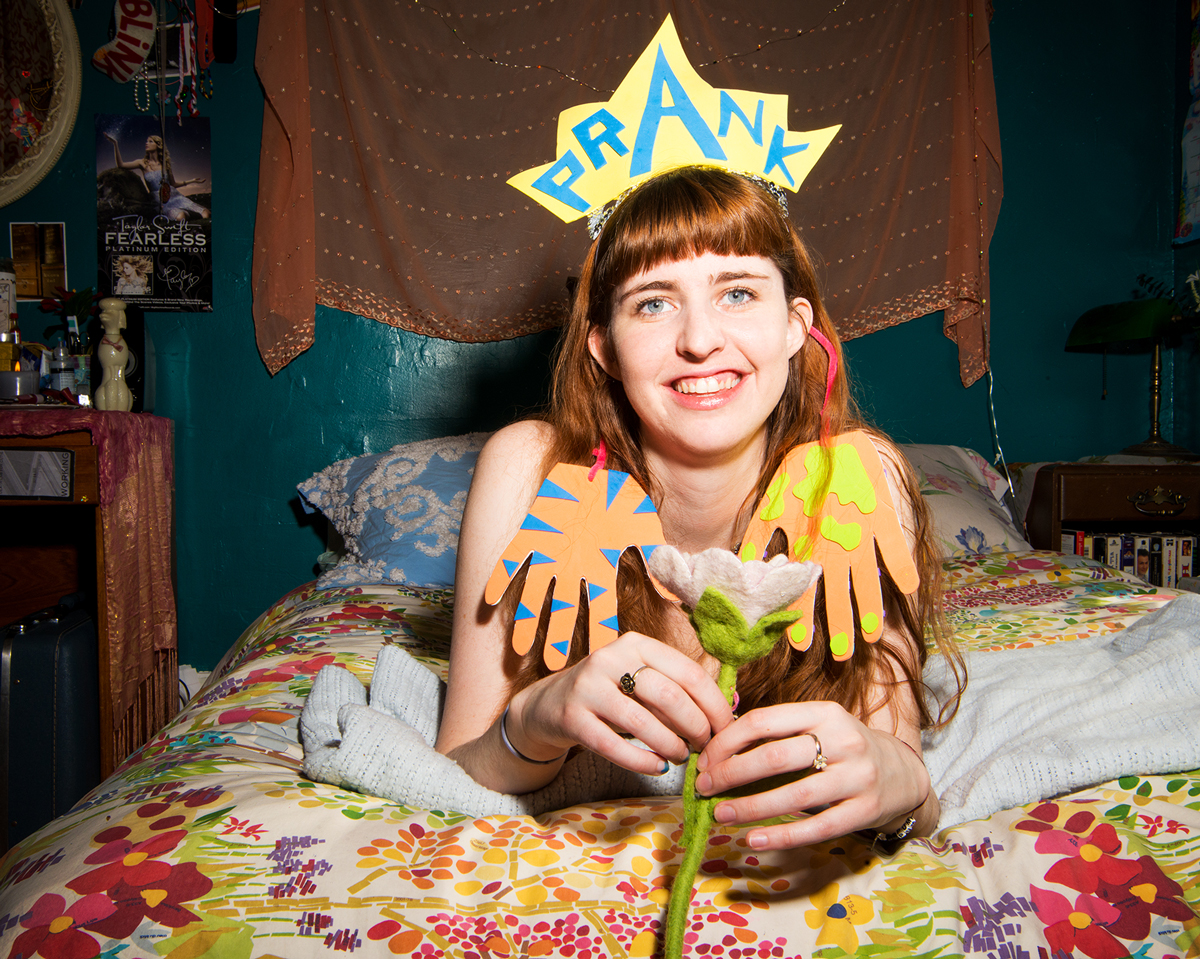 Who?
Lisa Prank is, slightly confusingly, the solo project of Robin Edwards. According to her press release Lisa Prank is a, “one-woman pop punk powerhouse”, and we would entirely agree with that. Her debut album, Adult Teen, was recorded with Tacocat’s Eric Randall and features guest appearances by Bree McKenna and Emily Nokes of Tacocat, Julia Shapiro of Chastity Belt, and Andrew Sullivan and Ian Dugas of The Trashies.

What?
For the most part the sound on the debut Lisa Prank record is down to just two items, a Roland MC-505 drum machine, and Robin’s thrashy, pop-punk influenced guitar playing. Whilst there’s little variety in instrumentation, the songwriting is considerably more flexible, taking in elements of Coleen Green like Indie-Pop, Ramones inspired garage-punk and more than a hint of Blink-182’s earlier output, Take It All in particular transports us back to the heady summer of approximately 1999.

Where?
Lisa/Robin is from Seattle in The Evergreen State, Washington. Seattle is home to nearly 700,000 people, making it the largest city in both the state, and the Pacific North-West as a whole. It is also one of the fastest growing cities in the entire US. Seattle has such a fine music scene that we seem to be talking about it rather regularly, but some news facts about Seattle for you include: it was the first US city to play a Beatles song on the radio, Seattle has more houseboats than any other US city, and Seattle is only topped in the glass blowing stakes by the island of Murano near Venice. There’s loads of great bands from Seattle, from Fleet Foxes to Modest Mouse, there’s also Pearl Jam, take that reference however you fancy.

Why?
There’s something delightfully simple about the music on Adult Teen, take opening track, Starting Again. A drum machine, some driving chords on an electric guitar that latterly explodes into a rush of brighter, and more over-driven guitars, add a nonchalant vocal over the top, and you’ve pretty much got the Lisa Prank sound done. The trick is repeated regularly throughout the album, with just enough variety to keep you entirely enthralled.

Lyrically too, it’s a record that doesn’t deal with much in the way of wasted energies. The word’s are meticulously drafted to achieve a relatable and universal persona, she might not even exist outside of this record, but Lisa Prank feels like a long lost friend. For the most part Adult Teen is an album that deals in the workings of the heart; but it’s not all pained heartache and introspective longing, sometimes, as on Baby, Let Me Write Your Lines, she wittily pokes fun at the whole idea that women are just led by doomed romanticism. Recalling a particularly hot but brainless squeeze, she notes “I stick my tongue in your mouth to keep the words from tumbling down” before cuttingly concluding, “behind your long hair hides a waste of time.”

Elsewhere on the very Ramones-like, Best Of Everything, she chastises herself for not appreciating her lot, “I’m never satisfied with anything you give to me.” While a number of tracks, Starting Again (“I swear I don’t still miss you, I just started again”), Jumper (“you said it wasn’t right did you mean it? I told you I agreed and now I wish I could delete it”) and Why Can’t We Just Dance (“I don’t want to have this stupid talk again tonight”) hint at regrets at what might have been rather than any particularly convincing heartbreak.

On a record of many highlights, we’d point you in the way of two real stand-outs. Take It All is a fabulous dissection of break-up politics, it sounds not unlike Blink-182 with considerably more lyrical chops. Whilst penultimate track, Turn It Up, is probably the album’s greatest aside, replacing the sound elsewhere with Be My Baby like reverberating drums and  a Jesus & Mary Chain or Velvet Underground jangling guitar; it’s musically thrilling, while lyrically it’s the album’s most downbeat, and poignant moment,  Robin singing, “if you’re sad you’re listening to the wrong songs and if you hear your mind the music’s just not loud enough.” It’s the sound of moving on and drowning out the voices that try and draw you down, or back, it’s also superb.

Why Not?
The lighthearted thread of pop-punk that flows through almost every song on this record isn’t everybody’s cup of tea, and with little else on offer if you don’t like your guitars spiky, your lyrics heartbroken or drum machines, this won’t be for you.

Adult Teen is out now via Father/Daughter Records, with a cassette release via Miscreant Records. Lisa Prank has some upcoming shows in the USA, click HERE for full details.