Where did you think you’d be when you were thirty? What did you think you’d have achieved? Questions that for many of our readers will prompt the response, “oi come on mate I’m not that old yet.” But for those of you who have reached the much feared landmark, you’re probably like us pondering just what you have achieved, and far more just how many things you haven’t got round to yet. You might not have got married, travelled the world or got any idea what you want to do when you grow up yet, but don’t be too hard on yourself, you won the Champions league with Wolves on Football Manager, you’ve tried far more craft beers than you ever knew existed and you’ve probably done lots of reckless, daft and sometimes dangerous things. 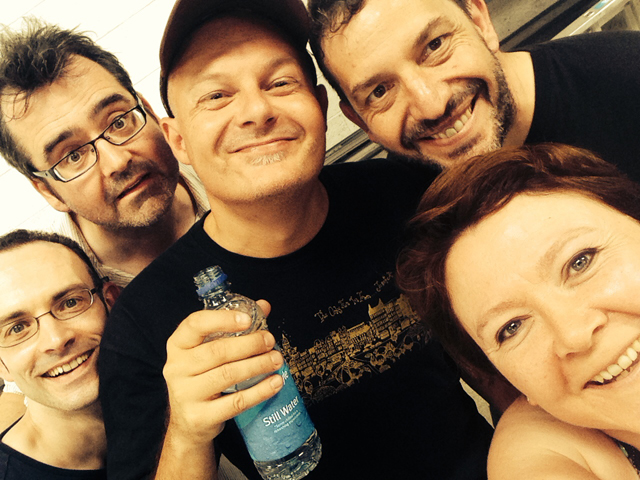 Today we’re delighted to be premiering 20 Things To Do Before You’re 30, the new single by MJ Hibbett & The Validators. In it, MJ Hibbett and his cohorts set out to dispel many of the ideas and pressures that setting yourself time specific life goals create. Ultimately the track is about being prepared to enjoy yourself no matter what age you are.

The track showcases the bands classic blend of poignancy and humour. Musically it is a delightfully raucous blast of crashing drums, driving bass and sweet violin detailing, making gentle nods in the direction of Ballboy or Jeff Lewis, with its combination of lo-fi punk aesthetics and pop hooks. Lyrically it implores the youth of today to lower their expectations and live a life of house parties, daytime drinking and giving yourself plenty of excellently daft thing to regret when later life rolls around and brings with it a life of, “eating shortbread and collecting allen keys.”

20 Things To Do Before You’re 30 is lifted from the sixth MJ Hibbett & The Validators record Still Valid, which the band self released last week, continuing their fiercely DIY aesthetic of doing absolutely everything themselves. MJ describes the record as, “a greatest hits of what we’ve been up to for the past four years.”  The album takes in various musings on life and in particularly the ageing process, via a series of seemingly specific stories. Hills And Hollows was a failed attempt to become Poet Laureate Of Peterborough, Can We Be Friends? muses on the difficulty of making friends when you’re too old for gangs and new bands, and In The North Stand is quite possibly the most heartwarming song about watching Peterborough United play football that’s ever been written. Still Valid is a sparkling return from the much loved midlands hit-makers, and one that confirms there’s plenty of life left in us all, even when our twenties are well into our past.

Still Valid is out now and you pick up a copy HERE. MJ Hibbett & The Validators have various upcoming show, and you can find all the details HERE.