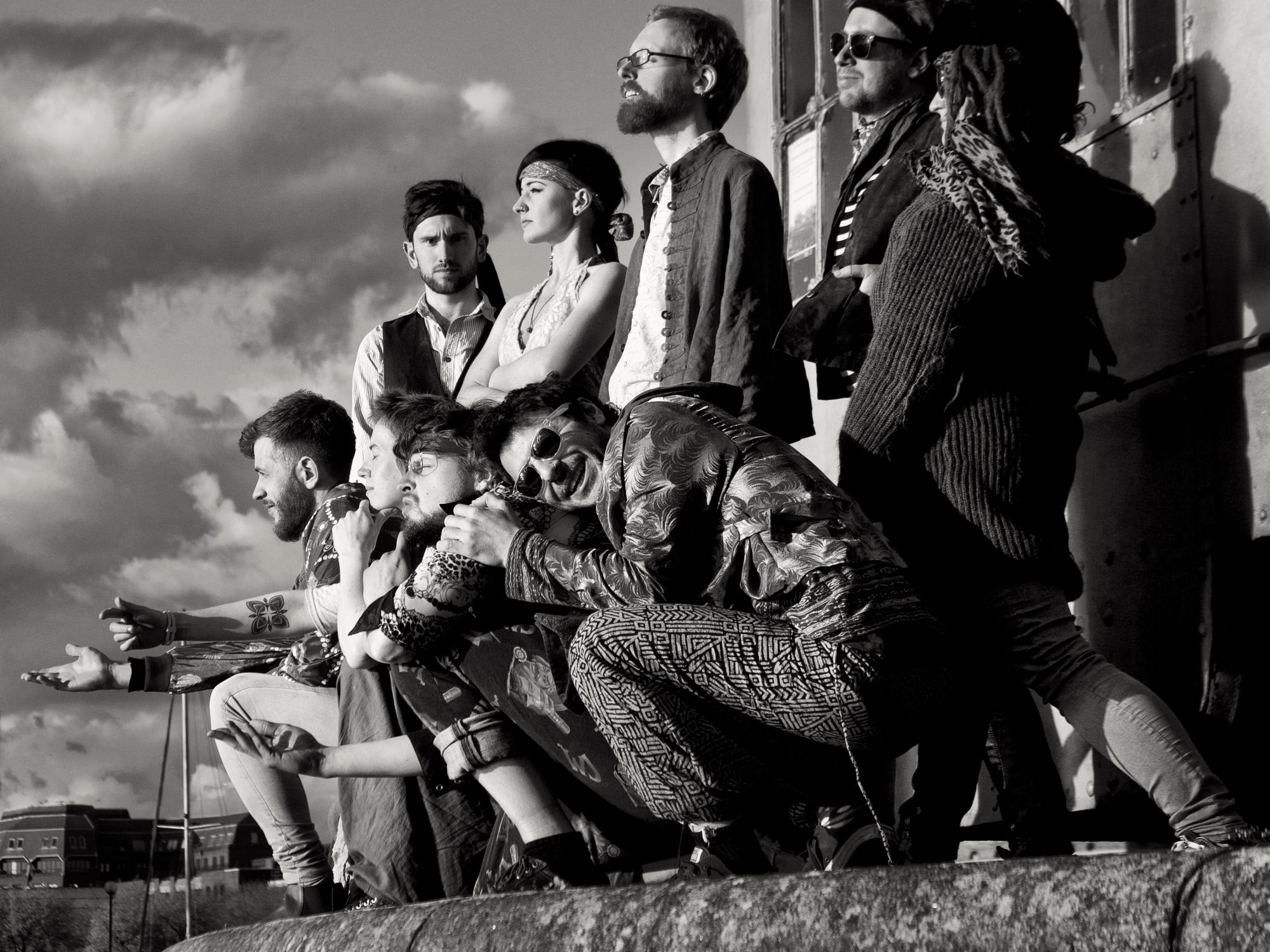 The sea, once it casts its spell, holds one in its net of wonder forever.
Jacques Yves Cousteau

As long as humans have existed, they have been fascinated by the sea. Everyone from Ernest Hemmingway to Eric Cantona has taken time to think about and discuss the power of the oceans. Human’s have been sailing the oceans for at least 10,000 years, and possibly up to around 900,000, yet somehow the sea continues to captivate artists, writers, and even prog-folk bands from Nottingham.

Seas of Mirth, are almost certainly the best ten piece, nautical party prog-folk band you’ve ever heard. Earlier this year they released their second album, Hark! The Headland Approacheth through the label, I’m Not From London. Hark! took the band away from the stomp-folk of their debut, and into the sometimes maligned world of prog. Taking the best bits; the expansive musical pallet, the pseudo-historical musings, the surreal absurdness, and ditching the overly long “movements” and almost all the drum solos. The result is a record that’s unquestionably daft, but also exquisitely crafted, varied, and at times beautiful. As they so rightly point out, “any travelled crew at sea is a cultural melting pot” and Hark! is a record that transverses the globe in search of inspiration. From the atmospheric introductory strains of opening track, The Conniving Lighthouse Sniper, through to the full blown closing party, Apocacalypso, it’s a record that takes you on a musical, and lyrical journey.

There’s plentiful highlights throughout; the exquisitely titled ode to grog, Bamboozled by Booze, the “sadly not a Weather Girls cover but does have a shipping forecast” of , It’s Raining, Men, or the the sublime title track are all worthy of mention. Best of all though is Sulphur-Bottom-Lament (Plankton Song), a surprisingly touching tale of a Blue Whale’s relationship with the Plankton that sustain it, “I am your blue doom, for alas I must consume, but all through this genocide I will be crying” The record is perhaps best summed up by a quote from one band members mother on hearing the demos, “It’s fun. Don’t think about it too much.”

When we asked Seas Of Mirth to do us a mixtape, what better place could they take us than on a journey across the high-seas. A collection of their favourite nautical noises, oceanic orchestrations and maritime metal. This eclectic tape showcases just how inspirational the big blue expanse can be, and now we’re out of synonyms for the sea, let’s get on with the tape.

Al Judders (vox/percussion/whistle): This be an early influence on the ‘Mirth, and made me want to be in a band like this. I remember going to my first gig in 2002 and they were opening on the NME tour that also featured Andrew W.K., Lostprophets and Black Rebel Motorcycle Club, and everyone was looking at each other like “WTF!!!” during this tune. This is the vital tipple to shake off the nautical nausea. Fun fact: Fellow Liverpudlian, Ian Broudie of Lightning Seeds fame produced this.

Sally Squidbusiness (keys): Whenever we’re on tour in a beach location, this always gets put on the speakers and subsequent beach fun always ensues. My favourite thing to do at the beach is dinghying! We found out about this band through Icy Demons and Man Man, who share a member or two. Gorilla Suit make awesome cartoons too – all of these name drops are worth it, do check them out!!

3. Bobby Darrin – Beyond The Sea

Robrush Featherbottom (drums): This cheeky number is an obvious choice – it’s an explosion of joyful exuberance that never fails to remind me of that time I grew up in America in the 1950s. Some years later I attended my first Big Band concert, jaw to the floor as I witnessed what happened when you stick 20 brass musicians and a drummer on a stage together. After 2 hours of swingtastic jazzledazzle all sheet music was tossed aside and on slid a very English version of Bobby Darin, who wrapped up the show with the most jubilant rendition of Beyond the Sea imaginable. This song marks the night where I discovered and then hastily retracted my dream of being a professional jazz drummer and is a reminder of how lucky we are to be able to stand on a stage every now and again and show everyone how much we love what we do.

Glen Fingle (mandolin): A classic ballad from a time long gone. I remember when I was *falls asleep snoring…*

5. Sons Of Noel and Adrian – This Wreck Is Not A Boat

6. Vashti Bunyan – Window Over The Bay

Cannonball Paul (vox/guitar): Vashti took her love of the sea to Hebridean levels, making one classic album before moving out to some sort of commune on a craggy island in the Arctic Sea. When she sang ” I wish I had a window over the bay” she wasn’t kidding. Though in reality, her bay window probably ended up being the opening of an ill-crafted yurt.

7. The Police – Message In A Bottle

Piss-in-the-wind Mindy (accordion/violin/recorder): I listen to this song on my cassette walkman sometimes, perhaps I like it so much because it reminds me of when I was lost on a desert island. Being stranded was a good excuse to get started on the hundred billion bottles of grog that I had stashed away, thinking about it that’s what probably caused the ship to sink.

Zorba the Blowfish (bouzouki): I was never a massive  fan of Hole and i can’t really recall her other songs.  But  this  tune was an eye opener to the intense, primal and powerful oppression that link both the open sea and human desire.  Of course being 15 at the time all  i was aware of was Melissa and her ridiculously amazing eyes.

Shitluck (cello): A hypnotic lapping of water upon the hull rising into a fearful storm, hear the wind howl through the rigging like voices, feel the waves crash, exploding skywards in fountains of white foam or turning inwards upon themselves. And now from the water rises the barnacled carapace of the seabeast, pummelling, tearing at the planks with its ivory beak, condemning you to the silent deep.

Rear Admiral Arse Beard (organ): Here’s a beautiful little song about fish, and about mums. Sure to bring a tear to the eye. Fuck you whoever chose Rock Lobster, how many sea themed songs are there anyway? Anyway, enjoy! *He would be completely unaware that no-one had picked Rock Lobster*

Hark! The Headland Approacheth is out now via I’m Not From London – click HERE to get your copy. Seas Of Mirth’s Autumn tour kicks off at the end of the month – click HERE for all upcoming dates.

One thought on “Nautical Noise – A Mixtape By Seas Of Mirth”