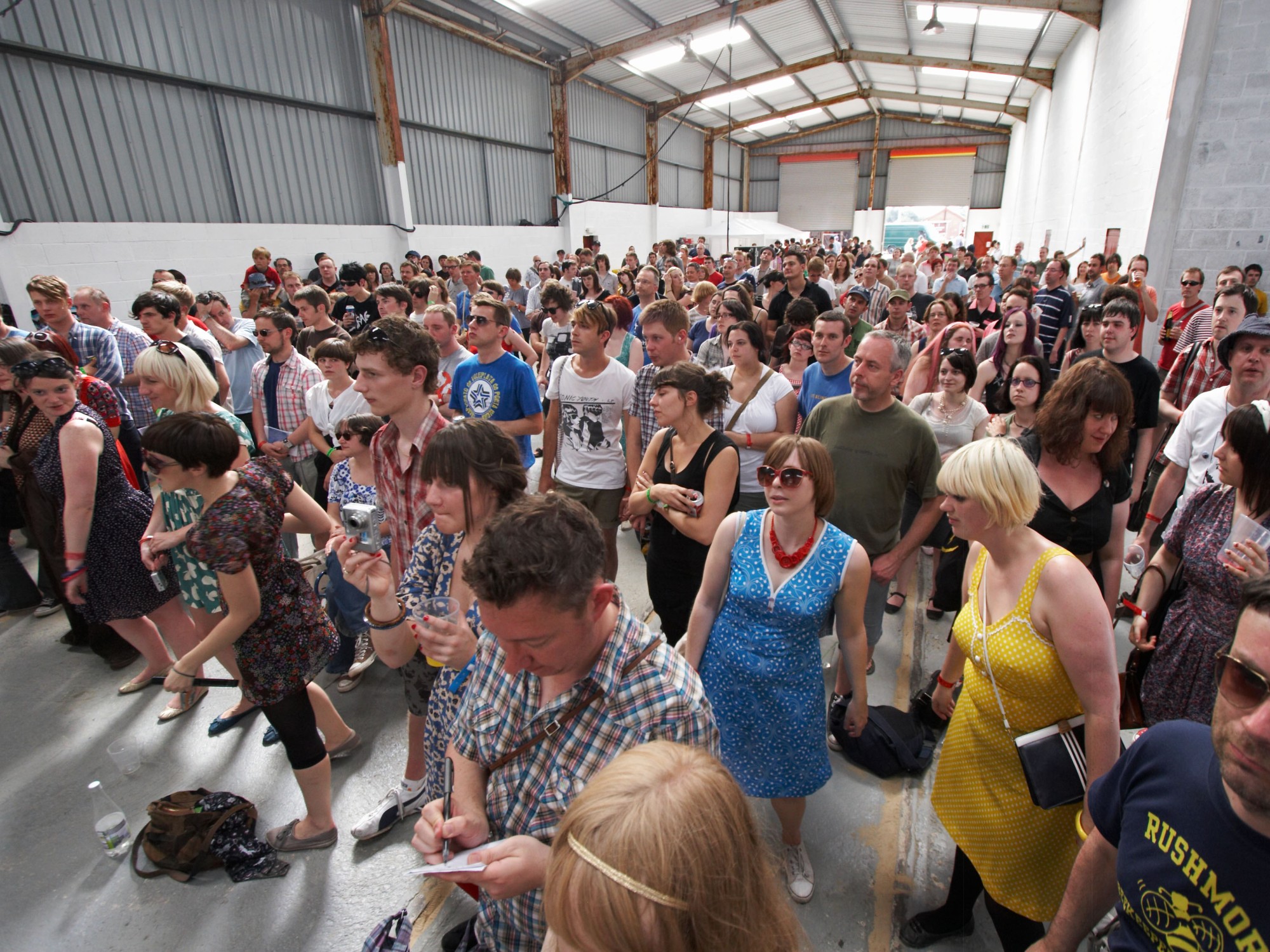 We’re just a couple of weeks away from this year’s Indietracks festival, the annual celebration of independent, creative and DIY pop music, that just happens to take place on a heritage steam railway site in the heart of the Derbyshire countryside.

We’ll be doing our annual run down of the unmissable acts at this year’s festival in a couple of weeks, and a quick run-down of the bill would suggest this might just be the best line-up the festival has ever had. Headliners come in the form of Indietracks veterans The Lovely Eggs, as well as big name newcomers Honeyblood and British Sea Power. Further down the bill you’ll discover the finest in international indie courtesy of Anna Burch, Eureka California and Amber Arcades as well as some of the best up-and-coming UK acts like Dream Nails, Sacred Paws and Life Model.

Basically, it’s amazing and you should definitely book a ticket, if however you need some further enticement, we’ve recently had a chat with one of the festival’s organising team, Andy Hudson, who runs us through his favourite Indietracks memories, exciting new discoveries and why you should definitely attend this wonderful festival.

FTR: For anyone who has not been before, what is Indietracks and why should they attend?

We’re a celebration of independent, creative and DIY pop music, and it all takes place on a 1950s steam railway in the Derbyshire countryside. Our artists play across four stages, including a picturesque outdoor stage overlooking the railway station, a locomotive shed, a tin tabernacle church and on the steam trains themselves!

It’s a fun and very welcoming festival, and as well as riding on steam trains and dancing to bands, we also have discos, late night karaoke, art and craft workshops, real ale, street foods and lots of activities for kids.

FTR: This year’s line-up might just be the most eclectic and ambitious yet, who are you looking forward to seeing?

Thank you, we’re really excited about this year’s line up! We only book bands that we really love, and of course I can’t list them all here. I think we have some really amazing bands that have never played at the festival before – like British Sea Power, Honeyblood, Amber Arcades, Gwenno and Dream Wife – alongside some familiar faces like The Lovely Eggs, Girl Ray, Haiku Salut and Colour Me Wednesday.

Over the weekend, there’s also going to be some really special performances, including Darren Hayman playing the Hefner album ‘Breaking God’s Heart’, and Sarah Records legends Even As We Speak coming all the way over from Australia.

As well as all of those, I’m personally really looking forward to seeing Sacred Paws, Anna Burch, French Boutik, Sink Ya Teeth and Night Flowers. I could literally list everyone though!

I think there’s lots of different ways to play an amazing headline set. For example, recently at Indietracks I really loved the sets from Cate Le Bon and The Go! Team, which were both outstanding and of course very different from each other. Cate Le Bon was spellbinding, haunting and experimental and The Go! Team was an explosion of pure joy, melody and dancing.

FTR: There’s Bum notes Karaoke on Friday night, what song are you singing? And what prize are you hoping to win?

Ha, I think I’ll be enjoying the karaoke from the audience, rather than taking part. I’m hoping someone else will sing Boom! Shake The Room though, in tribute to Jazzy Jeff, The Fresh Prince and MJ Hibbett – an Indietracks favourite who famously covers the song on the ukulele.

FTR: Anyone can apply to play at Indietracks, who are your favourite bands you discovered through the application process?

Yes, we had over 400 applications this year, and it’s a really enjoyable way to find new bands. From the applications this year, I really like French Boutik (a ‘pop moderniste’, 60s-influenced group from Paris), Tugboat Captain (six-piece lo-fi pop from south London), Tekla (sparse, lofi songs from Manchester) and Whitelands (who will be playing DIY punk on our steam train as it travels through the countryside!).

FTR: A lot of other festivals are moving away from music to more varied entertainment, why does Indietracks keep it mostly about the music?

I think everyone on the team really loves music, and that’s the part of the festival that we’re really excited about. When we’re not doing Indietracks, some of us are also in various bands ourselves (and in one case an orchestra), or promoting shows, DJing and going to gigs. Having said that, we do have art and craft workshops, and there’s lots of activities for kids at the festival. And of course, there’s also the steam train rides and several railway museums. We’re an unlikely combination of steam trains and DIY pop, and it seems to work really well!

FTR: Indietracks is great for promoting female artists, what are you doing right? And what is everyone else doing wrong?

I think Indietracks feels part of a much wider music community where female artists are hopefully recognised fairly and celebrated. It’s the same at festivals like Wales Goes Pop and Decolonise which are brilliant at promoting female artists. This year there were so many female artists that we wanted to book, and we’re so excited to have bands like Honeyblood, Dream Wife, Amber Arcades, Sacred Paws and Girl Ray at Indietracks. We want our festival to be as welcoming for everyone as possible, and would like to keep improving and listening to people so that everyone feels encouraged to attend and take part.

I think some of my favourite memories are just arriving on the site at the start of the festival, chatting to friends, hearing the train whistle, watching Trev from Odd Box Records being the first at the bar every year, and thinking how amazing it is that we can hold a music festival at such a special location. In terms of favourite bands, I’ve already mentioned The Go! Team and Cate Le Bon, and also really loved La Casa Azul and Teenage Fanclub in 2009, Allo Darlin’ in 2014 and The Hidden Cameras sets in 2011.

FTR: You can book any previous performer to perform again, money is no object, who’s playing and why?

I’d really like Stars of Aviation to come back and play one day. They’ve an album on Spotify and Bandcamp which I think was released after they stopped playing shows and is a fantastic lost treasure for those that haven’t heard it already. It’s in turns beautiful, melodic, upbeat and sad, and the songs are so well written.

FTR: Is there any acceptable excuse for not going to Indietracks?

Haha, yes of course! We’re just so happy that people come along each year. Thank you everyone, and see you in a couple of weeks!