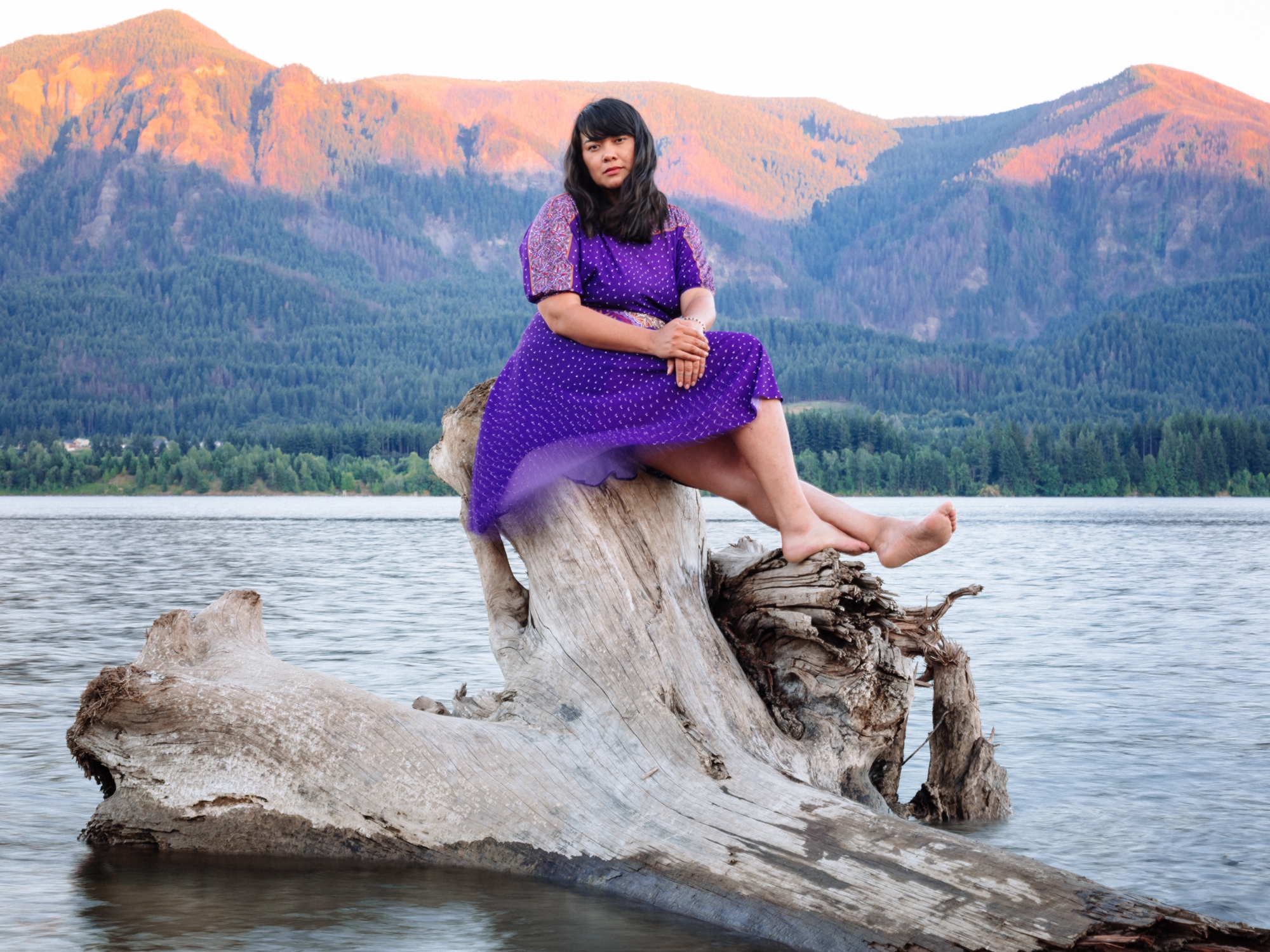 Hailing from Northwest Washington, Black Belt Eagle Scout is the musical moniker of, “radical indigenous queer feminist”, Katherine Paul. Katherine’s earliest experience with music came when she was growing up on a small Indian reservation, the Swinomish Indian Tribal Community. There she was exposed to native drumming, singing and art, as she recalls, “when I was younger, my only form of music was through the songs my ancestors taught the generations of my family. Singing in our language is a spiritual process and it carries on through me in how I create music today”. Latterly, thanks to a series of bootleg VHS tapes of Hole and Nirvana, Katherine was inspired to self-learn the guitar and drums, and eventually moved to Seattle to go to college and attend the Rock’n’Roll Camp for Girls.

All of this experience has gone to shape the debut Black Belt Eagle Scout record, Mother Of My Children, which is out next month on Saddle Creek. The record was recorded in the depth of winter in Washington, following the death of her mentor, Geneviève Castrée, and the collapse of her first meaningful relationship. Discussing the record, Katherine has suggested the songs are, “about grief and love for people, but also about being a native person in what is the United States today“. The two tracks shared to date showcase the versatility of Katherine’s songwriting; Just Lie Down, serves as a reminder to keep on believing things get better even when you’re at your lowest ebb, while Soft Stud reflects on, “the hardships of queer desire within an open relationship.” Lyrically fascinating, thankfully the music is just as good; Just Lie Down is a sizzling slice of gloomy, grungy noise, all over-driven chords and haunting vocal harmonies, while Soft Stud is a more driving and energetic number, that builds and builds to the point of becoming ferociously noisy. Mother Of My Children is a deeply personal collection, a reflection on both personal events and the life of an indigenous minority in modern America, where the government is destroying a lifestyle that pre-dates the country it exists in. It could just be one of the year’s most important records.

FTR: For those who don’t know who is Black Belt Eagle Scout?

My name is KP and I am Black Belt Eagle Scout.  I write and play all of the music on recordings I do and then my friends play with me when we play live. I’m from the Swinomish Indian Tribal Community, an Indian reservation located in Washington State, USA. I’m currently based in Portland, OR. I’m Native American and put a lot of my identity into my music, which helps me process emotions and life. Currently, I have an album that’s coming out on Saddle Creek 9/14.

My first show as Black Belt Eagle Scout was at a friend’s community show called Things People Do, where our community of friends performs things we’ve been working on creatively. I had a drummer and a viola/other guitarist at the time and it was one of the most fun shows ever. It was full of friends and love.

From a young age, I’ve always been surrounded by music. My family had a native big drum group where they would sing and drum at powwows. The group was called the Skagit Valley Singers. I grew up being a jingle dress dancer, dancing to my grandmother leading the big drum group. My parents are also music lovers but never really played any form of ‘rock music.’ I learned about rock music because of the location of my home, just up the highway from Seattle, WA grunge scene and right outside of the DIY/All Ages Anacortes, WA scene.

I know how to carve Co-Salish style from my father, who is a master totem pole carver but haven’t done that in a while. It is something that I plan on doing again in my lifetime.

FTR: What can people expect from the Black Belt Eagle Scout live show?

My live show is a lot more intense than the recordings. I love expression through performance. It’s very empowering to play heavy and loud, yet also have parts that are delicate and quiet. I usually like to have mostly women in my band so adding that empowers our performance even more.

I’m going on tour in the fall, details are still TBD but expect to see me across the United States and hopefully in Europe!

1. No Face by Haley Heynderickx

HH is one of my close friends and her music is so special and beautiful. I listen to her new album I Need To Start a Garden when I wake up in the morning and often when I’m driving at night. She’s an incredibly skilled guitar player and the riffs in No Face are stellar.

2. Monkey Gone To Heaven by The Pixies

Whenever I wanna thrash and scream along to a song I like to listen to Monkey Gone To Heaven by The Pixies. I love the crescendo intensity of Black Francis’ voice when he sings:

This is one of the first songs of Geneviève Castrée’s that I heard when I was growing up in the Anacortes, WA music scene. It’s such a beautiful and raw song. My favorite part of it is at the very end when you have to wait a while in the instrumental part for the vocal part to come back in. When that vocal part comes in, I always get shivers.

4. At least that’s what you said by Wilco

The last half of this song blasts at top volume when I’m driving around in my car. That’s where I listen to the majority of music.
The guitar solo at the end is epic and very inspirational to me as a guitarist. I love the beginning piano of the song and when it transitions to the loud part and the stomping nature when the drums kick in.

5. Get Up by Sleater-Kinney

Get Up by S-K is my childhood inspiration song. This band was definitely my very favorite band at the peak of my teenage years and Get Up was my favorite song of theirs. When I applied to go to the Rock ‘n’ Roll Camp for Girls in high school I wrote about this song and how it made me feel as an angsty queer teen. The song is amazing but what I love most about it is Corin Tucker’s vocal energy.

Mother Of My Children is out September 28th via Saddle Creek. Click HERE for more information on Black Belt Eagle Scout.