Back in 2017, the third edition of First Timers took place at DIY Space For London, around thirty brand new bands formed and played their first shows. Among the bands performing that day were the likes of Panic Pocket, Whitelands and the band we’re featuring today, Secret Power. Looking at the line-up now, it feels like the sort of day where a brand new scene, based around diversity, opportunity and doing it yourself was born.

Since that day, Secret Power have expanded to a three piece band, and honed their live show playing sets around Brighton and London including events such as Decolonise Fest and Synth Punk Fest in 2018. This year looks like it’s going to be a break-out one for the band, with a slot supporting Big Joanie on their upcoming UK tour, as well as the release of their debut EP, which we’re premiering here today. 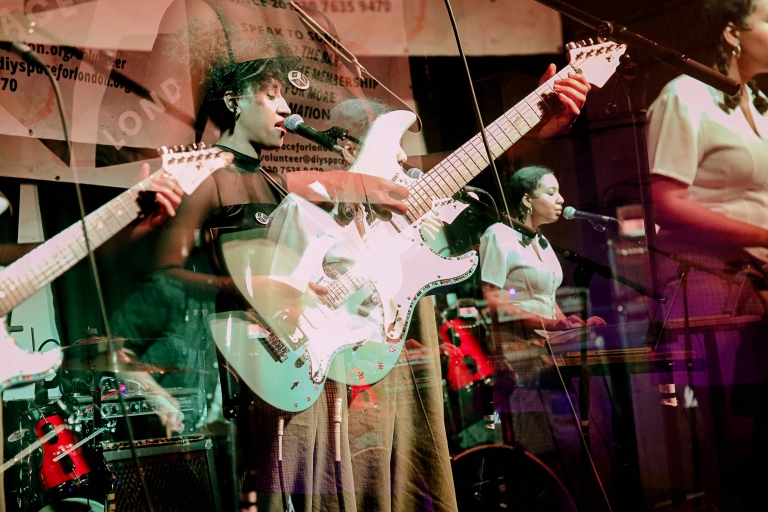 The EP is a showcase of the variety of influences that collide to create Secret Power’s sound; from angular post-punk to girl group harmonies and a love for all things reverby. We’re put in mind of The Wharves or the much missed Totally, who both seemed equally fond of throwing all their favourite sounds at the tape and seeing what sticks. This is music without rules or boundaries, just the limitless freedom of creativity.

Opening track, Hope Springs is a clattering, gloomy call to arms; folky harmonies shimmering atop, driving guitar lines and steady fluttering drum beats. Throughout guitarist Jessica Ashman and keyboardist Summer Scott combine together, as one bewitching wall of vocal wonder; never more evident than on the excellent closing number, Maybe. They even throw in a cover of Aaliyah’s, Try Again, wringing all the inconclusive emotion and insecurity from the original, and adding a spark of doomy distortion and arresting tempo shifts.

There’s a tendency in DIY communities for bands to rush to release music, to throw half-formed ideas into the world, with sometimes thrilling and sometimes infuriating results. Secret Power however seem to have made the sensible decision to take their time, to write a record that feels both exciting and fully realised. It’s the sound of a group ready to make a splash and quite possibly become your new favourite band.

Secret Power is out February 1st via For The Sake Of Tapes. Click HERE for more information on Secret Power.