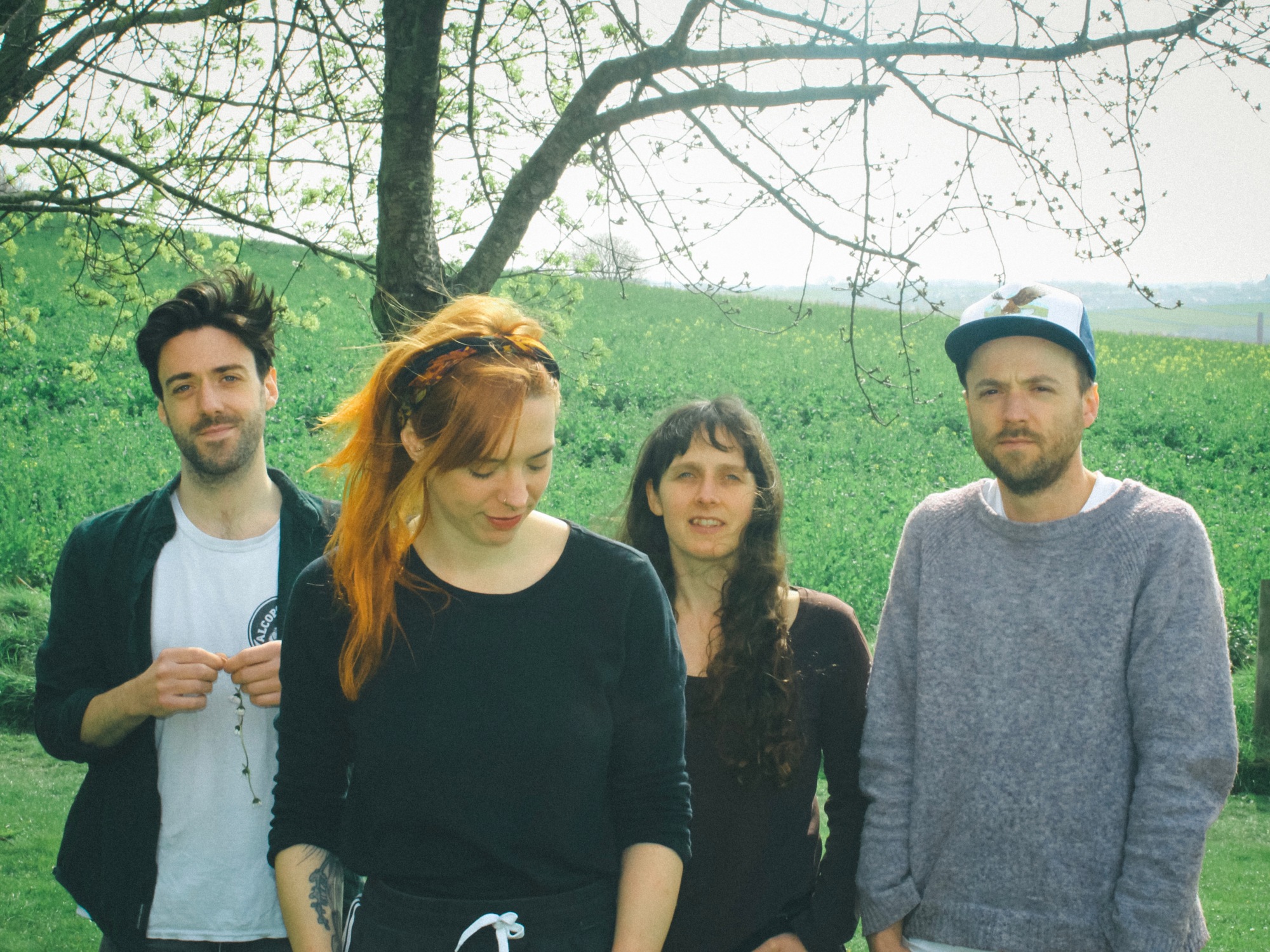 Describing the musical world they inhabit as, “perpetually Autumn”, Leeds’ Crake are an alt-folk quartet whose music blends themes of the natural world with the more human struggles with, “anxiety and the tough stuff”. 2019 has been a breakout year for Crake, having caught the ear of Big Thief’s guitarist Buck Meek, they recently toured Europe with the band, playing a string of huge dates, and culminating in the release of their sublime EP, Dear Natalie. Today Crake are announcing their first headline shows for 2020, and alongside that announcement we’re sharing a stripped-back live version of their track, Oil.

The closing track on Dear Natalie, Oil is in someways the EP’s key emotional moment, while the other tracks offer denser musical textures, Oil’s simplicity and beauty really lends itself to this bare-bones live version. Vocalist and guitarist, Rowan Sandle, takes much of the limelight with her hypnotic guitar pattern, and raw, unadorned vocal line, beneath those though is the beautifully understated work of the rhythm section; Rob Slaters subtly complex drum patterns adding gorgeous complexity, while Sarah Statham’s bass holds the whole performance together.

Lyrically, Oil is a track with subtle, almost cryptic, tale to decipher and decode, a series  of snapshots of conversations and loose recollections. There’s meaning to be found in the words, with enough mystery to leave you not entirely sure. Lines like “my friend Sam said it’s probably more like ten and my friend Sam said depends whose coming” or “you never look so caught out, you’re staring off a bridge, eighty lay us down”, hinting at a story without filling in all the blanks.

A timely reminder of why Crake’s upcoming headline shows are shaping up as some of next year’s most unmissable gigs, watch the video for Oil below, and then read on for our Q&A with the band discussing, their live show, future plans and why they’ll need to, “smash the capitalist music industrial complex” to make a living out of music

FTR: For those who don’t know, who are Crake?

Rowan: Crake is the first project of myself (Rowan Sandle) alongside more long-standing Leeds/Wakeield musicians Sarah Statham (Esper Scout, Fig by Four) and Rob Slater (The Spills, Mi Mye). We wrangled Russel Searle (The Research, The Cribs) into coming on tour with us too, and we haven’t quite let him go yet.

We are also a wider murmuration of past members, close friends and significant places, such as our second home Greenmount Studios, and without them we wouldn’t be able to fill the shapes we do.

FTR: You’ve just announced your first head line shows for next year, as well as a Christmas show for High and Lonesome at the Brudenell in December, so what can people expect from the Crake live show?

Rowan: Tears only happened that one time… and that was because it was our last night with Big Thief and the crowd were the kindest and there was free Aperol spritz…

Usually we flit quickly between the pensive and jovial. We play sad songs but punctuate them in between with an antidote about some creature or other we encountered along the way. Our sets always end with a series of hugs on stage. I’m always so grateful to share a stage with my band.

FTR: We’re sharing a session version of your track Oil, what can you tell us about this recording?

Sarah: The Piano Raft belongs to a friend of mine who’s pulled it with a rope from Liverpool to Leeds over five years. Its creator and inhabitant Ben Cummins is amazing! A real character, artist and visionary. He occasionally asks if I want to stay on it, first in Saltaire and now that he’s moored in Leeds it seemed a perfect setting for Crake. We filmed Oil in one shot, in a style inspired by ‘La Blogothèque’ sessions which I’ve got into quite a few bands through. It’s a really good way of showing a band or artist at their most raw and personal. I suppose having lived on the raft a bit myself it definitely felt like we were caught at home in a way. It’s a very special place, completely unique!

FTR: How was the experience of touring with Big Thief? What did you learn from them?

Sarah: There are very few places that bring out inter-personal dynamics like being on tour. It’s such a homogeneous, shared experience, as well as presenting challenges to you as an individual. Be that organisational, social, mood monitoring, whatever. Big Thief welcomed us with open arms and it didn’t take long to notice a family atmosphere was growing during those dates. Their commitment to music is absolutely unwavering and as a result their songs are of such a high standard. Anyone can hear that and their success is so duly deserved! As people and artists that band is inspiring in ways it’s hard to put into words. I think we’d all agree that being around such a strong work ethic, emphasis on communication and a resulting unified and very special bond has spurred us on into whatever this next phase in Crake is. We came out of that tour with a focus on demoing an album and their encouragement has no doubt contributed to a sense of self-confidence and cohesion in us.

FTR: Who are your musical influences? What about influences outside of music?

Rowan: My writing is inspired by all the things it is to be human. From the felt swells of emotion to our relationships with the unacknowledged critters that hold up our world and that we owe so much in return. Let me tell you about Slime Mould one day. Musically, we have already mentioned Big Thief and John k Samson. Other things we have been listening to and feeling inspired by recently are The Band, Sam Evian, (Sandy) Alex G, Nina Nastasia and we all love Colour Green by Sibylle Baier.

FTR: What made you want to put that EP out on Tarot Cards?

Rowan: I find tarot one of the most therapeutic things I do. I love how the magic stems from its ability to reveal parts of yourself to yourself that you maybe haven’t been listening to. They turn your attention to what we are often forced to neglect to get through the everyday due to business or habit. I like to think of my songwriting a little like this. I hope it not only helps me turn over then settle my own thoughts, but also helps others turn something over in theirs, allowing focus to land on some small forgotten detail of their internal or local landscapes.

FTR: What are your aspirations for Crake? Do you see music as a viable career?

Rowan: Foremost, my aspiration is to write the saddest animal song to date. I think John K Samson and Virtue the cat holds this record presently. In all seriousness, I want Crake to just continue the momentum we have found over the last year. I think we’ve hit our stride as a band. I love how Sarah, Rob and Russel can make these small phrases I write twist and turn with such movement – as long as this keeps happening I’m happy. As for a viable career, I mean that’s the dream. We might have to smash the capitalist music industrial complex first however…

FTR: You released your latest EP, Dear Natalie, back in June. What did you do differently to previous recordings?

Sarah: With ‘Dear Natalie’ being the third release, by the time the session came around we were more comfortable in our roles in the band. On ‘By the Slimemould’ I played drums, and ‘Politics of Lonely’ was Rob’s debut on the kit. So you could say we had a better idea of our separate and collective identities. Also it was the first time Russell appeared on a Crake track. He sent a freshly written guitar take through to us from his house while we were in the studio and we were able to mix it in there and then. This came about as a casual idea of us asking a friend if he wanted to contribute something. That was one of the most spontaneous and exiting things I’ve been part of during a recording session.

Sarah: I’ve always wanted to have the ability to illustrate and people that demonstrate such talents are absolute superheroes to me! I love that we’ve used Rowan’s art in some way on all of our releases so far. Her work for me is so beautiful, authentic and pure – friend and bandmate bias aside! Accepting my own lack of flair with a paintbrush or pen, I find enjoyment taking photographs and making music videos and documentary montages every now and again. Because creative practice can be incredibly time-consuming, factoring in the admin side of work that is essential to pursuing an artist’s life, I’d say that time is probably the biggest reason I haven’t been able to turn my hand at much else creatively aside from music. Still though, being a musician itself requires the use of more tools that your particular instrument or instruments. Gaining understanding of how to work studio technology and hardware is a creative act, for example. But if someone could wave a wand and give me some doodle-pen magic that’d be great!

FTR: What’s next for Crake?

Rowan: We are very much in an Autumnal nest of writing at the moment, but we are really excited to be gigging again in a few months and hopefully debut some new songs!

Dear Natalie is out now. Click HERE for more information on Crake, and see details of their upcoming tour dates below.