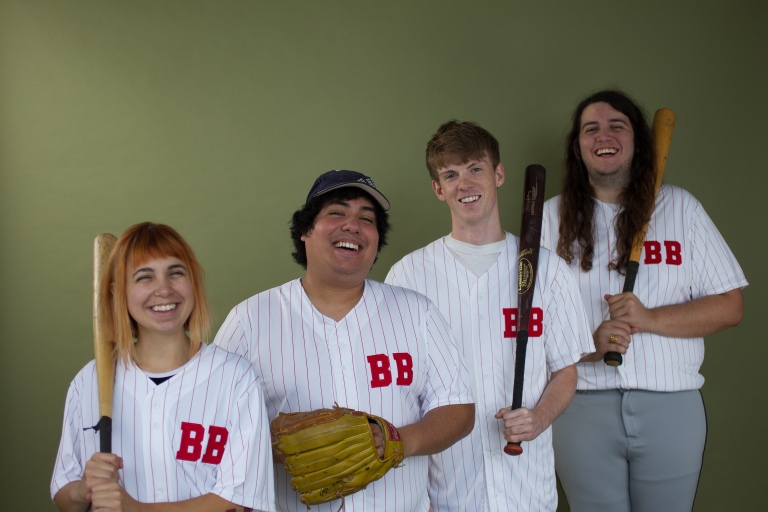 Formed back in 2015, Beach Bunny was originally the bedroom-based solo project of Lili Trifilio. After a series of EP releases, in 2017 the band expanded to their current four-piece lineup, and last week took their first step into the long-form, with their debut album, Honeymoon. Recorded with producer Joe Reinhart at the iconic Electrical Audio in Chicago, Honeymoon is a record described by Lili as, “for anyone who has felt uncertain and doubtful about their future and had the courage to dive in and choose optimism and love”.

Across its nine tracks, Honeymoon takes in elements of 90’s alt-rock, DIY bedroom pop and even a touch of afro-beat on the delightful Colorblind; one moment it has us reminiscing about Allo Darlin’ the next it’s got all the emotional heft of Doe or Diet Cig. Throughout it’s an album of arresting tempo changes, as gentle moments quickly shift into full throttle and dissipate again just as quickly. At the forefront throughout is Lili’s open-hearted vocal delivery and equally potent lyricism, as she dissects themes of self-doubt, love and longing. Honeymoon is a debut album, yet it’s one that comes from an experienced band who’ve given it time to breathe, to allow themselves to grow into their sound and emerge at the very peak of their musical powers.

FTR: For those who don’t know, who are Beach Bunny?

Beach Bunny is the songwriting project of Lili Trifilio and four-piece power pop band based in Chicago. The project consists of up-tempo melodies, emo-centric lyrics, rocking guitars, and pop song structure. The project began in 2015 as a solo artist project and evolved into a full band in 2017 with the addition of Matt Henkles on guitar, Anthony Vacarro on bass, and Jon Alvarado on drums.

My first show ever was a DIY house show in Elgin, Illinois called “The Kitchen Beatdown” which soon after became an annual festival at the house. I remember feeling extremely nervous and shaky setting up the mic but as soon as I started playing the nerves settled. There were many friends in the audience which helped to ease my emotions and kept me grounded when I was looking out into the crowd. The response was so positive and encouraging after the fact that it definitely inspired me to continue wanting to play more shows. It was a pivotal moment in my music career and I’m very happy that my first show with this project was in the presence of people that inspire and care about me.

FTR: Why do you make music and not any other artform?

Music for me has always been therapeutic in a way that other art forms have not been able to match. Music is the medicine for a broken heart and has always been something I’ve turned to in times of distress. Whether it’s been writing music or listening to music, the emotional connection I feel through song has helped me get through tough situations on a soul level. I think there is so much value in exploring creative outlets – regardless of the artform, and creativity should be encouraged in schools, jobs, and in the home because it can provide an emotional outlet for people that is sometimes hard to find in other forms. I hope to continue my passion for music throughout my life as it brings me so much joy on a daily basis.

FTR: What can people expect from the Beach Bunny live show?

Beach Bunny shows are often very high energy events with moshing, dancing, crowd-surfing, and some good ol’ fashioned rock n roll. It’s always amazing seeing the crowd bounce around and groove with the music. Our audience is an interesting mix of punk heads, indie pop kids, and younger girls from the internet so no matter what scene you belong to there’s a spot for everyone at a Beach Bunny show.

FTR: What’s next for Beach Bunny?

The next single dropping off Honeymoon is coming out this Friday, February 7th! So keep your eyes peeled for that. We’re all super stoked for our debut album, Honeymoon, to be dropping on Valentine’s Day! Apart from that we have Coachella coming up and our first tour overseas. Hopefully we will continue to write and record new songs in the near future!

4. Bombay Bicycle Club – How Can You Swallow So Much Sleep

Honeymoon is out February 14th via Mom + Pop. Click HERE for more information on Beach Bunny.