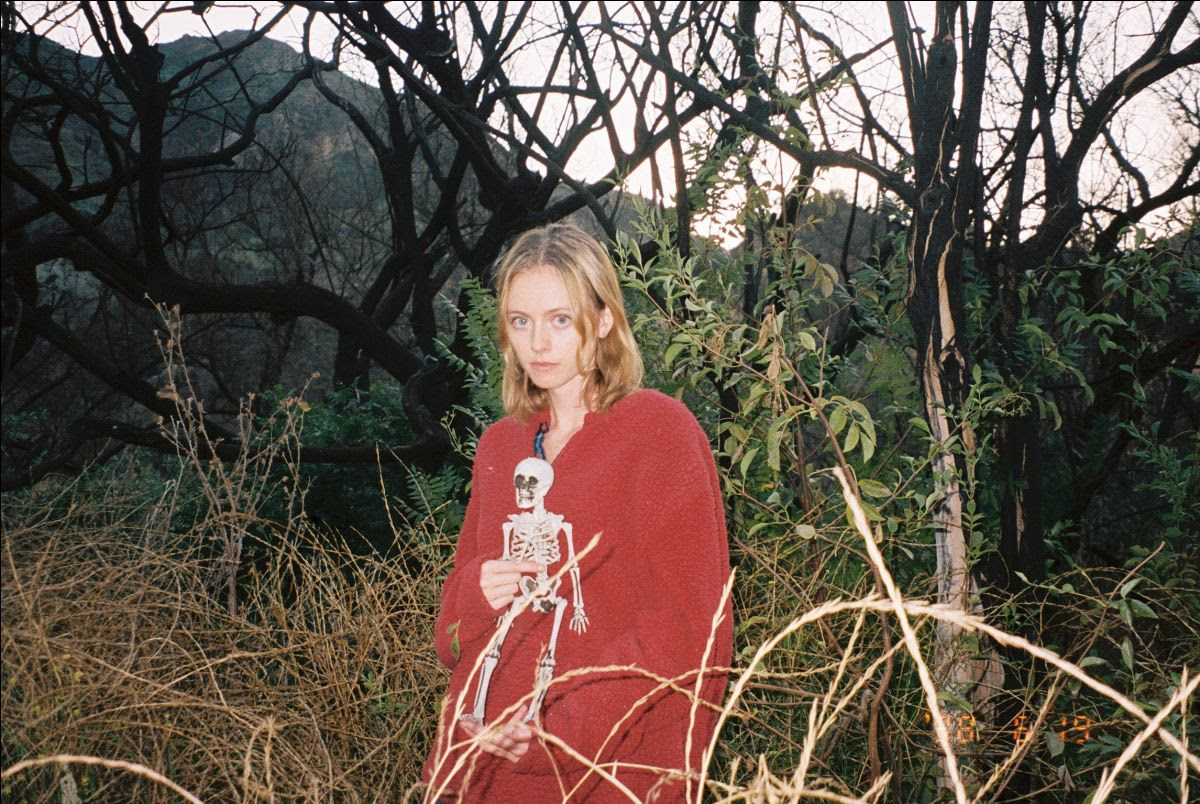 One of your favourite new artists, covering one of your favourite songs is often a recipe for disappointment, thankfully there are exceptions! We’ve been big admirers of Rosie Tucker’s music since we heard their excellent Never Not Never Not Never Not album at the start of last year. Not wanting to rest on their success, Rosie has released a series of follow-up singles, and this week shared their cover of the Jeffrey Lewis classic, Arrow.

Originally appearing on Jeffrey’s 2003 album, It’s the Ones Who’ve Cracked That the Light Shines Through, Arrow is somewhere between a stream of consciousness and a breakdown, a tale of staying up all night and letting your brain run wild, closing on the repeated mantra, “I don’t fall asleep, I ascend to it”. Rosie takes the rapid tumble of acoustic guitars of the original, and reimagines them in a new gloriously electrical fullness. Perhaps the biggest shift is moving the lyrics, almost lost in muffle on the original, and bringing them screaming into the foreground. That decision, coupled with the hedonistic waves of guitar bombast that greet the outro, makes for a cover that keeps the spirit of the original and shifts everything else somewhere new. Does it top the original, perhaps wisely it doesn’t even try, instead it makes something fresh, thrilling and entirely Rosie Tucker’s own, cover’s arguably don’t get better than that.

Arrow is out now via New Professor. Click HERE for more information on Rosie Tucker.

Basing themselves between Brighton and Croydon, Jetstream Pony first emerged back in 2017 when Beth Arzy and Shaun Charman were both members of The Fireworks, and decided to branch out into a new project. Their early iPad recordings caught the ear of vinyl-only label Kleine Untergrund Schallplatten of Augsburg, who put them out to some acclaim. After a series of EPs and singles, the band are set to take a leap forward next month with the release of their self-titled debut album, and this week they’ve shared their brand new single, It’s Fine.

Those who’ve already fallen for Jetstream Pony’s charms will find much to love in It’s Fine, and for those who haven’t, it’s the perfect jumping off point. The band’s sound seem to hark back to the early 90’s, channeling the driving crush of bands like My Bloody Valentine with a more melodic, jangling flourish all of their own. The band may lift their name from a retired racing greyhound, yet here they sound like they’ve got plenty of laps of the track left in them, who knows, when the album arrives, they might even come in first.

Jetstream Pony is out May 22nd via Shelflife Records (US) / Kleine Untergrund Schallplatten (Europe). Click HERE for more information on Jetstream Pony.

Originally from Belfast, although now re-located to Liverpool, Lucy Gaffney has already been making waves in her adopted home city, having already toured with the likes of The Coral, Bill Ryder-Jones and She Drew The Gun. This week saw Lucy take the first step towards capturing a wider audience, with the release of her debut single, Can’t Escape.

Lucy’s music might have its route in the heartbroken world of acoustic songwriting, yet on Can’t Escape it’s given an all-together more modern makeover. The luscious dreamy-pop production, adds a delightful sheen to the bitter heartbreak of Lucy’s lyricism, producing a track reminiscent of Hazel English or Night Flowers. This feels like a hugely exciting introduction, there’s an ease to how naturally Lucy slides into the world of perfect indie-pop, feeling more like a seasoned-pro than a new voice on the scene: don’t expect Lucy Gaffney to stay Liverpool’s best kept secret for long.

Can’t Escape is out now via Modern Sky/Run On Records. Click HERE for more information on Lucy Gaffney.

Based out of Thousand Oaks, California, the music of Angelo De Augustine has made a big impact in a relatively short period of time. It was back in 2017 that Angelo arrived with Swim Inside The Moon, an album literally recorded in a bath tub, that announced his spell-binding songwriting and unforgettable voice to the world. Last year’s follow-up, Tomb, drew critical acclaim, and surprising celebrity fans, including Taylor Swift and The 1975’s Matty Healy. After that release, Angelo wasted no time working on new music, and has this week shared the first fruits of those sessions, Santa Barbara, recorded in New York City, working with label boss and long-term collaborator, Sufjan Stevens.

As with everything Angelo does, there’s a winning subtlety to Santa Barbara, as scratchy flourishes of finger-picked guitars, drift from moments of multi-layered intensity to sparse minimalism, never settling into anything resembling repetition. Angelo’s vocal is as always, the thing that draws you in, sending you reaching for comparisons to the likes of Elliot Smith or Sufjan himself, yet ultimately standing out entirely as his own. Lyrically, Santa Barbara continues a thread that runs through most of Angelo’s music, love and its ability to bring hope with it, through all his doubts, he finds hope, “all this life has been a disguise, except for the hand in mine”. Santa Barbara feels like a beacon of hope on the darkest of nights, a reminder for the lost and lonely, that through it all, love might yet find a way.

1. Make Some Plans For Skullcrusher

Skullcrusher is the somewhat surprisingly titled musical project of LA-based songwriter, Helen Ballentine. Although Helen has been playing piano since the age of just five, it was only after re-locating from upstate New York to study in art in Los Angeles that she found the headspace and freedom to really pursue music. The result is Skullcrusher signing to the renowned Secretly Canadian label, and the June release of their upcoming self-titled EP. Ahead of that release, this week Helen has shared the brand new single, Places/Plans.

Written just over a year ago, Places/Plans was the first song Helen wrote for the Skullcrusher project. As with much of her debut EP, the track reflects on themes of both being alone and letting someone in, as Helen explains, “it is a song for being alone in your room, lying on the floor with a book and the window open, but also for letting someone in to lie with you”. That feeling of content and vulnerability is present too in the music, as the multi-tracked vocals are bathed in warm reverb, initially accompanied by little more than hypnotic guitar-lines, before gorgeous, lightly distorted piano runs enter and send the track spinning off into the ether. There’s a sparseness and a subtlety to Skullcrusher’s music, a boldly minimal sound that really gives the music space to breathe and take the listener on a journey of perfect escapism, and we all need that sometimes.