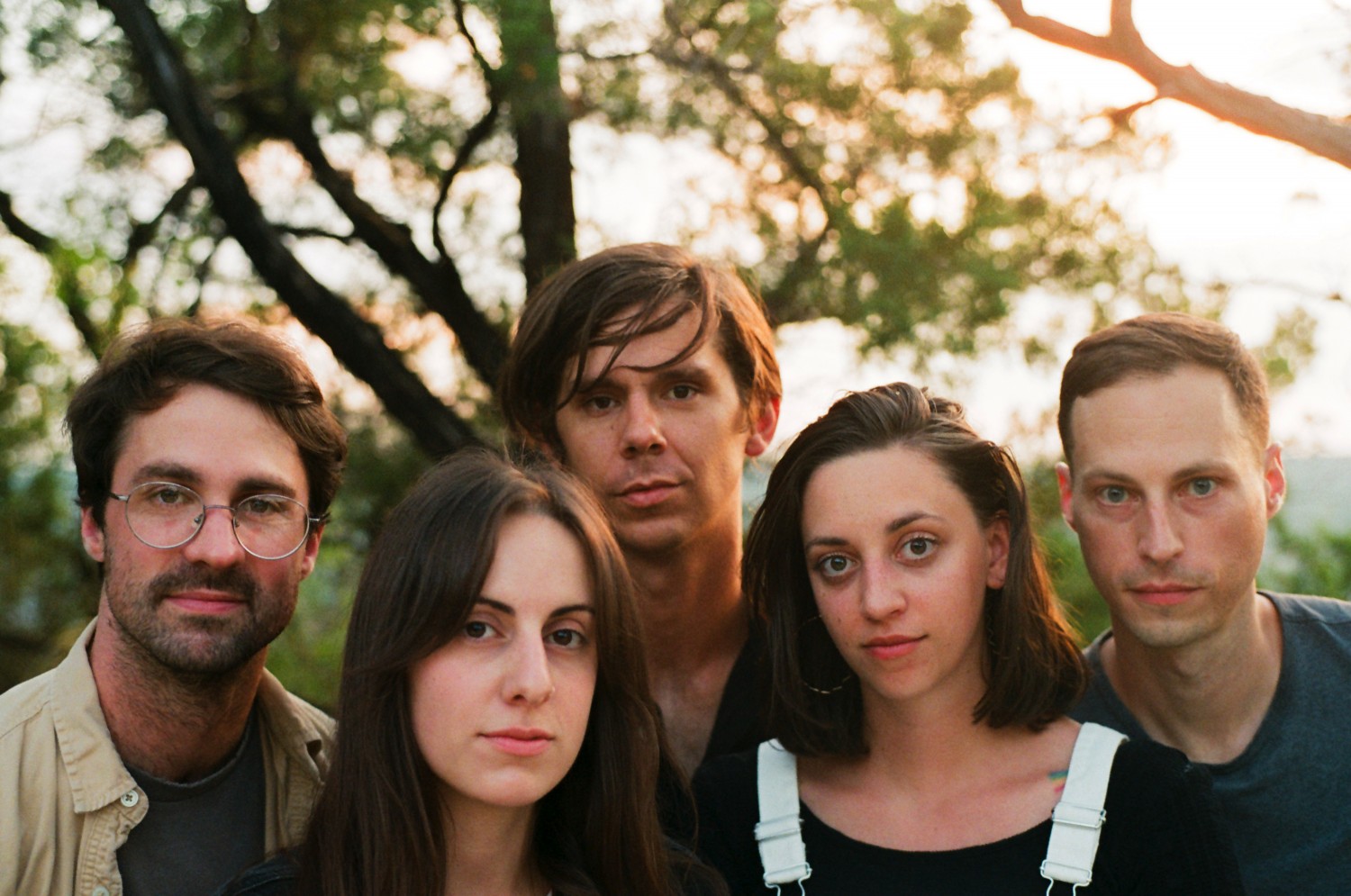 Paper Birch are an experimental noise-rock duo, consisting of Fergus Lawrie, of Urusei Yatsura, and Dee Sada of Steve Albini-produced An Experiment On A Bird In An Air Pump. The band started working together under the enforced distance of 2020, and created their debut album, MORNINGHAIRWATER, which received a minimal digital download release through Cafe Oto imprint TakuRoku. Now one of eight new signings to the excellent Reckless Yes label, alongside the likes of Breakup Haircut, Piney Gir and th’sheridans, MORNINGHAIRWATER is set to receive a much more expansive release later this year.

Listening to MORNINGHAIRWATER, Paper Birch’s sound seems to exist between an array of genres, one moment engulfing the listener in a flurry of angular shoegazing noise, before the next slipping into richly melodic moments of indie-pop. The result is a record that seems to ebb and flow, one that is far more than the sum of its songs; they seem to have almost created a sonic landscape, full of moments of real beauty, and others where the brutality of the natural world is laid bare. Particularly wonderful is Fallen, reminiscent of early-Liars or even Joy Division’s Atmosphere, as it combines dissonant guitars with easy, half-spoken vocals and a steady rhythmic pulse. While the album is already out in the world, with the backing of one of the UK’s most exciting new indie-labels, Paper Birch’s music should reach a whole new array of ears in the year ahead.

Although spending the last decade in Los Angeles, the music of Lael Neale arguably owes more to her upbringing on a farm in Virginia. There surrounded by seemingly endless acres of clouds, fields and woods, Lael became intrigued by those writers and artists who channeled a similar devotion to nature, from John Steinbeck to Mary Oliver. When Los Angeles came calling, Lael let her love for music take her there, exploring various projects, working with countless musicians and always falling short of her own creative desires. That was until Lael stumbled upon the omnichord, the instrument that inspired a creative flurry, the songs captured in their most honest form on a 4-track recorder set-up in her bedroom. Now signed to Sub Pop, Lael has started to drip-feed her music through a series of singles, keeping the world waiting for the announcement of something longer, which I’m hoping will arrive later this year.

Lael’s latest offering, For No One For Now, is a song inspired by the open road, as the agitated pre-programmed disco beats of the omnichord sit in contrast to Lael’s dreamy vocals and the washes of Beach House-like electronics. That track was preceded by the sublime, Every Star Shivers in the Dark, a reminder of how even in the simplicity of two-chords, magic can be found, as the processed electronics channel the spirit of a church organ and Lael dictates a love song to Los Angeles and the sense of community lurking in its vast grey sprawl. What exactly Lale Neale will be sharing this year might remain a tightly guarded secret, on the evidence so far don’t bet against her being one of 2020’s break-out stars.

Not actually a brand-new act, Sun June first appeared on this site back in 2018 around the release of their debut album, Years, yet for the now Austin, Texas-based quintet, this feels like a fresh, and very exciting new chapter. The band’s upcoming record, Somewhere, is set to arrive next month, as a split release between Keeled Scales and their new second home, Run For Cover Records.

Sun June described Years as their, “regret pop” album; a record that focused on the past, in some ways stuck there unsure where to turn next, on Somewhere, the band’s, “prom record”, they seem to emerge firmly in the here and now. While the idea of a prom might conjure up ideas of saccharine popularity contests and outdated traditions, Sun June’s vision is somewhat removed, this isn’t through the eyes of the Kings and Queens of high-school, instead zeroing in on the wallflowers, the kids crying in the bathroom, and the goofy outsiders stumbling in for their awkwardly thrilling first kiss. Much of this feeling is channelled in the band’s latest single, Everything I Had, the sound of the band at their most direct, the sound of watching the world rush past you, feeling like everyone but you is moving on, and wondering whether you can ever keep up. Musically, this manifests as a track that builds from an initially swaggering bass-line, before, courtesy of an increasingly prominent piano takes a turn for the blissfully washed-out, highlighting the sheer wonder of Laura Cowell’s voice, as the band come across like the missing middle ground of Wild Beasts and Why Bonnie. This feels very much like the right time and the right place for Sun June, a band who’ve been gradually honing their sound and now are ready to make a giant splash, the sky is surely the only limit.

Los Angeles-based quartet SLUGS first appeared back in 2018 with their EP, Cool World, a record that caught the attention of many blogs, and saw the band share stages with the likes of Jessica Lea Mayfield, The Districts and Let’s Eat Grandma. Since then things have gone a little quiet, which all changed last month, when they returned with a brand-new single, Super Sane.

Citing influences from Linda Perhacs to The Oh Sees, SLUGS are not a band easily pigeon-holed, with a sound that flutters from the sweetly melodic to the riotously energetic. Super Sane is probably the band at their most restrained, as washes of burbling electronics and gently meandering guitars create a gorgeous backing for vocalist Marissa Longstreet’s impassioned vocal delivery. This is a song of sweet juxtapositions, at times it feels intimate and insular, the next fierce and strong-willed, as it seems to muse on ideas of healing and finding a path to acceptance of your lot. While plans for the year ahead remain as yet unconfirmed, there’s enough here to hint that the return of SLUGS is a reason to be very excited about whatever is coming next.

Formed back in 2019, Nightshift are very much a product of place, the sounds and scenes of Glasgow seeming to course through their collective musical veins. The Scottish-city has always been at the heart of creativity in the UK’s musical climate, a city that blurs the boundaries of genres, always pushing the musical conversation forward. The musicians behind Nightshift already exist in that scene, as members of Spinning Coin, 2 Ply and Robert Sotelo, their coming together seemed almost inevitable from the day guitarist David Campbell and bassist Andrew Doig sat down and discussed the idea of doing something entirely different to where their music has been before. Now expanded to a five-strong collective, the band are teaming up with the ever-intriguing Trouble In Mind Records, who will release the band’s debut album, Zöe, at the end of next month.

While previous material was the sort of hypnotic, groove-led sound that can only be crafted in a practice room, the nature of 2020 forced Nightshift into something of a rethink. They took a layering approach, like a reverse of pass-the-parcel, each member adding their own ideas from their home-studio, before passing it on for someone else to do the same, a process that was forced upon them, memorably described by lyricist Eothen Stearn as, “an exquisite corpse”. The first offering from the record, Make Kin fused wavering saxophone to primal rhythms and spoken word lyricism, as it tried to make sense of kinship as a radical response to the world around them. This week they’re sharing a brand-new track, the album’s seven-minute centre-piece Power Cut, a song that lures the listener in with warm waves of synths and a steady rhythmic-pulse, before slowly descending into a blast of chaotic, dissonant noise that creates a beautifully jarring whole. Intriguingly different to anyone else, Nightshift have made the best of the bad deal 2020 offered them, and whisper it, this record might be even better as a result.

One of the few bands on this list who’ve actually already released their case for being one of 2021’s most intriguing bands, this Monday, Cheekface released their brand-new album, Emphatically No, through New Professor Music. The record finds the Los Angeles-based trio contrasting the mundane nature of everyday living to the background of a world in chaos, it takes a dark-side to find comedy in the face of the void, yet somehow Cheekface seem to manage it, on Best Life they note, “everything is normal”, with the conviction only someone who knows that to be a complete lie can manage.

Musically, Cheekface seem to exist in the lineage of American talk-singers, from Jonathan Richman through to Stephen Malkmums, and more contemporary artists like Car Seat Headrest and Savage Mansion. This a record of strutting bass-lines, guitars with the angularity of post-punk, only without all the po-faced seriousness normally associated with the genre. At the centre throughout are the dual vocals of Greg and Amanda, trading comical lyrical barbs as they discuss geopolitics, mental health crises and narcissistic fascists, mentioning no names of course. If that’s all sounding a little self-congratulatory, worry not, like Jeffrey Lewis or Scott Walker, Cheekface aren’t looking down on the world, they’re very much part of the joke, as Greg notes, “no one else is the punchline of these lyrics…if me and Mandy are poking fun at anyone, it’s us”. If the current state of the world needed a soundtrack to poke a little fun at the darkness, then on Emphatically No, Cheekface might just have written a perfect contender.

Although one of the few artists signed to the brilliant Keeled Scales who have not officially announced they’re releasing a record this year, Renée Reed might just be the most intriguing of the lot. Renée is a musician very much in the family tradition, her Grandfather was an Accordion-playing bandleader, her Uncle a renowned folklorist, her family home and her parents businesses, epicentres for Creole and Cajun-music. In many ways Renée continues the family tradition, and yet in others she’s entirely re-inventing it; very much a product of the modern world, Renée’s music takes the deep-set roots of her forebears and crashes them into contemporary sounds from Cate Le Bon to Françoise Hardy.

Although Renée has been drip feeding her music into the world since back in 2016, last year was something of a step-up, with the release of a pair of intriguing singles. The first offering, Out Loud combines a disarmingly rapid flutter of choppy guitars and percussive vocal inflections, while Until Tomorrow is a meandering Southern-folk song, Renée’s tremulous vocal accompanied by a slither of guitar, reminiscent of Vera Sola or labelmate Tenci. With the tantalising promise of, “plenty more to come”, Renée Reed is well placed to be one of 2021’s break-out stars.

Missed the first seven acts, you can see them HERE. Part three will follow soon.