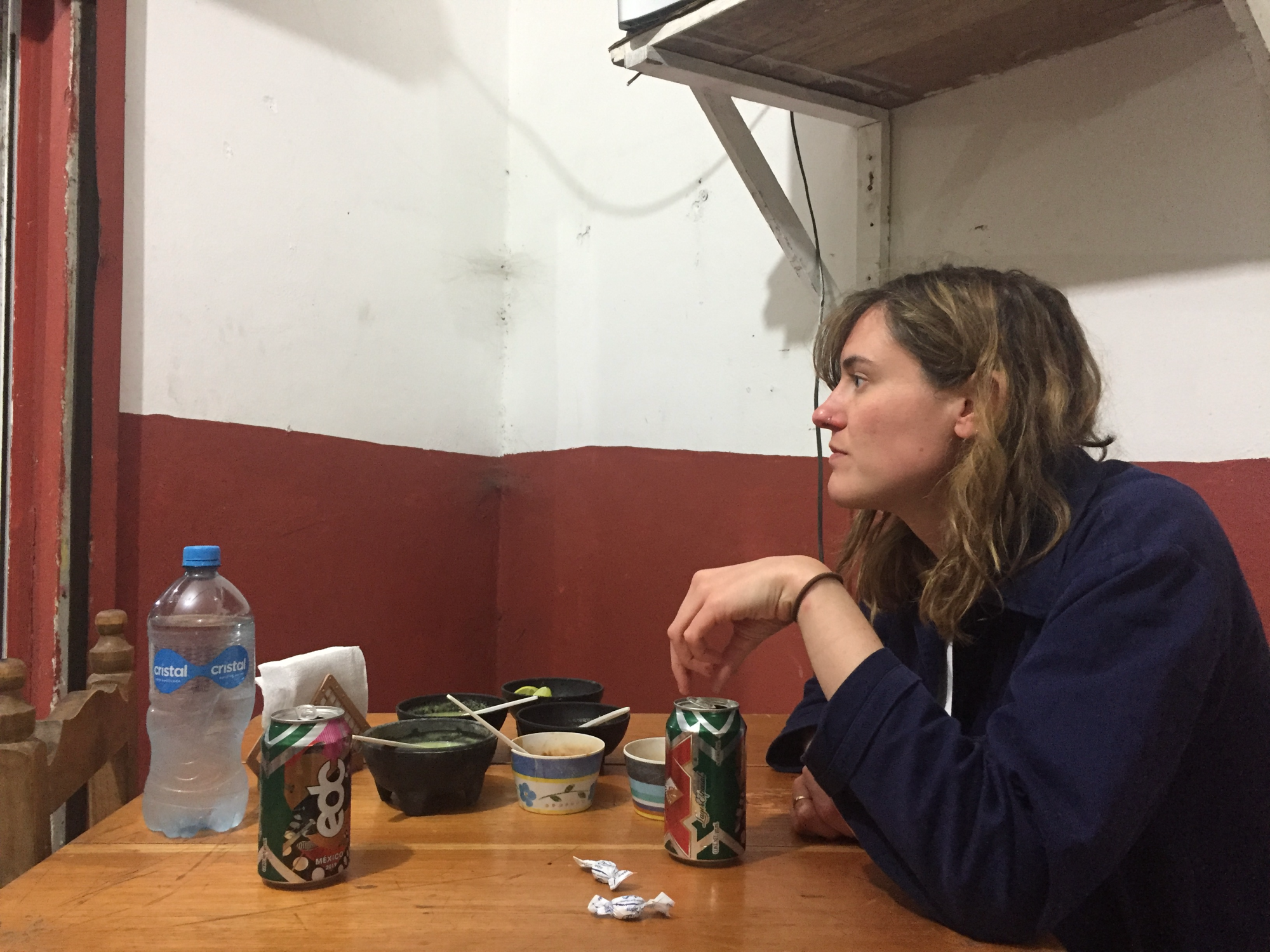 Regular readers will already know Joely Smith as one-quarter of London twee-core favourites, Adults. With band-life on hold over the last year, Joely decided it was time to finally put the solo-songwriting to the fore, and the result is a collection of demos, compiled into a six-track EP, thats when gd neighbours become gd friends, that Joely released earlier this month.

Ostensibly a collection of tracks that Joely didn’t think would fit into the musical-world of Adults, thats when gd neighbours become gd friends, therefore marks something of a sonic departure. The record opens with WOMANCHILD, a scene setting blast of fuzzy DIY-pop, initially recalling Oh Peas, before sliding out on the sort of delightfully anarchic guitar twiddling that Courtney Barnett does so well. Elsewhere, WAIT has a certain garage-rock feel bringing to mind Henrik Appel, while the wonderful PALE has an almost Velvet Underground-swagger to its downbeat tale of life getting in the way, highlighted in the repeated line, “does it matter what keeps us apart?” While stressing this is just an aside from the main project of Adults, in this, “purge”, of what are essentially demos, there’s something here worth exploring: sometimes you’ve just got to set songs free and let them shine, and Joely Smith shines very bright indeed.

FTR: For those who don’t know who is Joely Smith?

i’m in the band adults, the truth is that this is just offshoot demos that have been written that didn’t suit adults. i ended up playing about with them because its fun to write and put together music. actually it was kind of inspired by atlanta dream season. ads reached out last year and we did some things together and having someone else’s babies to then mess about on, with a fuzzy loud guitar, was really freeing (thanks guys!). but then i had all this energy & the songs i wrote all came out a bit hodgepodge & they had no home. i wanted rid because it can feel like if a song isn’t ‘released’ if u like then it buzzes away and u cant really ‘finish’ a song can u; u just get to a point where u have to stop & especially with the pandemic situ i wont stop unless i purge myself of them & i didn’t want to play with them anymore. so that kinda is it. they r free. & it’s a v nice bonus if someone wants to listen.

shows lol i cant imagine these songs will see shows, but adults hopefully will and for that i can’t wait. the first time adults played i was also in another band and played back to back and it was a bit knackering but also so exciting to play with these adults & show off to friends how good they were and i had sneakily found my way into it.

other art forms take a lot more effort. the music stuff is already set up in the flat but the paints are in the chest and i have to clean the brushes afterwards.

tho tbh other art forms are probably a lot easier in lockdown, seeing as everyone is at home and i dont care if yr the ghost of elvis, everyone would get sick after 8 takes of hound dog.

FTR: What can people expect from the Joely Smith live show?

the rest of adults, it will be an adults show

& hopefully bitch hunt(!) as we had to postpone a show with them. we put out a split with For The Sake of Tapes and wanted to celebrate and then this and then cancelled life. so my dream is to be singing along to spaceman ❤

FTR: What’s next for Joely Smith?

the tom petty cover hand habits performed with angel olsen on repeat. youd probs be hard pushed to find a more veracious, on the level, performance. and this got me in the youtube algorithms in a right hand habits whirlpool. 4th july is amazing, i think written pretty soon after an earthquake freaked them out (justifiably i’d say as a chump on reposing uk soil). It was produced by sasami and the sounds on it keep surprising me. md is obviously an insanely talented guitarist but the sparing way they play and the tone of their guitar in this with that heavy drum sound. yumyumyumyum

all of the songs on this double ep sound incredible with the full band. whilst there is a special place in our hearts for the original demos, the harmonies and dynamics in these versions just makes me feel dead angry-happy. an angry chorus chanter is healing. recommended as loud as yr neighbours allow, paired with a fruity rosenstock ‘we begged 2 explode’ & just have a little shout about. i feel better just thinking about it.

this band were so great. the vocals on it alone are everything needed. they split ☹ but don’t woz cos shows don’t exist anyway so they can still be yr new fav band and i shouldn’t have said anything.

emily has such a talent for melody. the way it blows up and falls back down and expands and contracts throughout the song is exciting and impressive and this track is a humdinger innit. ive listened to it a lot in the past year and there are some great backing vocals for shared kitchen performances if anyone wants to hit me up come june 21st.

could bring u to tears. ‘u were the night that had to depart and i was the prodigal son. returning to places i knew before i knew the dark could come’ corrrrrr

thats when gd neighbours become gd friends is out now. For more information on Joely Smith go to https://joelysmith.bandcamp.com/.