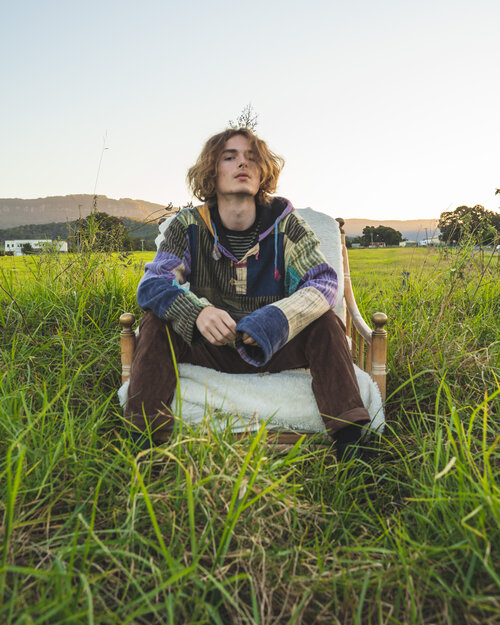 Aodhan · Flies In My Room

AODHAN is the project of seventeen-year-old musician, Aidan Whitehall, an indigenous Dhawaral songwriter from Wollongong, Australia. Aidan’s early singles have seen him branch out into the world at large with his 2019 single Butterflies drawing acclaim across the globe. After that early success, the debut AODHAN EP, Flies In My Room, recorded alongside producer Ryan Miller, was released back in July via AntiFragile Music.

Like many modern songwriters, AODHAN’s music is not something that fits neatly into a specific musical genre. On the one hand, he seems to fit a lineage of troubadours, from Nick Drake through to Elliot Smith, yet at times the production seems to take him somewhere else entirely. Take a track like the ragged brilliance of I’m Closed, with its choppy guitars and burbling electronics it’s closer to Kane Strang or the Lemonheads than any acoustic-guitar wielding stereotype. AODHAN has spoken of being influenced by an increasingly expansive collection of sounds, “I gradually took more and more tiny pieces of music that I love and have turned it into what it is now”. One clear influence is the dream-pop of acts like WAVVES or Wild Nothing, AODHAN taking his naturally wistful vocal and spinning it through a kaleidoscope of hazy glory, never more evident than on the fabulous Twelve Again, a song as vast and expansive as the Australian outback. AODHAN is a songwriter rapidly learning his craft, soaking up influences and making them into his own, with open ears this talented musician’s potential is limitless and that’s a very exciting place for any songwriter to be.

FTR: For those who don’t know who is Aodhan?

My first ever gig as Aodhan was when I was 15 years old, at a music lounge in Wollongong‘s town hall. I think it was actually just called ‘The Music Lounge’. It was this fun little show put together by a local theatre company who booked a couple of other acts as well as myself, so there was a bit of comedy, acting, film, even a bit of drag. I was asked to play a short set of about 3 songs and I think I only had 3 released songs at that time so that was pretty convenient. It ended being a really nice little show

I do quite enjoy other art forms like photography and sometimes I’ll sketch something up, despite not being great at it. But music has just always been that little bit more up in my face, music has always just been around. My dad is a musician and I’ve got lots of other family who are quite musically talented or just really enjoy it as well so it runs in the family. I’d say that’s probably why I’ve picked music and I absolutely love it

FTR: What can people expect from the Aodhan’s live show?

Usually I’ve got a five piece band who help liven up the songs for a live show. It’s a pretty standard setup – bass, lead guitar, drums, keys, and myself on guitar and vocals. But it kinda depends on the type of gig, sometimes I’ll just put a three piece or duo set together for smaller venues, or sometimes just solo as well.

FTR: What’s next for Aodhan?

I think I’ve just reached the end of the first Aodhan era having released my debut EP this year, as well as a fun follow up single. So now it’s probably time to knuckle down on some new material and get ready for a new era. Unfortunately New South Wales is still in lockdown right now so really there’s nothing else I can do except write, and that’s exactly what I’ve been doing. However next year, if COVID disappears, is looking pretty fun so hopefully all goes well.

Flies In My Room is out now via AntiFragile Music. For more information on AODHAN visit https://linktr.ee/aodha.n.