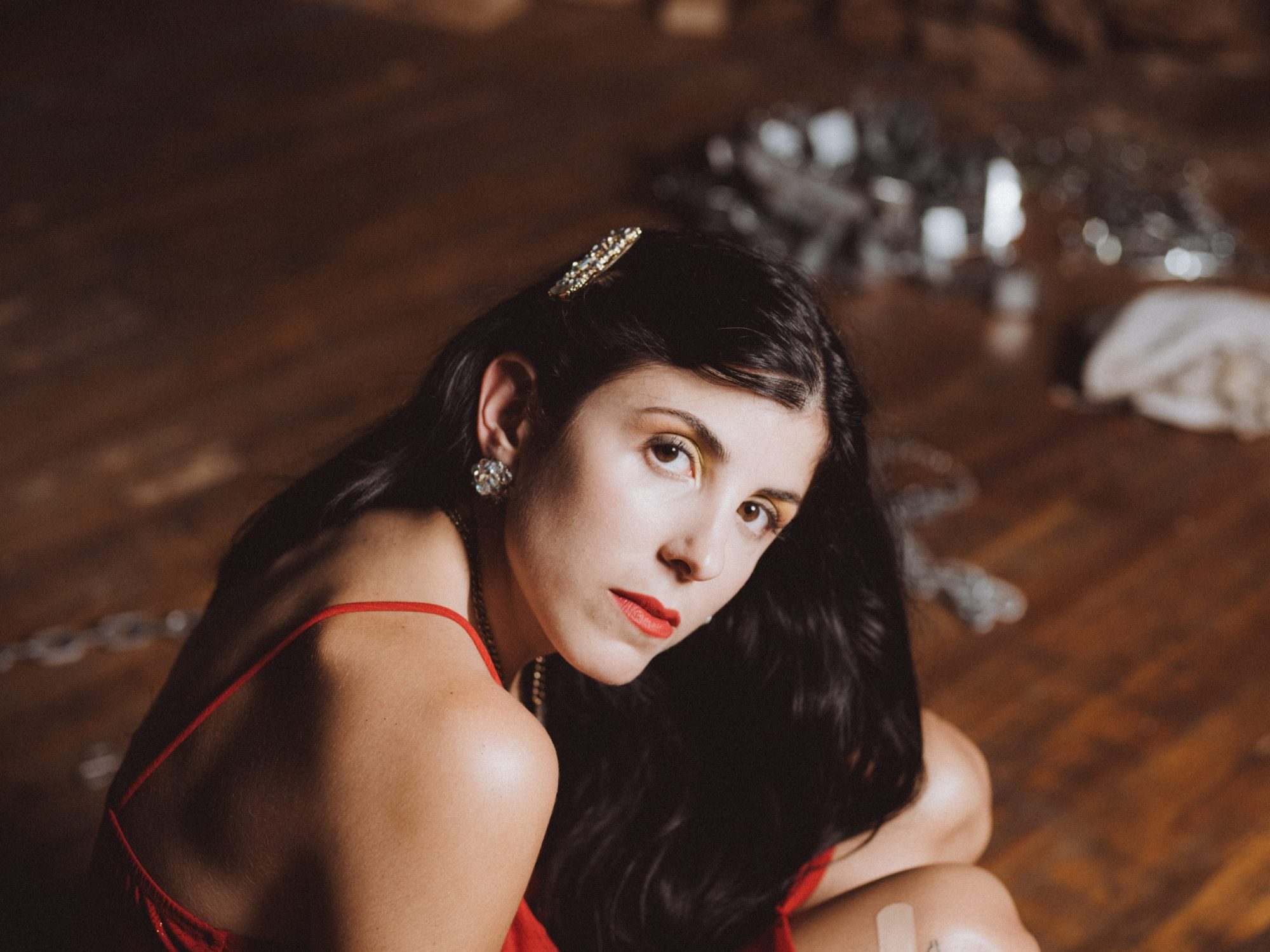 Boy Scouts, the musical moniker of Californian songwriter Taylor Vick, first came to my attention back in 2019 with the release of the fabulously well-received album, Free Company. Two years on and Taylor’s profile has shifted somewhat, with plenty of expectations now surrounding her next move. We’ll find out where those two years have taken Taylor’s songwriting next week with the release of her new album, Wayfinder. Ahead of that release, this week Boy Scouts shared the latest single from it, A Lot To Ask.

A Lot To Ask in many ways is a voyage of self-discovery, an attempt to grapple with finding your place in the world, while not losing all the peculiarities and flaws that make us all delightfully human. As Taylor explains, the roots of the song are in wanting to avoid conflict at all costs, even with herself, “until recent years, this also meant not acknowledging or wanting to look at any issues of my own”. While the track in no ways feels like an end to Taylor’s journey towards belonging, it does mark an important step on that road, “I don’t mean to come off like this but being myself’s a lot to ask”. Musically, the track is a delight, the intros rhythmic pulse of acoustic guitar and half-spoken vocals bringing to mind label-mate Andy Shauf before the track heads off to classic Boy Scouts territory, existing in the sun-dappled middle ground of Americana and Bedroom-Pop. Discussing the inspiration behind Wayfinder, Taylor has spoken of music as her guiding light, “for my whole life, music has been a crucial part of my identity and how I relate to the world” when the album arrives next week expect the torch to be passed on, the album will show us all the way, and expect an awful lot of people to fall for its brightly shining charms.

Wayfinder is out October 1st via ANTI- Records. For more information on Boy Scouts visit https://boyscoutsband.com/.

Those with particularly keen memories might recall we featured Night Shop, the Los Angeles-based project of musician Justin Sullivan, on these pages back in 2018. That was around the release of his 2018 debut album, In The Break. That record marked a return to music for Justin, who had previously made his name behind the drum kit, playing and collaborating with the likes of Kevin Morby and Waxahatchee, as well as being a founding member of Flat Worms. After losing a good friend in tragic circumstances, Justin took some time out to concentrate on his mental health. He got a steady job, spent some time at home and found his passion for music renewed, “it was the thing I couldn’t wait to do when I came home from work. It allowed me to reconnect with the joy of just creating”. Teaming up with Dangerbird Records, Night Shop are set to return in December with a new album Forever Night, and this week Justin shared its exquisite title track.

Perhaps fittingly for Justin’s story, Forever Night is in many ways a celebration of making music, as he explains, “it’s a song about feeling grateful and inspired by the pace and lessons of the city and the pace and lessons of getting to experience a life spent playing music”. It’s a message that rings particularly true after eighteen months of not experiencing live music, don’t be surprised if you find yourself welling up, or punching the air with joyous connection, as Justin sings, “I want to go where the music’s loud, that’s where I belong, I want to lose myself in a crowd and inside a song”. Musically, it’s a suitably rambunctious beast, all chugging guitar chords and pounding, hip-shaking, heart-thumping, snare-drum cracks, barely slowing down at all as it rushes by in a joyous blur of punky-Americana. This feels like music refreshed, if Night Shop can teach us anything it’s that the dream never dies, it just sometimes needs a little break to come back firing on all cylinders and ready to take on the world.

3. The Ophelias Are Blooming Marvelous

A quartet based out of Cincinnati, Ohio, The Ophelias burst onto the scene back in 2018 with the release of their acclaimed second album, Almost. The album took the band beyond their home city, and with that success, also left them craving a sense of community. After the subsequent years that saw the band move cities, graduate university and recruit a new bass player, they set about trying to get back to the “experimental, communal spirit”, that fuelled their earlier material. The result is the band’s third album Crocus, which is out today, and earlier this week they shared the accompanying video for the record’s title track.

Discussing the inspiration behind Crocus, vocalist Spencer Peppet has suggested it was inspired by a comment from a friend that, “the first song on an album should be an overture, a thesis statement, a prologue“. Here it’s a single line, “I hope that you are happier now, but I hope that you dream of me”, that serves as a throughline for the album, a reflection on the importance of a past relationship, and wanting that to be shared by your former love. Musically, there’s a gorgeous lightness of touch here, a quality Spencer suggests was found by keeping things close to the original demo, “I wanted this song to stay as intimate as it began“. Opening with the sound of running water, that track’s propulsion comes from the rhythmic pulse of the finger-picked guitars, as waves of luxurious violins add a glorious ebb and flow throughout. While there are moments where the music swells to subtle crescendos, at the heart the instrumentation is there to highlight the emotion of Spencer’s words. At times the music pairs back, as if to allow the full limelight to fall on her reluctantly understanding words, “I hope that you can’t bear the thought of how my body looked the first time, I hope that maybe in your chest, you’ll always get a little worked up about it”. While The Ophelias are a band capable of wearing a variety of musical masks, somehow this feels the most authentic, it feels like they’ve peeled back the layers and left the beating, sentimental heart shine through, tender, raw and really rather magical, like a Crocus in springtime, The Ophelias have never been better.

Crocus is out today via Joyful Noise Records. For more information on The Ophelias visit https://theopheliasband.com/.

2. If You Don’t Know Lizzie Loveless You Should

As featured on these pages just one month ago, Lizzie Loveless is the new solo project of Lizzie Lieberson, who made her name with her sisters in the band TEEN. After the band called it a day back in 2019, Lizzie spent two years, “getting to know herself”, and the result is the debut Lizzie Loveless album, You Don’t Know released last week via Egghunt Records. Marking the release, Lizzie recently shared the video that accompanies the excellent title track.

You Don’t Know is a delightfully straight-talking piece of songwriting, Lizzie scalding another for their mistaken belief things might be different this time around, “you don’t know what it means to be with me babe, you don’t know what it means to stay”. Musically, the track starts with just Lizzie and the warm chords of a Rhodes-like keyboard, it has all the intimacy of early Perfume Genius, with the swooping romanticism of Natalie Prass. From there the song seems to be almost constantly inflating, the tick of drums and increasingly prominent melodic adornments, taking the track towards its buzzing crescendo, resplendent with Theremin like electronics swoops, choral backing and a bombastic guitar solo that Neil Young would be proud of. Like the rest of the album to which it lends its title, You Don’t Know is the sound of Lizzie Loveless looking to the future, sure there’s a hint of sadness at losing what was, yet more so this is a record about having the confidence and fearlessness to be positive about what’s around the corner: for Lizzie Loveless the future looks very bright indeed.

You Don’t Know is out now via Egghunt Records. For more information on Lizzie Loveless visit https://www.lizzieloveless.com/.

Ada Lea, aka Montreal songwriter Alexandra Levy, came crashing onto the alternative music landscape back in 2018 with the release of her brilliant debut album, what we say in private. The record was a vivid snapshot of a personal crisis, presented via an eclectic musical palette taking in elements of folk, electronica and everything in between. After following up that success with last year’s EP, woman, here, today sees Ada team up with Saddle Creek for the release of her new album, one hand on the steering wheel another one sewing a garden. Ahead of that release, this week Ada has shared the latest track from the record, can’t stop me from dying.

Listening to can’t stop me from dying, there’s an almost retro-futurist quality to the track, the swamping processed bass and distorted, pitch-shifted vocals sounding like a musician from the 1980s imagining what 2021 might sound like. While at first, it feels quite alien to the music you’ve come to expect from Ada Lea, as the song progresses much of what has always been so compelling about her songwriting remains in place, in particular the subtle voyeuristic quality to the lyrics, Ada imagining a person on a night out who dies each time they make a mistake and then is reborn like a video game character, only with a little more understanding of the world around her each time. As Ada explains learning from past mistakes is all we can do, as she bluntly put it, “we’re gonna mess up, we’re gonna hurt people, nothing can stop that from happening and nothing can stop you from dying”. This fabulous new record is further evidence of the unique musical vision Ada Lea possesses, there’s nobody out there making music as she does, because nobody else seems to quite see the world the same way she does, and if that’s not the sign of a songwriter who deserves your attention, I’m not sure what is.

one hand on the steering wheel another one sewing a garden is out today via Saddle Creek. For more information on Ada Lea visit https://www.adaleamusic.com/.