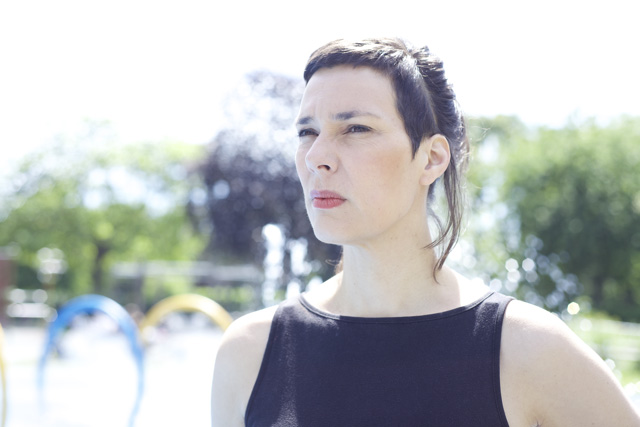 This last week saw the final Scared To Dance gig night of the year, and it was a typically eclectic and exciting line up, which featured bands at every stage of their career from the fresh and exciting, to established legends of the scene.

Opening proceedings were London four-piece Wolf Girl. The band are set to release their debut album next year on Odd Box Records, and are currently seemingly in the process of playing as many shows as is humanly possible. We saw them just a couple of weeks back playing with Chorusgirl, and currently they seem to never be far away from a stage. It’s a set of two halves, the first few songs are plagued by sound-problems, guitars cutting in and out, and seemingly fluctuating in volume and brightness. Luckily by three or four songs in, just in time for the growing crowd who are still ambling in, they seem to have sorted the problems out. Whilst their confidence seems a little knocked, and the mix still isn’t perfect, with tracks as good as recent single Deep Sea Diver, it’s still enjoyable, and they’re a band we’re expecting big things from in 2016.

The main support for the evening comes in the shape of Cosines. The five-piece signed to Fika Recordings are an excellent match, providing some of the krautrock meets indie-pop sound associated with Stereolab, which Lætitia has now moved away from. It’s a real mixed bag of influences, from the Kraftwerk-inspired Commuter Love, through to some pure pop Camera Obscura wouldn’t shy away from, and healthy doses of Northern-Soul, New Order and Neu! The tracks are largely lifted from last year’s album, Oscillations and with a polished delivery, unique blend of influences and fine stage-craft it’s a highly enjoyable set.

Headlining tonight was the somewhat legendary Lætitia Sadier, who of course made her name with Stereolab. The London based band was known as one of the most influential and original bands of the 1990’s, taking inspiration from krautrock, lounge music and 1960’s pop. Stereolab went on indefinite hiatus in 2009, and Lætitia has since gone on to release three solo albums. Having seen her set at Indietracks earlier this year heavily affected by it pouring down with rain, this was a rare chance to catch Lætitia playing live.

Truly great performers don’t have to do anything to get your attention. Lætitia manages to silence a sold-out room full of chattering Friday-night punters with little more than a softly spoken hello. Some people are just born with star-quality, and Lætitia has it in abundance. The set is a stripped-back affair, with just the backing of an electric guitar and seemingly one effects-pedal, her voice has nowhere to hide, but if you’re as wonderful a singer as Lætitia is, that’s no problem at all. It’s almost impossible to hear Lætitia sing without thinking of the classic female French-voices, it’s almost cliched to mention Édith Piaf or Françoise Hardy but it is in their legacy that her music is steeped. She throws in covers, the odd Stereolab track and smatterings of tracks lifted from her three solo albums, all rapturously, if quietly, lapped up by an audience who are by this point eating out the palm of her hand. Even for those, like us, not entirely familiar with her back catalogue it just feels like a privilege to spend an hour in the presence of such talent, a truly magical performance.

BC Camplight – Why Doesn’t Anybody Fall In Love
Oh Peas! – Learning To Love You Less
Pete Astor – My Right Hand
Smog – Dress Sexy At My Funeral
Tuff Love – Flamingo

Cass McCombs – Dreams Come True Girl
The Flamingos – I Only Have Eyes For You
Alvvays – Archie, Marry Me
PINS – Young Girls