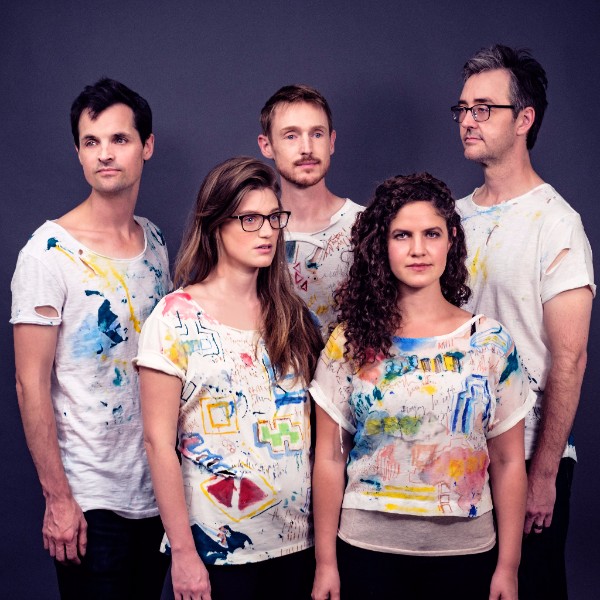 Earlier this month, Brooklyn dream-pop quintet Bodies Be Rivers shared their debut album, Things I’ll Tell You When You’re Older. A record that finds lead-singer, and chief songwriter, Lauren Smith, looking backwards over the decisions she made in her 20’s, viewing how some things have faded to nothing, while other remains vibrant and vital. As such it is a lyrical exploration of growing up; a songwriter who has touched upon self-doubt and self-discovery, and now is able to look back on both with a sense of what is truly important: being happy in yourself.

Musically, Things I’ll Tell You When You’re Older is a versatile and vibrant record, shifting from the soaring majesty of Rattled to the downbeat Portishead-like, To The Water, with its twitching beat and haunting vocal. This a record that takes elements of shoe-gaze and dream-pop, but never settles into the clichéd trick of washing everything out with waves of non-descript reverb. With its slithering vocal lines, propulsive beats and clever instrumental arrangements it brings to mind the likes of Grizzly Bear or Feist. The star throughout though is the swooning, ever evolving vocal of Lauren Smith, at times she seems to jump to the foreground demanding the listener’s attention, at others, happy to become engulfed into the music around her, the words losing meaning as they become simply another part of the music’s all-encompassing emotion.

Serving as a spectacular introduction to a most intriguing band, Things I’ll Tell You When You’re Older is a record as fascinating as it is beautiful. Today the band have been kind enough to talk us through the record and their future plans, taking in the escapism of the recording studio, their aspirations for this record and, “the pure magic” of making music.

FTR: Who are Bodies Be Rivers?

We are a group of good friends who write and play music together. BBR was founded by Lauren Smith and Thomas Stephanos and along the way we recruited Thomas’ sister, Summer, and our good friends, Jason, Matt and Mike!

FTR: You’ve just released your debut album, Things I’ll Tell You When You’re Older, what can you tell us about recording the record?

We recorded the record in Woodstock, NY at a studio called The Isokon, which is run by D. James Goodwin, who also co-produced, engineered, mixed, and mastered the full album. We literally moved into the studio for the duration of the recording. We ate there, we slept there; it was an all encompassing experience. By being so fully immersed, we were able to disconnect from the everyday distractions of life and fully focus on the songs. We had a really great time.

FTR: The album has an intriguing title, who are these messages for?

The songs that became this record were all rooted in an exploration of the past. I (Lauren) turned 30 when writing this album and in many of these songs, I visit different versions of my past self and come to terms with who I was and ultimately who I have become. There was such a profound shift that I experienced when I left my 20’s, and I wanted to chronicle the events that led to that shift — through this music. When coming up with the title for the album, I imagined these songs to be little messages or lessons that I could give to my younger self if I were able to sit down with her today.

FTR: You’re based out of Brooklyn; what are the pros and cons of being from such a busy musical city?

There are so many pros from being based out of Brooklyn. We’re incredibly lucky to be surrounded by some of the best music in the world. On any given night, we can hear our favorite bands and are inspired by the constant creative energy that flows through this borough. I guess the cons are that there’s so much music happening all the time that there’s no way you can hear it all and the fear of missing out can take you over!

FTR: You lifted your name from an Angel Olsen track; is her music a big influence on you? Which other musicians inspired your album?

We love Angel Olsen. Her album, Burn Your Fire For No Witness is one of our top favorite records of all time. We listen to a lot of music and are constantly being inspired by so many artists! Artists like Mitski, Half Waif, Big Thief and Tiny Hazard were on heavy rotation during the making of this record!

We make music because it’s our favorite thing to do! Sometimes the process of writing a song can feel extremely hard but when it all comes together and you create a piece of music that expresses exactly what it is that you were trying to get across, it feels like pure magic.

FTR: Do you enjoy the other aspects of being in a band? Making videos, photoshoots, interviews that kind of thing.

We definitely enjoy these aspects. It’s always satisfying to take a step outside of the sometimes solitary and internal world of making music and see it manifest externally in different ways, like through videos, photoshoots and interviews. It gives the band an external identity, which is a necessary element when presenting any kind of creative endeavor.

FTR: What can people expect from the Bodies Be Rivers live show?

We love playing shows and its very important to us that people walk away feeling like we gave them our all! We practice a lot and want our performances to feel sincere and thoughtful. Our goal is to give our audience a heartfelt and fully present performance!

FTR: Do you plan to tour the record?

FTR: What are your aspirations for the record?

Our greatest aspiration would be for the songs to reach a lot of ears! To know that what we made might be meaningful to another person is just the best feeling on the earth.

FTR: Do you see music as a viable career?Honestly, not really. That is not to say that we wouldn’t welcome any sort of music career path that came our way! But over our time as musicians, we’ve grown to learn that all you can focus on is making good art. That’s the foundation. We all have other jobs that support our passion of making music. We focus on the music, do our best to make something that we’re proud of and then send it off into the world. Anything else that comes from that is just icing on the cake! FTR: What’s next for Bodies Be Rivers?We’re just going to keep doing what we’ve always done. We’ll practice, write, practice some more, play some shows… Music is a constant part of our flow and that’ll always be the case for us. We hope to continue to produce music, record and keep putting our art out into the world!
Things I’ll Tell You When You’re Older is out now. Click HERE for more information on Bodies Be Rivers.