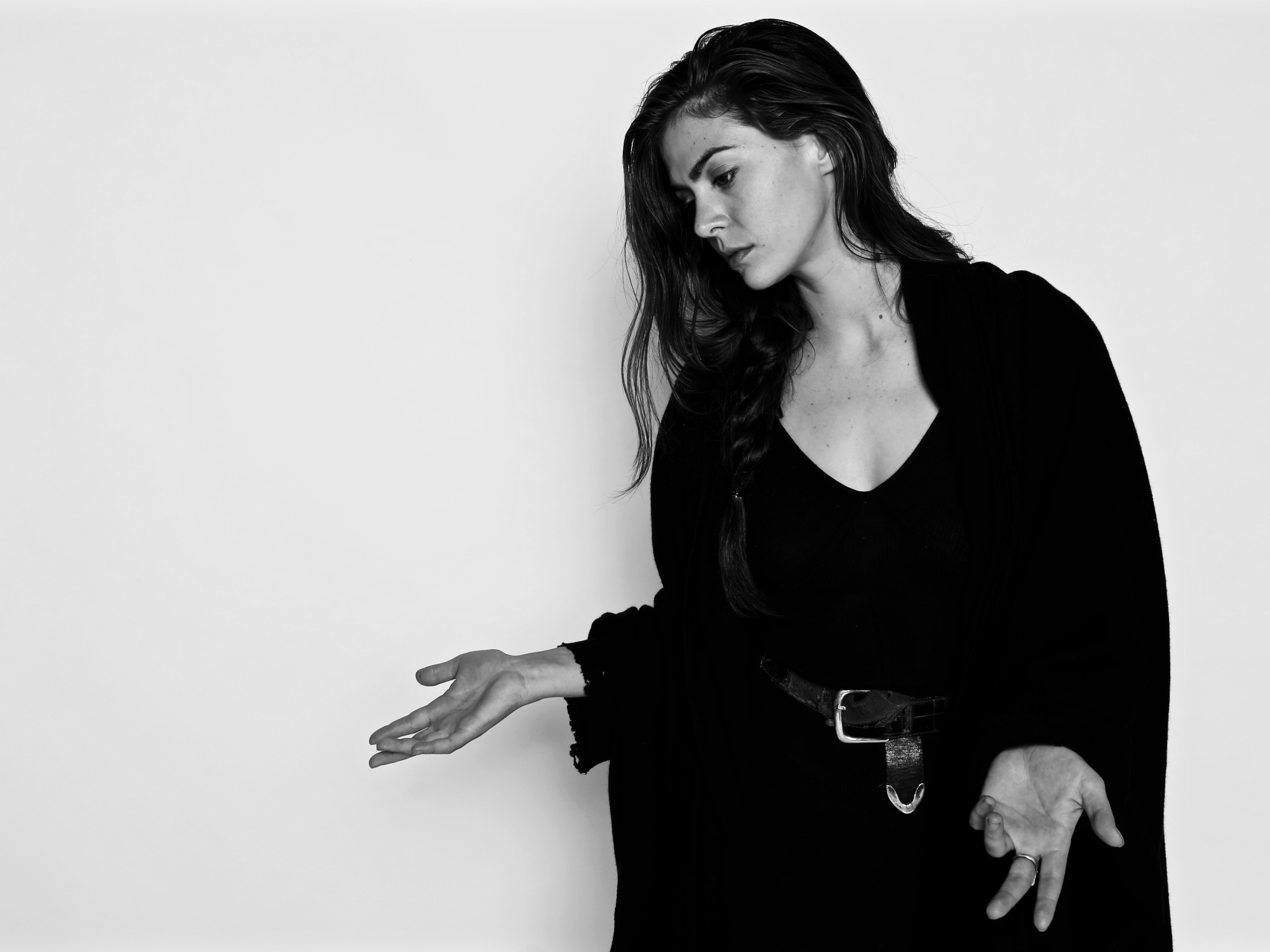 “At that point of my life everything was falling apart and what hadn’t fallen apart was in the middle of disintegrating”.

It would be fair to say that Shades, the upcoming debut album from Vera Sola, does not come from a place of anything even remotely resembling stability. A perfect storm of family illness, the loss of her day job – Vera works in radio and as a voice-over artist away from the musician’s life – and probably the most emotive US election result in living memory, created what she describes as, “a personal cataclysm”. From the tumult and darkness though, emerged a new found creativity, a spark of light at the end of a very long tunnel, “it seemed like the only thing that I could do, because there wasn’t any other reason to keep on”.

Ahead of Shade’s release this month, and upcoming tour dates across the UK and Europe, we sat down to speak with Vera Sola. Off the back of a month of dates in the American mid-west, Vera was back in her current home of Los Angeles, a place she finds more relaxed and healthier than New York, where she spent half her childhood, “it’s a cliché but the weather helps quite a lot”. Vera recalls the moment she was sure she wanted to leave New York, “I went to practice for a show and I was practicing some soft piano lines, and, I’m not joking, five different Slayer cover bands were competing around me, it was like they’d scheduled it at the same time so they could see who could do Reign In Blood best, it just kept getting louder and I was like “I don’t know if I can do this anymore”. It’s a typically entertaining annecdote, and quite possibly the best reason for uprooting your life we’ve ever come across.

There’s a strong chance you don’t know Vera Sola, yet she’s been making a living as a touring musician for many years, primarily as the bass-player in Elvis Perkins’ band: “he’s my mentor in many ways and I’ve always looked up to him as a songwriter and as a musician, he’s the whole reason why I ever came out and started playing music professionally in the first place”. It’s even more unlikely you know that Vera also writes songs herself, and in that you’re certainly not alone, “there was  no indication to anybody that I was making my own music. Even my family didn’t know, they knew that I played music obviously, but they didn’t really know what my songs sounded like, nobody did”. It was only when a friend invited her to take part in a songwriting workshop that Vera shared her music with anyone; she wrote four songs for the process and three of them would go on to form part of her debut album, Shades.

Inspired by the process and the personal chaos, Vera set about finding somewhere to record her debut album, “a friend of mine had a place in St Lois and I knew I could go there and be away from mostly everyone that I knew”. In the studio the pair would just set up a microphone and record for hours and hours, “one thing I liked about the studio was that I could live in it, and I could inhabit that world. When I start something I can go for six, seven hours and I wanted to be able to work long unbroken stretches without having to worry about time and money”. Initially, the plan had been to bring other musician’s in to work on the project, however as it went on, that didn’t seem to fit the plan, “I have so many brilliant friends and for the next one I will definitely not be the only person playing on the record. For this record, I wanted than unbroken energy and unbroken feeling to go through it…it just felt wrong to go back in and put other people, or other energies onto it. It felt like a sort of holistic world, it really is of a time and of a place in my life”.

Despite the record’s single-voiced creation, it is a world away from the traditional singer songwriter blue-print, “I guess that means I did my job, because I wasn’t looking to do a singer-songwriter record”. The resultant album is rich and textured, full of complexity and intrigue; one moment deeply personal and internalised, the next universal and wide-ranging. There’s a huge variety to the music; Virgil’s Flowers with its booming strut and Spectorish rhythms, the light touch of Small Minds with its deceptively tough lead character and the painfully sad, Black Rhino Enterprises, a tribute to the beautiful creatures sad demise, all eerie double tracked vocals and meandering keyboards.

Vera has spoken of the record as being from the point of view of a number of, “feminised characters”, yet despite being a record full of characters, there’s equally a feeling that there’s plenty of herself on show in their stories, “I write from the perspective of other people. I put myself in their shoes, or become them when I’m singing. If I’m singing from the first person perspective about someone’s experiences I can’t help but feel that. It comes across in my live performance, I feel so deeply that I can’t help but cry, or I can’t help but contort my face. I get a lot of shit for it because people think it’s acting, but it’s really not. I’m feeling everything that I’m singing. But yeah, of course there’s a lot of me in there, I did the whole thing myself”. The album is book-ended by two more obviously personal songs, the opening Virgil’s Flowers and the closing number, New Nights, however other tracks only revealed their personal nature to Vera long after they were written. The Cage is one such example, originally written as a conversation between Eve and God, it was only some six months afterward that it clicked: “recently I was like actually that is about my life, that is my experience, and my experience specifically in the family I was born into. Here is this beautiful world, you’ve been born into it, enjoy it, it’s a stunning place, but just remember that you’ll always be second, you’ll always be derivative”.

If many of the tracks reveal a personal connection, many others take on a more political stance. We noted that many of the tracks sound like classic country songs, only with considerably stronger female characters than you would stereotypically associate with the genre, “I am full of anger and great sadness at the world, I don’t know how one can be a sensitive person and not be with what is happening in the world, and in the country I live in. I was definitely very, broken and tortured by the election and what that meant for being a woman and being a person in today’s world and that definitely came through. I don’t think I ever wrote political songs until the election”.

Perhaps the most overtly political moment on the record is The Colony, a track written as, “loosely the story of America, sung from the perspective of the collective white colonial consciousness”. The track was written, “after being at Standing Rock in North Dakota and feeling both this sense of sadness and horror at what was happening, and also this complicit-ness as a white person in America”. The track makes great use of a production technique used throughout the record, where two contrasting vocals, both Vera, are used to portray different sides to the same story, “I do that quite naturally because I’m a voice-over actor but there were a number of tracks on the record that I really wanted to be delivered in a certain tone… I think about The Colony, there’s a casual dismissiveness to the vocal and tossing off of these words especially that was very important to me. It expressed the sentiment of what I’m saying, which is, “I’ve done all of these things and I don’t really care”. Which of course isn’t my sentiment but that’s the sentiment of the character”. The result is an intense track, almost deliberately vulgar and unnerving, it dares you to drag yourself away from this nightmare, and yet somehow draws you in. Vera recalls the first time she played the track to Elvis Perkins, “the look of profound shock and terror and confusion and disbelief on his face when I played him the song, that I had just gone out there and made that thing. That was a big push that maybe people would be interested in hearing this, he says it’s his favourite song ever written, which is hilarious to me”.

Elsewhere the dual voice is used quite differently, expressing a particular sort of femininity, “I have a very low speaking voice, and generally tend to have a lower register, but I wanted these ones as they are topics of what it means to be a woman, I wanted them to have that archetypical, or stereotypical feminine tone to it, well in The Cage it goes from that to that sort of breaking, broken-down, enraged howl. Which is important to me, it’s performative”. That performative aspect, the idea of different voice, different characters, all plays into the album’s title, Shades. It is not a one-dimensional title, at Vera explains, “most things that I tend to put my thumb print on have many layers and it’s just the way that I am. It can be pretentious or heavy-handed sometimes but that’s just me…Shades is just different shades of me, different shades of people, of femininity, but specifically it’s referring to the Shades of Greek Mythology. The inhabitants of the underworld that will come over and bring messages to the living or swirl around in hell, it’s also another word for ghost. So the record is ultimately about ghosts, not just dead people or spirits, but all the way we can think about how a person can be haunted, whether it’s by a memory or by a lover, whether that lover is from the past or from the present. Like being in the room with a person and they’re just a shade of themselves, they’re not there anymore…also shades of me of course, because all there is different shades of me on there”.

We ask if Vera has any aspirations for this record, one she never planned to release, and now finds herself self-releasing, “expectations I believe are dangerous, nothing I ever expected to happen has ever happened so, I just keep it open, and hope that a couple of people listen to it, and come out to see the show, and I can keep performing live because that’s what I want to do, and what I love to do”. Perhaps Vera’s correct to expect nothing, perhaps the job is done, the goal of finding some purpose has been achieved; a record has been created that fizzles with human emotion and whether the world’s ready for it or not, this is undeniably music that needed to be made.

Shades is out November 9th via Spectraphonic Records. Click HERE for more information on Vera Sola.