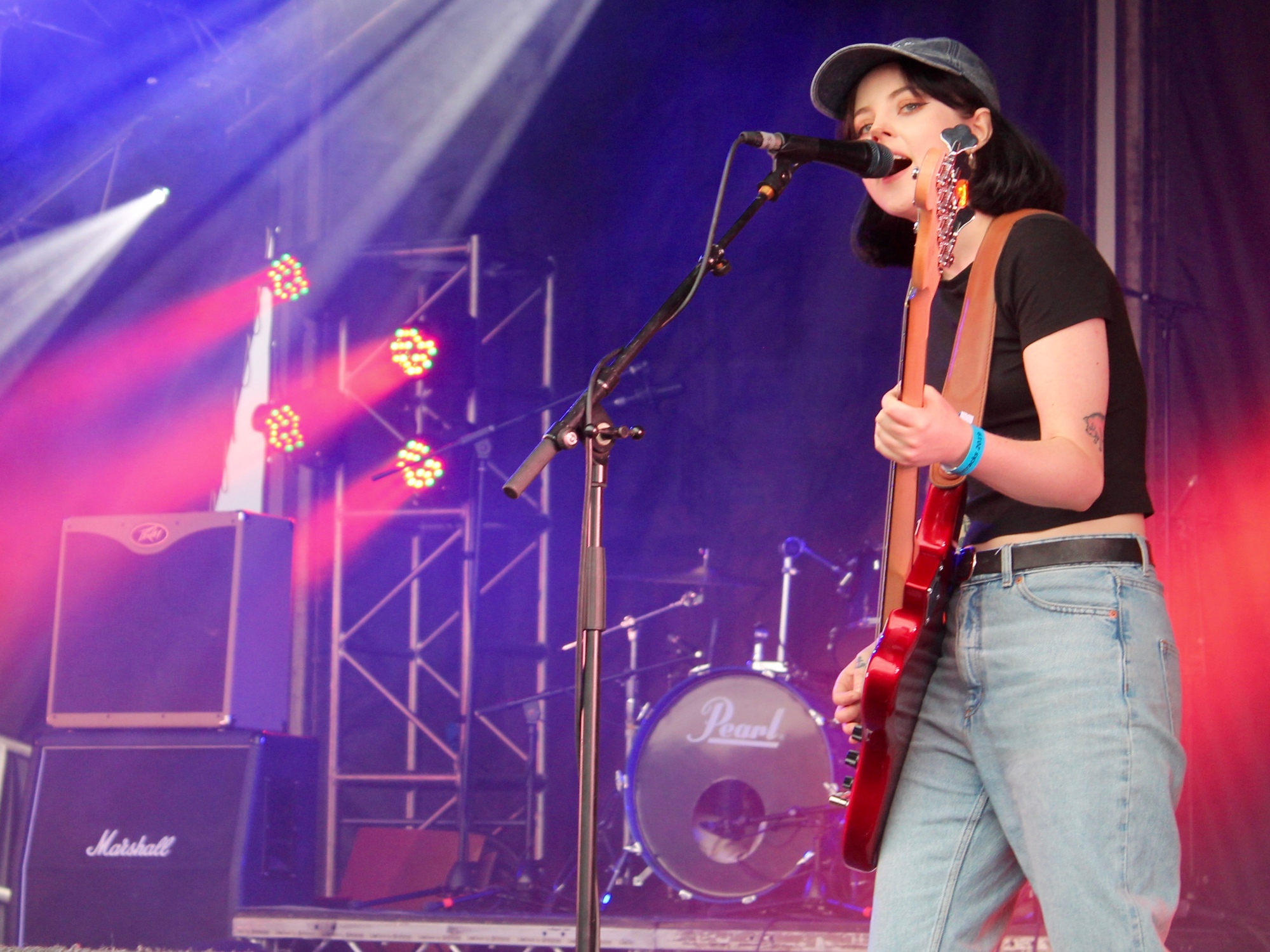 Indietracks has always been a festival that exists in something of a bubble, a cocoon of indie-pop away from the mainstream and the world at large. A place where bands like The Just Joans or Allo Darlin’ slip into DJ-sets as regularly as Carly Rae Jepsen and Lizzo, and bands who may struggle for a slot at other festivals, are treated like established Kings and Queens of a certain genre. While this might sound exclusive from the outside, in reality it’s a welcoming place, all are invited to revel, even if there’s a good chance you might not entirely understand why quite so many people are bawling their eyes out to The Spook School (more on that in part 2).

Opening proceedings on the abridged Friday night were Chester’s Peaness. Quickly becoming festival favourites, the trio are exactly the sort of band Indietracks is delighted to showcase. From their indie-pop sound, to their songs of anti-consumerism and playful stage patter, it was no surprise to see a large crowd gather. While it was some of the old favourites, Same Place and Oh George (remember when George Osbourne seemed as bad as politicians could get?) that got the biggest reactions, the sprinkling of newer material seemed to sparkle even brighter. They threw in some grungier moments and a general beefier sound suggesting they’ve become road hardened by their grueling touring schedule, without losing any of their charms.

If Peaness are a band just getting started, Bis are arguably at the other end of the scale. The Glaswegian-trio formed back in 1994 and reached their peak in the late-1990s with a string of chart bothering singles. The band parted company in 2003 before reforming on a slightly smaller scale in 2009. Bis aren’t newcomers to Indietracks, having played, what was by the sounds of it an ill-fated, set in 2013, that from the stage-chatter seemed to be the end of not just their rhythm section at the time, but of the band having a rhythm section at all, with a sampler now doing the heavy lifting. This year’s set was a more straight forward and thoroughly enjoyable affair, old favourites like Eurodisco and the brilliant Kandy Pop unsurprisingly drew the greatest reaction, yet newer material, without steering far from the original blue-print sounds every bit as good. A particular highlight was, There Is No Point (Other Than The Point That There Is No Point), from this year’s Slight Disconnects album, introduced by the band as being, “about the futility of existence, especially if you’re a failed pop-band from the 90s”. They might be unlikely to splash back into the charts anytime soon, but Bis proved themselves to still know how to throw a party!

If Bis were the ghosts of Indietracks-past, perhaps The Orielles are its future. The youthful Halifax-band, are clearly a band on the rise, after their well-received debut album, Silver Dollar Moment, drew near universal acclaim on its release on Heavenly Recordings. With a sound melding elements of funk, world-music, brit-pop, and anything else they can get their ears on, they end up having some of the swagger of The Happy Mondays, although hopefully without all the additional baggage. Arguably their sound isn’t quite suited to a Friday-night, and the live show was more impressive than captivating, however the potential here is huge, and the new tracks they threw in already felt like some of their strongest to date, the world is their oyster.