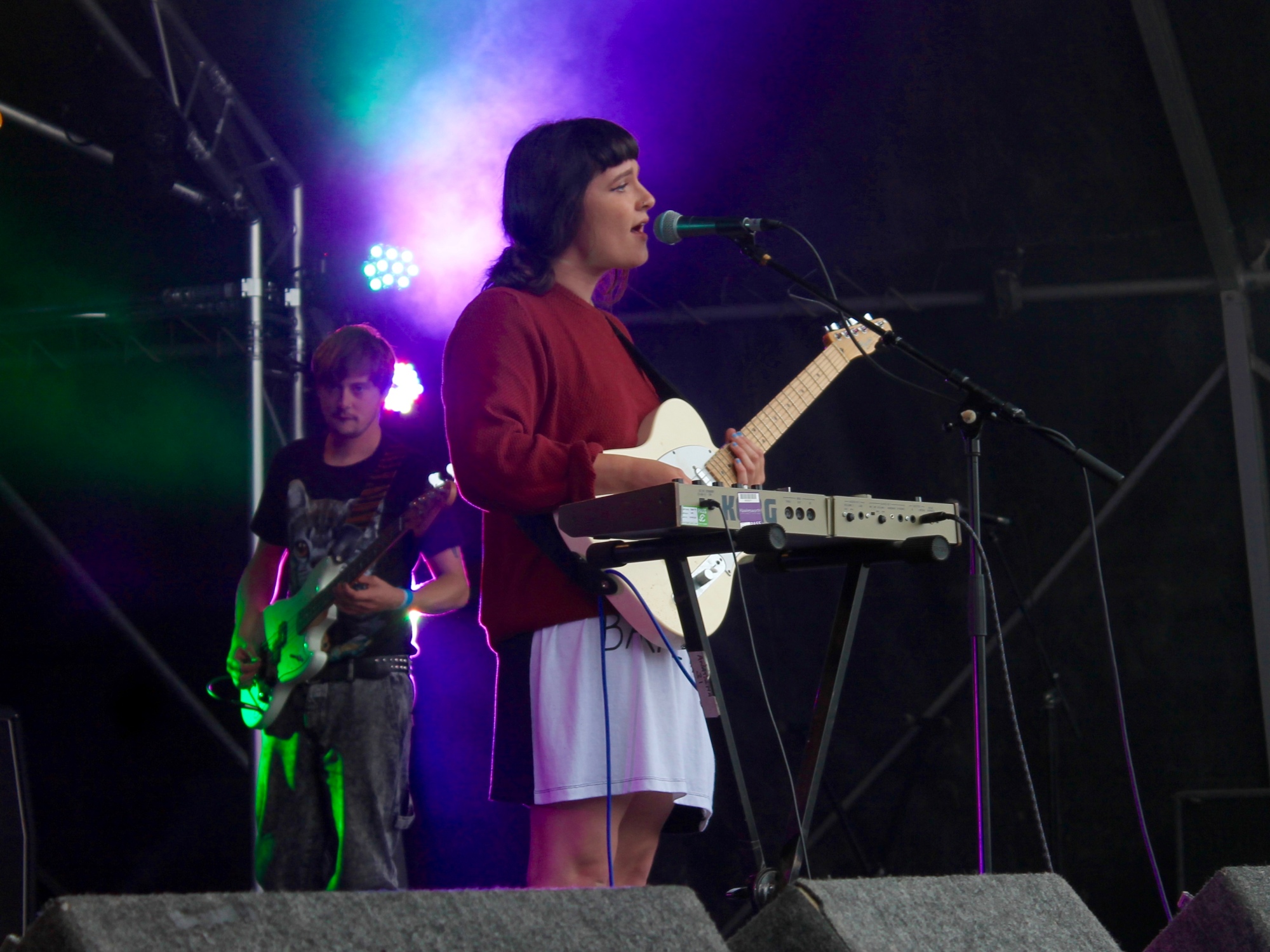 After all the emotion, dancing and somewhat punky-thrills of Saturday evening, Sunday at Indietracks always looked like a somewhat more sedate and thoughtful affair, or at least that was how we decided to navigate it.

Whether it was the thrill of their emo-tinged indie-rock, or the somewhat ominous skies outside, Oxford’s Junk Whale dragged a decent crowd down early to The Indoor Stage. Originally formed by Joe and Hannah, with the aim of writing a song, every week, for a year to raise money for Charity, Junk Whale have now expanded to a four-piece live band. There’s something a little retro about their sound, throwing back to acts like Hundred Reasons or Jetplane Landing, yet there was something quietly charming about them, not least a surprising Lana Del Rey cover. 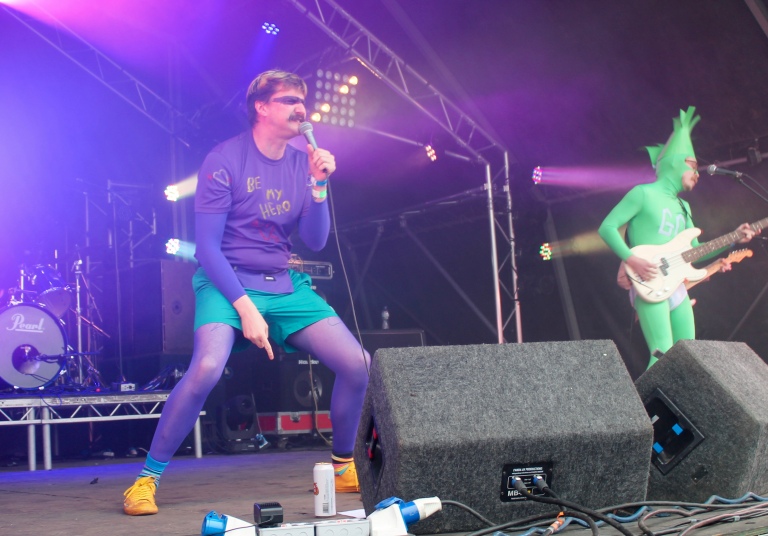 Next it was over to the main stage for the lyrca-clad, super-heroes of Squiggles, who informed us they weren’t a band, they were the start of a cult dedicated to tackling mental health. This cult happened to be led by Niall from The Spook School, and early recruits were familiar as members of Life Model. This was their first ever show, and while it was, as you’d expect, a tad shambolic, it was hard not to smile throughout. At times we were put in mind of The Hives, with charisma and stage craft to the fore. At the close Niall jumped into the crowd to hand out sign-up sheets, and there were no shortage of people wanting to join the movement, the start of something for sure, the start of what, we’ll probably work that out later.

We take in a delightful bit of Rosehip Teahouse and their magnificent vocal stylings, unplugged in the Church of Merch, before catching the end of Anglo-German dream-pop act The BV’s, who sounded good enough to have us wondering why we didn’t get down to The Indoor Stage earlier. 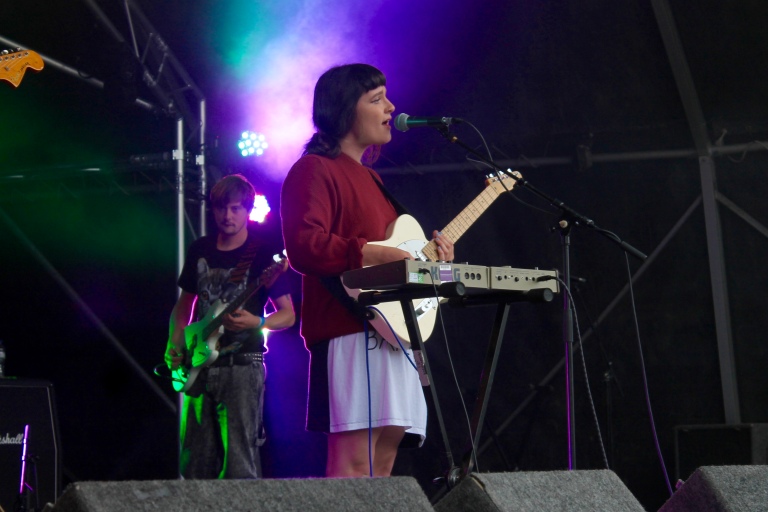 From there it was back outdoors for one of our most anticipated acts of the weekend, Falmouth’s L I P S. They ran through a set lifted heavily from their recent self-titled EP, which translated just as well live as we’d imagined. Vocalist Rachel Anstis is the star of the show, quite possibly the voice of the weekend, with her airy delivery a perfect contrast to the reverberating sonic tapestries the band create. They even threw in a surprisingly wonderful cover of Orange Juice’s Rip It Up, which while dedicated to the dads, was enjoyed by even the childless among us. Perfect cloudy afternoon music, their blend of dream-pop and classic-indie was a delight throughout.

From there we just about crammed ourselves into The Church in time to see local heroes Grawl!x, a band entirely unlike anything else we saw over the weekend. With a set spanning both their three concept albums about death, and material from their as yet untitled new album, it was clear to see just how much the band has evolved. From their muted and cinematic early material, to the more eclectic and driving sounds of now, it was a fabulous combinations of sounds and genres, like a choral-church-punk-electronica hybrid. Rapturously received in the pews, they felt like the weekend’s best kept secret. 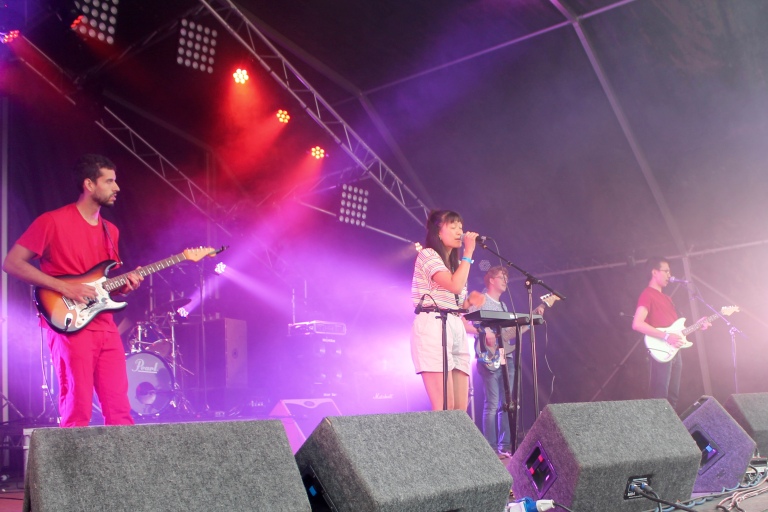 Making quite possibly the most ambitious pilgrimage to appear at the festival were up-and-coming Rhode Island quintet, Strawberry Generation. Quite possibly the most classically Indietracks-sounding band ever, their heart-melting jangle-pop offered tales of heartbreak, hope and self-doubt, as old as indie-music itself. Coming across like the middle ground of The Pains Of Being Pure At Heart and Tullcraft, it’s a hugely accomplished and well received set from a band to keep your eyes on.

Continuing a day of stage-hoping, we headed indoors for a packed-out set from Advance Base, aka former Casiotone For The Painfully Alone frontman, Owen Ashworth. A hearing issue may have made him turn down the louder moments, yet his wobbly keyboard melancholy remains as enchanting as always. It’s not the sort of music that perhaps lends itself naturally to a festival, yet in his beautiful Elvis Depressedly meets Sparklehorse, there was an honesty and longing that’s hugely effective. At times there was even a bit of early My Morning Jacket in the gentle country-licks, and we can’t think of much higher compliment than that. 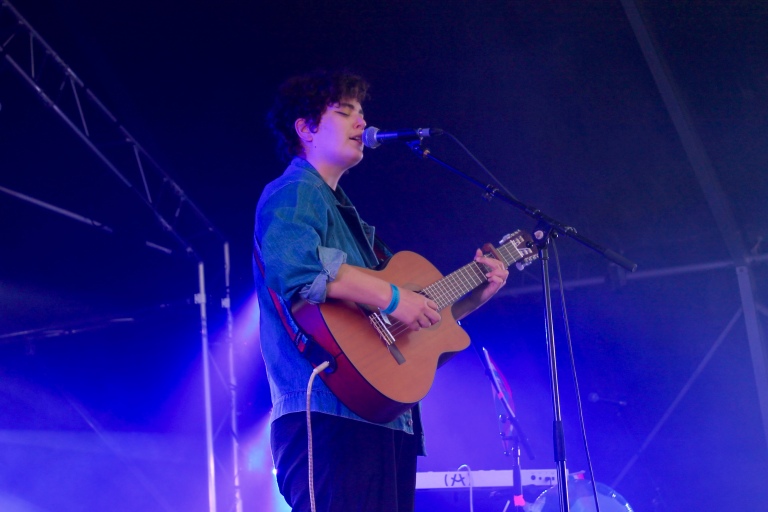 “People told me this was the twee festival, but twee can be queer right?”, and in a single sentence Adult Mom pretty much won over everyone in the crowd. It helps that their acoustic heart-pouring and tales of coming out and regretting not doing it earlier are so utterly beguiling. Armed with just an acoustic guitar, Stephanie Knipe worked the crowd like putty, demanding they sing along to a cover of The La’s and drawing hushed reverie throughout. Although quite removed from the recorded material we’d heard previously, we sure we won’t be alone in going back to check if the album’s live up to the live show. 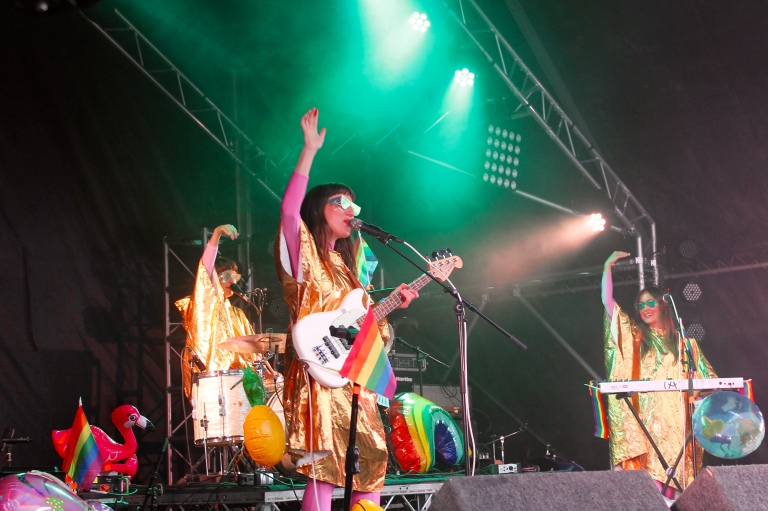 Although not headlining, Stealing Sheep could probably make a pretty good claim to be the biggest name appearing at the festival this year and the Liverpudlian trio were almost certainly the most professional performers. With choreographed dance moves, robotic introductory vocals and an awful lot of gold shiny things, they’re both a lot more fun and have a lot more great songs than we’d ever realised. Not a band we’d ever have thought to book for Indietracks, but we’re very glad someone else did. 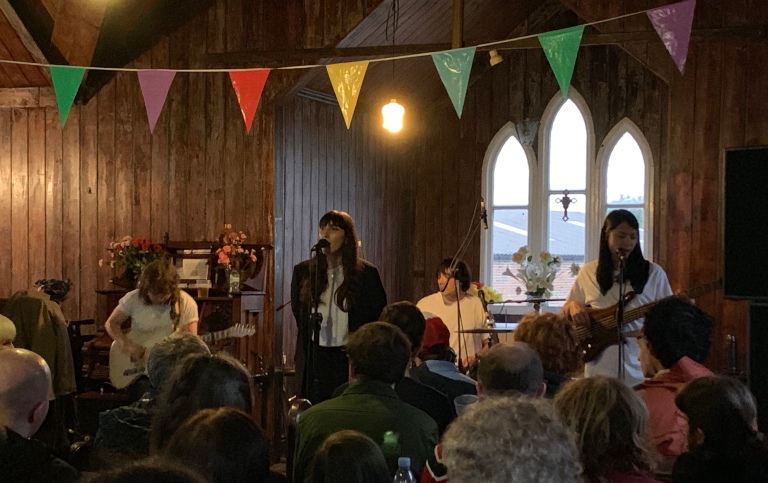 The closing performance on The Church Stage comes from one of our favourite new acts on the indie-scene, London/Brighton quartet, Foundlings. The band only emerged at the start of 2018, and have already caught the ears of many with their take on shimmer indie-pop. With guest guitarist Jemma Freeman filling in, their live sound is a bolder and more rambunctious affair than their recorded material, vocalist Amber even insisted we rise to our feet for the opening number, like a very unlikely gospel preacher. There was some new material scattered among favourites from the self-titled EP they released via Last Night From Glasgow, suggesting that while this was their first appearance at the festival, it is highly unlikely to be the last.

Closing proceedings for the festival as a whole were Kero Kero Bonito, a band who, if we’re completely honest, go entirely over our heads. People seem to absolutely love them though, and a huge crowd braves the rain to dance along with them. We’re quite happy to retreat to the train bar and process a truly wonderful weekend of music, already speculating who might entertain us next year, meet you there?

You can look back on the other day’s of this year’s festival HERE.